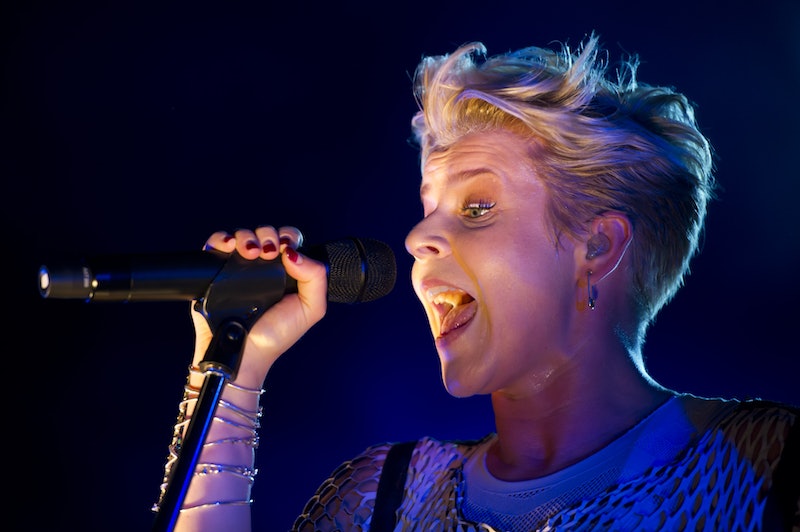 If you're not already her biggest fan, then the name Robyn should at least ring a bell. She's had a slew of hits in the UK, and her most famous song "Dancing On My Own" was played loads on the radio last year. But it wasn't Robyn's voice you would have heard. It was the slowed down cover version from singer Calum Scott, which showcased the great simplicity and sadness behind Robyn's original club banger. You might not know it, but Robyn is one of the most influential musicians today. Her new album is out now and here's why you should listen to it.

The world of pop would look drastically different today if Robyn had made some slightly different choices. Starting her career as a teenage pop star, the Guardian's deputy music editor, Laura Snapes, recently wrote about how a young Robyn rejected the song which went onto become Britney Spears' breakout track: "...Baby One More Time".

"Robyn entered the music industry with a feminist outlook," Snapes writes, and after experiencing the patriarchal world of the music industry as a teenager in the '90s, she reemerged in 2005 "with her own independent label and a new electronic sound." She came back again five years later with the critically and commercially adored album Body Talk, which set Robyn apart from just about every other artist in pop.

More than ever before, Body Talk showcased Robyn's unique and nuanced takes on pop's favourite subjects — dancing, falling in love, and heartbreak. On single "Call Your Girlfriend," she talks her lover through how to leave his girlfriend for her. With a complexity rarely heard before, she sings to him, equally with sympathy for the girlfriend and her own selfishness: "call your girlfriend, say it's not her fault."

But it's been eight years since then, and as you can hear on new album "Honey," her sound has slightly shifted. It's still uniquely Robyn, with its deliciously faddy house beats and swoon inducing synths, but it's the singer laid more bare. On the album, she's clear about what she wants the music to make you feel, and she gets right to the crux of each emotion in the plainest terms possible. "I'm a human being," she sings on "Human Being," "And so are you". It's a call to get her listeners dancing, like she's nursing them into movement: "Don't be afraid/One step at a time," she aids.

And let's face it, at a time when musicians like Drake are making albums that are 90 minutes long, the succinct nine track, 40 minute long playtime on "Honey" is really, really welcome. And the critics are living for it too. It got a glittering five star review from The Guardian, whose reviewer, Alexis Petridis simply said: "Honey is perfect".

While Pitchfork gave the album their coveted "Best New Music" title. Senior Editor Stacey Anderson writes that Robyn's music is full of "deeper, even beautiful, glimpses into our humanity," and if that's not reason enough for you to give Honey a go, then you have my personal promise — Robyn's new album just straight up slaps.