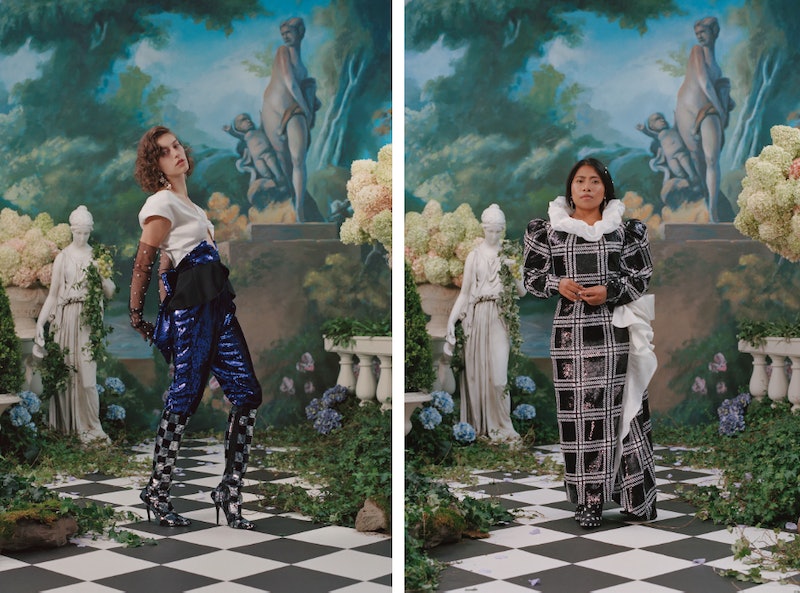 Rodarte's romantic fashions have made the luxury brand a red carpet favorite among celebrities. The brand's signature style comes to life in Rodarte's Spring 2020 campaign, which is filled with famous women like actors Kirsten Dunst, January Jones, Alexa Demie, and more. The models are a balanced mix of established household names and rising stars from all backgrounds and sections of the entertainment industry — and they're all united by fabulous and frilly couture.

The images spotlight Rodarte's forthcoming collection, where tulle, taffeta, puffed sleeves, dropped waists, and larger-than-life ruffles reign supreme. The clothes are a collision of different decades and aesthetics. The models pose in front of statues and in gardens, giving off an ethereal energy that is typical of Rodarte. Ultimately, the lookbook feels like a portrait series from another time and place, which was completely intentional.

"We wanted to create painted portraits," Rodarte's Laura Mulleavy, who founded the brand alongside her sister Kate, told Vogue about the designs and the element of mystery surrounding the women wearing them. "In the end the images have that quality, not knowing whether or not someone has been painted or photographed."

The campaign also features the reunion of former Mad Men co-stars Jones and Shipka. It's totally thrilling to see the onetime onscreen mother-daughter duo posing in these images. Mad Men went off the air back in 2015 after seven season. Therefore, these campaign shots feel like a glimpse of Shipka's little Sally Draper all grown up.

Here are some of the collection's statement looks going clockwise from top left. The Haim sisters slayed their roomy, metallic ensembles with dropped waists and decidedly '80s silhouettes, while King Princess rocked an electric blue and sequined two-piece with puffed sleeves. Reinhart went full on ball gown — and with a puppy — while Qualley's tri-color dress with the bows on the shoulder and hip just might remind you of your mom's prom.

Speaking of prom, these are some of the dreamiest prom-like looks from the campaign. Ruffles often factor into Rodarte designs across seasons and Spring 2020 was no different. Jones and Shipka stunned in their formal, full, and floral frocks that you are bound to see on the red carpet at awards shows like the Golden Globes and Oscars next winter. Rowan Blanchard's ice blue dress with the sparkly, beaded bodice had such a Cinderella vibe, while Kilo Kish served up a lewk with the statement bow and poufy sleeves of her seafoam green gown. Maya Erskine's two-piece taffeta ensemble balanced volume with ruffles.

Ultimately, Rodarte's 2020 campaign is full of frame-worthy images of strong and inspirational women.