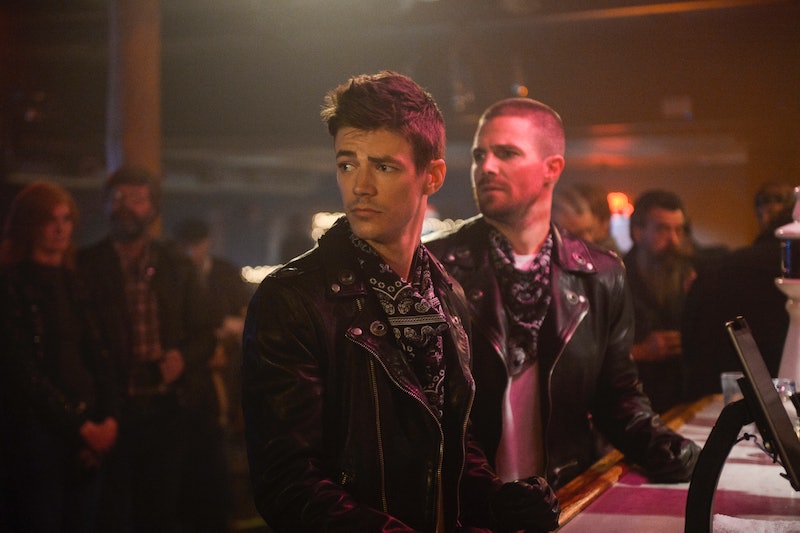 As if Lois Lane and Batwoman on The Flash weren't enough, the Elseworlds crossover is introducing even more comic book characters in the Arrow and Supergirl episodes to come. When the gang gets to Gotham City, some familiar faces may be peeping out of various nefarious corners. Like, for example, Roger Hayden (aka Psycho-Pirate), a DC comic character set to make his debut on Monday night's Arrow.

According to TVLine, Hayden will be played by actor Bob Frazer. The outlet also notes he got an Easter Egg shoutout back in the Season 5 premiere of The Flash Season 5, in which his name appeared in the text of Iris West-Allen's article about the Flash's disappearance in 2049.

"Research has focused on Roger Hayden, aka Psycho Pirate, who claims to remember the night's events. He said upon his arrest, 'Worlds lived, worlds died. Nothing will ever be the same.'"

Does that mean this character is here to stay, if Iris uses him as a source so many years later? Could be! In the comics, Hayden developed superpowers after being poisoned by Brainiac. While his name is Psycho-Pirate, his costume includes those "Comedy" and "Tragedy" faces you see symbolizing the theatre all the time. Maybe he's a Pirate of Penzance instead of the high seas. Anyway, Hayden's powers enable him to control the emotions of others and drain emotions from others if necessary. When someone stole those powers, he went to find an object called a Medusa Mask that gave him those abilities back. That said, in several other versions of the character, the Mask just helps him control and channel that power.

If you look closely, you can see the mask in the promo below:

Due to the nature of his supernatural skills, other villains like having him around for his calming effects. Hugo Strange is one of those baddies, as is Batman's foe Bane, and so are the Monitor and the Anti-Monitor. The latter happens in "Crisis On Infinite Earths," an event that only the Psycho-Pirate claims to be able to properly remember. He's recruited by the Monitor to save the Multiverse, and it doesn't end well. Those memories do a lot of damage to his mental health, and he ends up locked up yet again.

Sounds a lot like the reference made to his character on The Flash already, right? He also once used his powers to make Killer Frost and Firestorm fall in love, which should make Flash fans nervous... as that couple already has a past on the CW. All in all, this seems like a smart character to bring in at this point in the story. He may not be as infamous a DC comics character as the Joker, but he pops up quite a bit in various comic adventures.

Presumably, when he's introduced in Elseworlds, Hayden will be imprisoned at Arkham Asylum when the Flash, Arrow, and Supergirl heroes come calling on Batwoman to see what the Monitor is up to and why Barry and Oliver are doing a Freaky Friday body swap. If Iris' article is any indication, Hayden bares witness to all the events to come — if he's not a major player in those events himself.