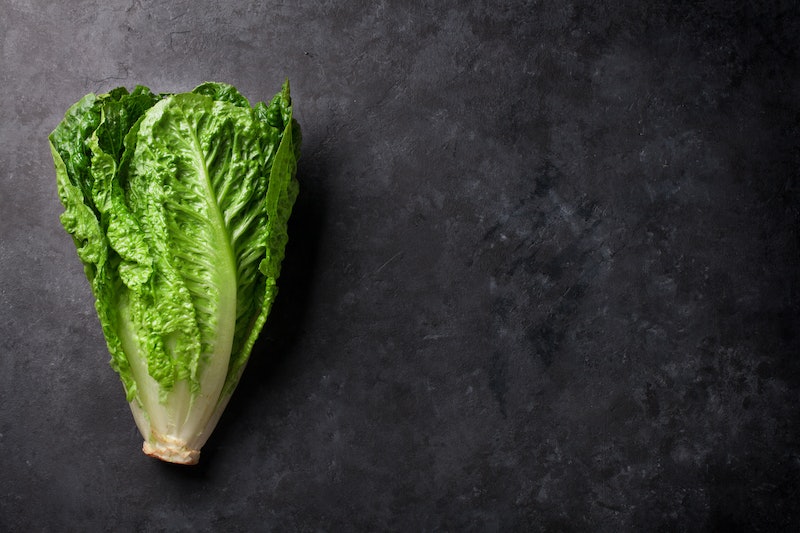 If you like salads — or just lettuce in general, really — I'm pretty confident that you're going to want to check out this news. Personally, I'm all about salads, especially romaine lettuce, so this is a pretty big deal for me. According to NBC News, Consumer Reports has warned that romaine lettuce may be linked to an E. Coli outbreak, so the consumption of all salads made with everyone's favorite, non-kale greens should be paused until officials confirm that it's safe.

Update: On Friday, April 20, the Centers for Disease Control issued a warning against eating all types of romaine, including heads of the lettuce, chopped romaine, and salads with romaine. "Do not buy or eat romaine lettuce at a grocery store or restaurant unless you can confirm it is not from the Yuma, Arizona, growing region," it said on its site.

Earlier: Per the news agency, the consumer advocacy group called on the Food and Drug Administration (FDA) and Centers for Disease Control and Prevention (CDC) to warn shoppers about a recent outbreak of E. Coli infections, which have affected 58 people in the U.S. and Canada since starting in November. "The Public Health Agency of Canada has identified romaine lettuce as the source of the outbreak in Canada," the CDC said in a statement on Dec. 28, when news of the outbreak was released. At that point, American public health officials were still in the process of interviewing sick people to figure out if their illnesses could be attributed to the same leafy source.

The CDC and FDA have yet to confirm whether or not they believe that romaine lettuce caused the cases of E. Coli here in the U.S. "There is not enough epidemiological evidence at this time to indicate a specific source of the illnesses here in the United States," CDC spokesperson Brittany Behm says in a Jan. 3 statement on the Consumer Reports site.

However, until more watertight evidence can be found to confirm that romaine isn't the root of the problem, Consumer Reports urges people to avoid buying it. "Even though we can't say with 100 percent certainty that romaine lettuce is the cause of the E. Coli outbreak... a greater degree of caution is appropriate given that lettuce is almost always consumed raw," says Consumer Reports Director of Food Safety and Research James Rogers.

Other consumer advocacy groups urge similar caution — and for American public health agencies to follow the lead of their northern neighbors. Jean Halloran — Director of Food Policy Initiatives for Consumers Union — said in a Jan. 3 statement that the "available data strongly suggest that romaine lettuce is the source of the U.S. outbreak."

Per NBC news, E. Coli bacteria are fairly prevalent in the world around us. As a result, they generally live in our digestive tracts, and are totally harmless. The few forms of the bacteria that cause infection, however, can really wreak havoc on the body. According to stats from the CDC, 48 million people are affected by the 250 identified food borne illnesses (including E. coli) annually — 128 thousand of whom are hospitalized. The E. Coli toxin, specifically, causes severe stomach cramps, diarrhea, and vomiting. In serious cases, victims can experience hemolytic uremic syndrome, which is a type of kidney failure.

If all of this isn't enough to put your romaine-buying on hold until we have more information, then I have serious questions as to how exactly you plan to best steward your health in the new year. While salads are obviously well known for their nutritious properties — and for their good taste, if you're like me and actually like salads — the threat posed by E. Coli is a serious one. Above all, it's important to stay safe and healthy in the face of an outbreak like this one. Look on the bright side: Romaine lettuce may be delicious in a salad, but so is kale, arugula, and mesclun mix! There are options!