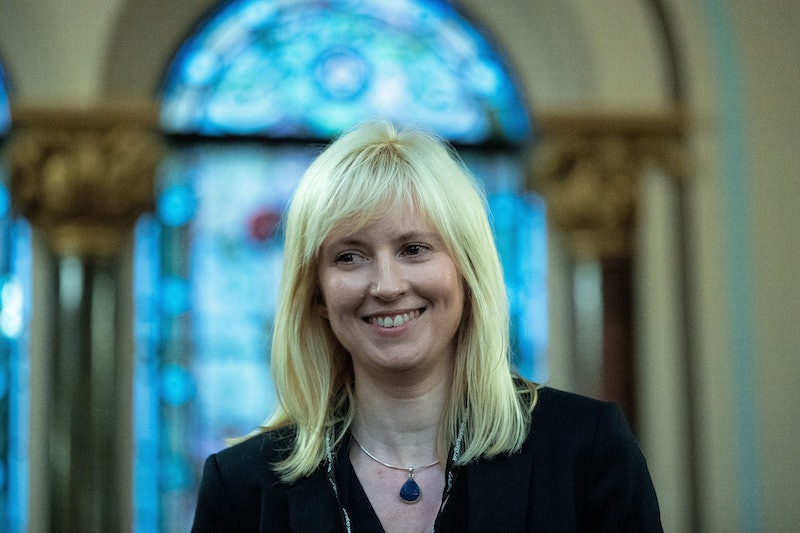 In a rare and touching moment, many members of the House of Commons were moved to tears following Rosie Duffield's speech in parliament about domestic abuse during a debate. In her emotional speech, Duffield who is MP of Canterbury recounted the abuse that she was subjected to at the hands of her ex partner and detailed intimate moments of the abuse. Her openness, courage, and clarity led to a huge round of applause and a standing ovation from her fellow MPs.

On Wednesday, Oct. 2, the Domestic Abuse Bill had its second reading in Parliament since the now-overturned prorogation of House of Commons. The bill was originally introduced in July, with the aim to legally obligate councils to offer secure homes for those escaping domestic violence, including their children, and to create a dedicated domestic abuse commissioner, as the Independent reports. Additionally, it would expand the statutory definition of domestic abuse beyond the physical to include controlling and manipulative behaviour as well as economic abuse. The new law would also bring in new Domestic Abuse Protection Notices and Domestic Abuse Protection Orders so that victims would have additional protections and offenders would face more restrictions.

But, when the bill came out, campaigners thought that it had not gone far enough as it did not recognise the “gendered nature” of domestic abuse nor did it address the cuts to services for victims.

During the second reading on Wednesday, Duffield discussed her personal experiences with domestic abuse, detailing the ways in which she suffered due to the actions of her ex-fiancé. Duffield opened her speech by speaking about the stereotypes surrounding domestic violence, saying that the "soap opera scenes" do not take into account the larger, complex components surrounding this issue.

"Domestic violence has many faces," Duffield said, "and the faces of those who survive it are varied, too." She went on to speak about the statistics surrounding abusive relationships, saying that, of the 650 MPs in the House of Commons, it is "highly likely" that some of them have experienced abusive relationships or grown up in violent households.

She then spoke about coercive control, stating that the current narrative of the victim having bruises and physical signs is not only narrative and often abusive tendencies can’t always be seen early on in a relationship. She said in part:

"Abuse is very often all about control and power, it’s about making themselves feel big or biggest, but that’s not how abusers present themselves," Duffield said. "It’s not how they persuade you to meet them for a coffee, then go to a gig, then spend an evening snuggled up in front of a movie at their place. When they ask you out, they don’t present their rage and they don’t tell you that they like the idea of strong, independent, successful women, but not the reality. They don’t threaten, criticise, control, yell or exert their physical strength in increasingly frightening ways."

Duffield then detailed her personal experiences, describing it as "emotionally exhausting" and recounting the times she had to put on "a brave face and [pretend] all is good, fine, wonderful in fact." She spoke of "being yelled at in the car with the windows down," with her partner making "no attempt to hide behaviour during constituency engagements," describing the "humiliation and embarrassment now added to permanent trepidation and constant hurt."

Duffield closed her speech by reaching addressing her listeners and the public saying: "If anyone is watching and needs a friend, please reach out if it is safe to do so and please talk to any of us because we will be there and we will hold your hand."

After her impassioned speech, Speaker of the House of Commons John Bercow thanked her, saying her words were "simultaneously as horrifying and as moving a contribution as [he'd] heard in 22 years membership of the house."

Duffield has received support from many of her colleagues via social media, including MP Jess Phillips. Duffield later took to Twitter to thank people for their support, saying, “Thank you so much to everyone who's been so kind. It means an awful lot.”

More like this
Boris Johnson’s Leadership Is In Question – Again
By Bustle UK
Twitter's Reaction To The Great No.10 Exodus Is Comedy Gold
By Rachel Mantock
What Is Happening With Sheku Bayoh’s Case?
By Sophie McEvoy
Mollie King & Stuart Broad Have The Most Relatable Wedding Plans
By Sophie McEvoy
Get The Very Best Of Bustle/UK