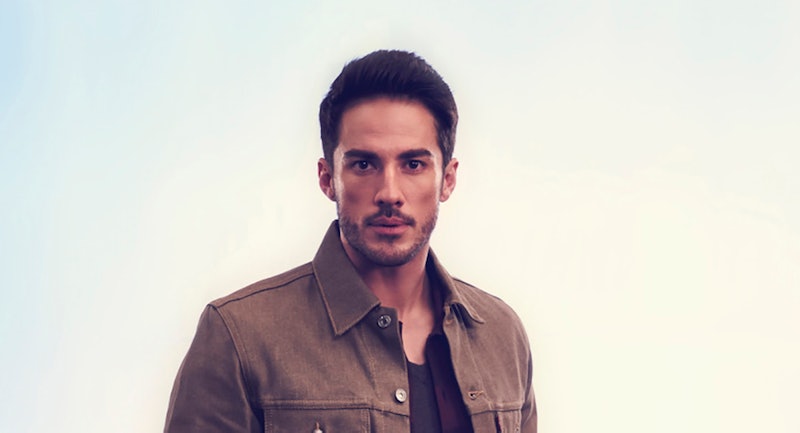 If we're playing supernatural YA bingo, Michael Trevino is definitely winning. On The Vampire Diaries, he played a human, a werewolf, a werewolf/vampire hybrid, a ghost, and then a resurrected human before playing a ghost again in the series finale. Now on Roswell, New Mexico, The CW's Roswell reboot, Trevino is alien-adjacent, taking over Nick Wechsler's original role of Kyle Valenti aka the human voice of reason caught up in all the alien craziness. But in the network's reimagining of the classic series, Kyle is aged up 10 years, an accomplished surgeon, and Liz's ex-boyfriend and current partner-in-crime in discovering the truth about Max's alien origins. And while Roswell, New Mexico may seem like it has a lot of similarities to The Vampire Diaries both behind-the-scenes and on-camera, Trevino's experiences on the two series couldn't be more different.

With his days on The Vampire Diaries behind him, Roswell, New Mexico is Trevino's first series regular gig since saying goodbye to his fan-favorite character of Tyler Lockwood just a little over a year and a half ago. But jumping back into a series regular role on network TV so soon after gaining his freedom from that rigorous schedule was "easy," according to the actor, because he felt comfortable with the same network, studio, and creative team behind both series.

"We had Julie Plec directing the pilot and [TVD spinoff The Originals writer] Carina MacKenzie was our showrunner and fearless leader here in our first season, so there was just a friendship already," Trevino tells Bustle. "Knowing that I was coming on board a project with friends, I knew I was going to take advantage of these relationships." That meant getting permission to shadow every director on set, and spending a few days in post-production in Los Angeles to gain a better understanding of the behind-the-scenes process of making a TV show.

Up until this point, Trevino had only known what goes into crafting a TV show from an actor's perspective, and he was eager to get a more holistic view of the process. So he learned it all, from how every department operates to what kind of prep work goes into making an hour-long episode of TV. He ended up not only surprised by how much he learned on Roswell, New Mexico, but also by the new perspective it gave him on his time on The Vampire Diaries.

"On Vampire Diaries, that was so many years on a series but I'd go there and just perform," Trevino says. "I was just learning what it takes to be on a series for 22 episodes out of the year. Now as I've matured, I'm older and I want to be more involved in different aspects of the whole process."

What surprised him the most about making an episode of TV was how much time is spent preparing before day one of production even begins. "Oh man, there's been so much work and so many meetings and decisions that have been made before you even start the first day of an episode," Trevino says with a laugh. "You'd think day one means day one, but no. Day one is like, we've already been working on this episode for months. It's a lot of decisions that are made in advance."

And that realization began to color some of his past memories of coming onto set as an actor on The Vampire Diaries. "If I have any questions, now that I've seen the amount of work that goes in prep, it's usually already been answered," he says. "Sometimes I've shown up to set and I'm like, 'Well let's see if they've even thought of this!' I'll ask a question or mention something or give an opinion on like, 'Well what if we did it like this?' And it's funny to look back now and know that in prep, all those questions I had or opinions about a scene they've already thought of and questioned and answered already."

That's why Trevino says that his time behind the camera on Roswell, New Mexico has also helped him as an actor. He now knows that "when you're given a direction, or if a line is written a certain way, it's written that way for a reason."

"The learning curve was really just gaining a perspective, because now I know how much work goes into prep," Trevino continues. "Now when I show up to set, I know I'm secure and taken care of because all of these questions that I have, I know they've been answered already. Just follow direction and trust your crew — we're all in this together and everything has already been figured out. Prep has been really eye opening for me. It's pretty crazy!"

While Trevino didn't get to direct an episode Roswell, New Mexico himself this season, he feels confident that all the knowledge he gained this year will certainly help move his career forward in the future, no matter what form that takes. "I just wanted to be there and be present and be involved; where this leads, I don't know," he says. "But I'd like to direct at some point, whether it's Roswell or something else. I'm just a sponge right now, just learning."

As for his character, Trevino stresses that this is "only the beginning" for Kyle and Liz's relationship as they work together to figure out just how much has been covered up in their town. This week's episode, "So Much For the Afterglow," starts to dig deeper into Liz's sister's death 10 years ago and how much Max may have had to do with it. Kyle's role in that is a far cry from the original Roswell, when he was constantly kept so far in the dark that he at times became the comic relief.

"Kyle is the moral compass of this show," Trevino says of how much his character knows. "He lives by a code, he's there for his family and friends and Liz. He and Liz had this romantic relationship before, but now they're adults so now it's about how can he protect her, be there for her and give her advice while also fighting these emotions he has for her. That's so difficult!"

He breaks off into laughter, then adds, "Can you imagine? That's so hard because he feels a certain way about her and always has, but he has to be stronger than that and not put himself first. You've got to remember, Kyle's cool — he's a surgeon, life is good for this guy. Now all of a sudden, all of this information he's learning, it's like this tornado is coming at him and he just has to go through it."

Will he survive it, or will he figure out how to thrive? We'll have to keep on watching to find out.