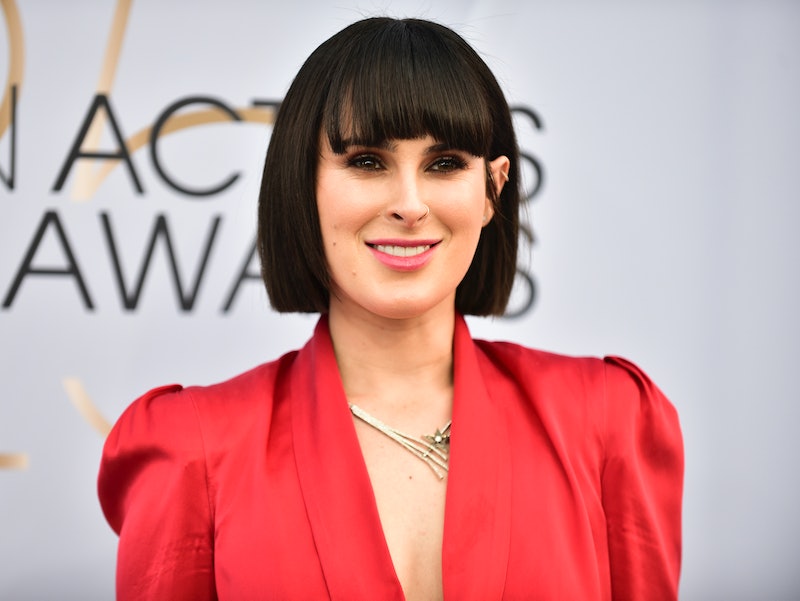 Since pretty much the very beginning, fans have been convinced that Rumer Willis is the Lion in The Masked Singer. However, the Empire star made a point of shutting down those rumors at the 2019 Screen Actors Guild Awards on Sunday, Jan. 27, claiming that she is in no way connected to the reality series. In short, Rumer Willis denies being the Lion in The Masked Singer, though it's up to viewers to decide whether her statement should truly be taken to heart.

"I am not," Willis told People Now during the People, Entertainment Weekly & TNT Red Carpet before the awards ceremony kicked off when asked if she was, in fact, the Lion. “All of a sudden when it started airing, I started getting all of these things in my Twitter feed and I said, ‘Oh, okay. Well, maybe I have to watch this and see what’s happening.' It’s pretty cool.”

That denial could be enough to convince some viewers that their guess is incorrect, but considering that Willis wouldn't have been able to confirm anything regardless (otherwise, what would be the point of the show?), there's still a very good chance she's the one hiding under that Lion ensemble after all.

E! News also spoke to Willis that same evening, and couldn't help but notice that her response was somewhat different for them. In fact, they received no such denial from her when the show was brought up. "My Twitter feed was going off and all of these things kept popping up," she told the outlet. "I was like guys, what is happening? I literally didn't know what to do. I was like, okay guys, I don't really know, but okay, this is cool. I think it was awesome. I really love the idea for the show."

That definitely sounds like someone who's trying to skirt around the topic without actually coming out and saying anything specific. If she were on it, Willis probably wouldn't be able to say anything about the show or confirm her involvement in it, so it would make sense for her to act like she didn't even know what the show even was. But doth she protest too much? Given the various clues we know about the Lion so far, all signs still seem to point directly at Willis.

For starters, the Lion considers herself to be "Hollywood royalty," and as the daughter of Demi Moore and Bruce Willis, that definitely makes the 30-year-old singer fit the bill. Then there's the fact that the Lion costume itself represents Willis in a variety of ways. For example, her zodiac sign is Leo and she used to have a lion tattoo on her arm. Not to mention that she's appeared multiple times on Empire, which centers around the Lyon family. But probably the most compelling piece of evidence is that the Lion was shown reading a newspaper called "Hailey Times" and Willis' hometown is listed as Hailey, Idaho.

Given all the evidence piling up, how could she not be the Masked Singer Lion? Odds are Willis is simply trying not to ruin the experience for anyone. (After all, guessing who's under each costume is big part of what makes it fun.) So even if she is lying, it's for the greater good. And if she isn't, well then, don't stop theorizing just yet.