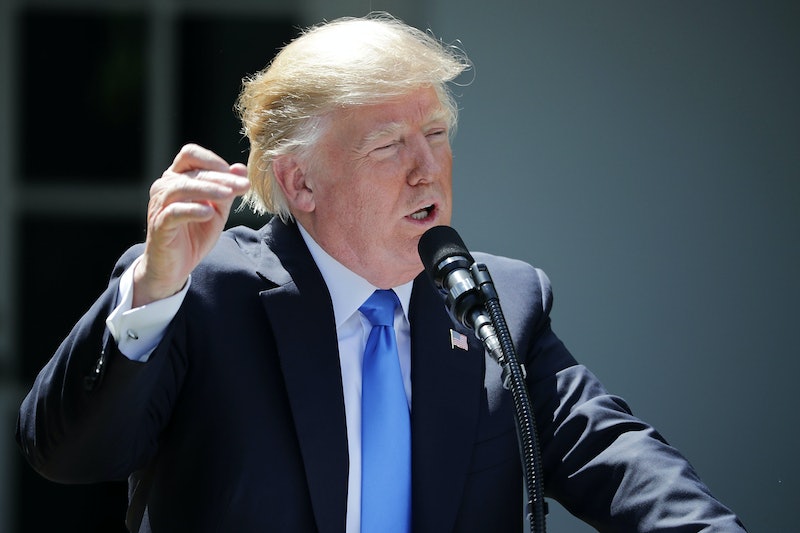 In a press conference on Friday afternoon, President Donald Trump alluded to taped recordings of his conversations with former FBI director James Comey. Shortly after, leaders of the House Russia investigation officially requested that the Comey tapes, if they did indeed exist, be handed over to them.

According to Politico, the request came from Texas Republican Rep. Mike Conaway and California Democratic Rep. Adam Schiff, the two men currently at the helm of the House's investigation into the Trump-Russia affair. They're also looking into the investigation's spillover effect on Trump's subsequent decision-making, namely whether the president attempted to obstruct justice when he fired Comey last month.

According to a statement, Schiff and Conaway have contacted Comey to request copies of his memos and any other documentation he has of his private conversations with Trump. And at the same time, they've gotten in touch with White House counsel Don McGahn too, requesting confirmation of whether any recordings of the president's meetings with Comey exist, and if so, demanding they be turned over to the House Intelligence Committee by June 23/ As of this writing, that's just two weeks away, meaning that there could be another round of news-making disclosures before too long.

The upshot here is that Trump's May 12 tweet suggesting he might have secretly recorded Comey is finally coming back around to bite him ― assuming, of course, that such tapes exist or have ever existed. In the event that they don't, Trump could likely clear the air and take some pressure off by simply saying so, and offering even a modest explanation, or an apology for suggesting they did.

During his Friday press conference, Trump also claimed he'd "100 percent" testify under oath as to the contents of his conversations with Comey, a statement that you can't help but wonder what his lawyer thought about. His comment today regardless, however, it seems far from guaranteed that his under oath moment will ever come, at least not voluntarily. Throughout the 2016 campaign, Trump made a number of legal threats that never ultimately came through, although he did follow through with a pair of lawsuits.

As for the tapes, Trump didn't get very specific, although he did somewhat cryptically remark that he'd address the issue "maybe sometime in the very near future." The only real question is whether that very near future will ever finally come around ― as his clinging to the baseless claim he was wiretapped in Trump Tower by former president Barack Obama showed, the president is rarely quick to backtrack or admit fault.