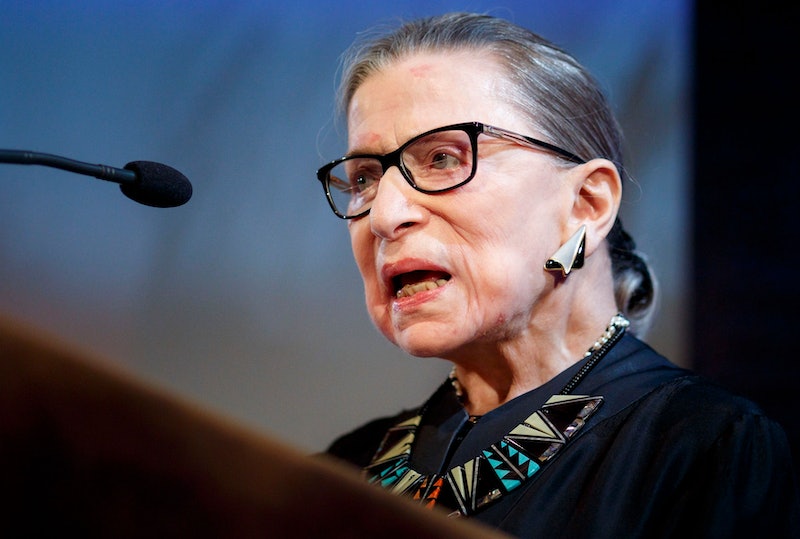 On Dec. 21, Supreme Court Justice Ruth Bader Ginsberg had two malignant nodules removed from her lung at a New York hospital, The New York Times reports. Ginsberg underwent a lobectomy to remove one of the five lobes of her lung to treat early stage lung cancer, says The New York Times, and the 85-year-old justice is on the road to a full recovery.

According to the statement from the Supreme Court, the nodules were discovered during tests performed when the justice fell and fractured her ribs on Nov. 7. "According to the thoracic surgeon, Valerie W. Rusch, MD, FACS, both nodules removed during surgery were found to be malignant on initial pathology evaluation," the statement says. "Post-surgery, there was no evidence of any remaining disease. Scans performed before surgery indicated no evidence of disease elsewhere in the body. Currently, no further treatment is planned. Justice Ginsburg is resting comfortably and is expected to remain in the hospital for a few days. Updates will be provided as they become available.”

According to NPR, when doctors took CT scans of Ginsberg’s ribs after her fall in November, doctors noticed an abnormality in one lobe of her lung. The results of testing and biopsies showed that there were two non-small cell cancerous lesions, says NPR, but they didn’t see any involvement with Ginsberg’s lymph nodes.

Ginsberg has also previously experienced colon and pancreatic cancer, according to NBC News. Dr. Raja Flores, Mount Sinai Health System's Chair of Thoracic Surgery, tells Bustle Ginberg's lung nodules could be related to her past cancers that have slowly spread to other parts of her body.

"What they're going to do is they're going to look under the microscope to look at the tissue," Dr. Flores tells Bustle. "If the tissue shows pancreas cells, then you know it came from the pancreas. If it shows cells that look like the colon, then it means it came from the colon. If the cells just have lung cells in it, then you know that it originated in the lung, and it's a lung cancer."

Ginsberg told CNN back in August she has no intention of stepping down any time soon. She said, "My senior colleague, Justice John Paul Stevens, he stepped down when he was 90, so think I have about at least five more years."

More like this
Here’s What Health Means To People In 2023
By Isabella Biedenharn
How Ovulation Affects Your Sense Of Smell, Libido, & More
By JR Thorpe and Lexi Inks
An Expert Weighs In On The Viral Raw Carrot Salad Trend
By Alexis Morillo
How Many Burpees Should You Do Per Day? Here’s What Fitness Trainers Say
By Carolyn Steber
Get Even More From Bustle — Sign Up For The Newsletter
From hair trends to relationship advice, our daily newsletter has everything you need to sound like a person who’s on TikTok, even if you aren’t.