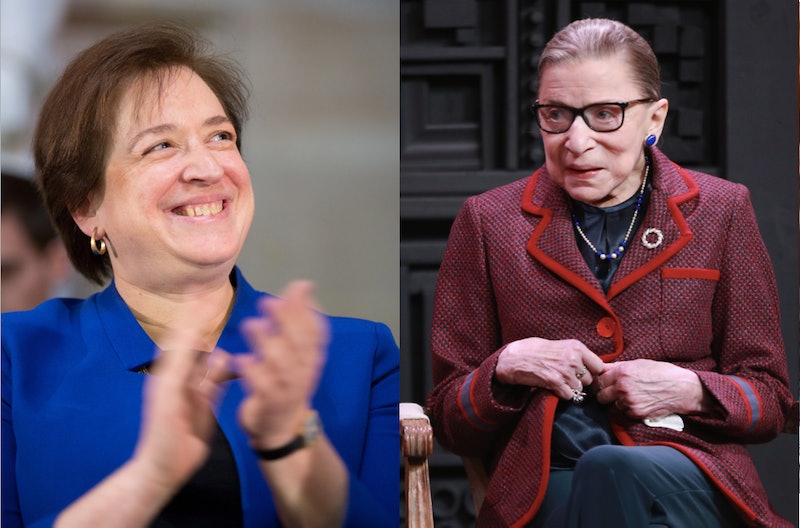 Given the magnitude and gravity of their legal work, it's understandable that some of us may think Supreme Court justices live absolutely different lives than other Americans. But WAMU's Martin Austermuhle reported on Thursday that Supreme Court Associate Justices Ruth Bader Ginsburg and Elena Kagan already voted in the midterm elections, just like the millions of people who cast their ballot before Nov. 6.

According to the WAMU report, Ginsburg was spotted at a voting site in Judiciary Square in Washington D.C. on Tuesday. Michael Clark, a campaign worker for mayoral candidate James Butler, told WAMU that he saw Ginsburg, who he said was friendly to onlookers. "I looked up and saw Ruth Bader Ginsburg," Clark said. "She was very nice. She waved."

Kagan, too, had been seen casting her vote for the midterm election. WAMU reported that Kagan voted early on Wednesday. Sharon Gang, who volunteered for D.C. council member Elissa Silverman, told WAMU, "It was very exciting. She wouldn’t stop to get literature, unfortunately." Clark also said he saw Kagan and that "she tried to slip in. She waved at people on the way out."

These Supreme Court justices vote like just about anybody else eligible to do so in America. Rachel Coll, a spokesperson for the Washington D.C. Board of Elections, told WAMU, "There's no special treatment." The justices may, however, have security detail around them for safety purposes. For instance, according to WAMU, Ginsburg was seen walking with two security officers in addition to an assistant.

There's also a possibility that they may be escorted to a polling station as Supreme Court Associate Justice Sonia Sotomayor was in 2012.

To see a Supreme Court justice vote early in a midterm election may have a positive impact on people who have yet to cast their ballot. If anything, it may simply show onlookers that these high-ranking and likely extremely busy members of the Supreme Court are normal human beings with their own opinions and interest in local politics. It may even push them to vote early in their own local elections.

In simple words, seeing people like Ginsburg and Kagan vote may just demystify the justices' collective image among Americans. It could also help people learn that Supreme Court justices are entitled to vote in elections like any citizen of the United States.

And it seems like catching sight of Kagan and Ginsburg voting early was well-received by Clark and Gang. Of Kagan, Gang said, "I was sort of inspired by it because she is voting early. She's making the effort to vote early. And in a local election. I thought that was really important."

Clark echoed Gang's sentiment, saying, "It was pretty exciting to see them taking part in the democratic process here in D.C."

While we may never know how they vote at the ballot box, we do know how Supreme Court justices vote on the bench. Each of the nine justices' vote carry significant weight, given their ability to shape this country's culture, laws, and values.

There is plenty of debate there on the bench, just as there is in politics today. But seeing Ginsburg and Kagan exercising their civic duty at the ballot box was likely a welcome sight for many — and may just serve as motivation for others.