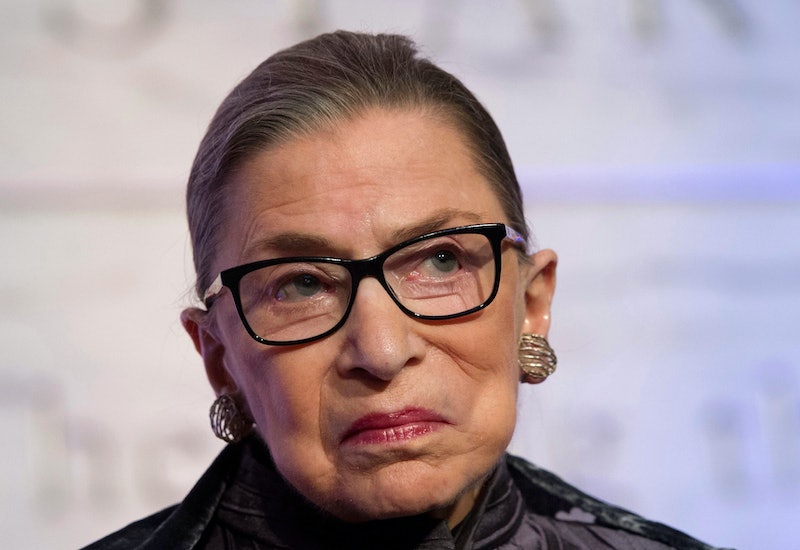 In American political rhetoric, supporting the Roe v. Wade Supreme Court decision that legalized abortion across the U.S. has become synonymous with supporting a woman's right to choose. But this isn't always the case — and beloved feminist Supreme Court justice Ruth Bader Ginsburg's opinion on Roe is the perfect proof of that.

According to the Washington Post, liberals doubted President Clinton's choice of Ginsburg for the Supreme Court in the 1990s because she had expressed her dislike of the decision. This doesn't exactly square with Ginsburg's reputation as a staunch defender of — and even crusader for — women's rights, at least until you read why she criticized it.

As religious and public life-focused journal First Things explained, Ginsburg's critique of Roe was based on the fact that she believed that the decision had pushed things too far forward too fast. By effectively legislating an immediate change rather than allow for multiple decisions to be built up in favor of reproductive rights by states and localities all over the country, in Ginsburg's mind Roe granted “opponents of access to abortion a target to aim at relentlessly.” In other words, Ginsburg believed that it was the right decision, but the wrong strategy.

“My criticism of Roe is that it seemed to have stopped the momentum on the side of change,” Ginsburg said at a talk at the University of Chicago law school in 2013. She offered another critique at that same talk as well, this time about who the ruling actually referred to.

“Roe isn’t really about the woman’s choice, is it?” the octogenarian justice said. “It’s about the doctor’s freedom to practice … it wasn’t woman-centered, it was physician-centered.”

While she isn't the biggest fan of the case that won the right to an abortion for all women in America, though, there's no question that Ginsburg cares deeply about preserving and expanding women's rights, both reproductive and otherwise. As one example of that, the Washington Post referred to her dissent in the Gonzalez v. Carhart case from 2007, in which the court decided that it was not unconstitutional to ban a certain type of late-term abortion.

“In candor, the Act, and the court’s defense of it," Ginsburg wrote in her dissent, "cannot be understood as anything other than an effort to chip away at a right declared again and again by this court — and with increasing comprehension of its centrality to women’s lives.”

“The court deprives women of the right to make an autonomous choice, even at the expense of their safety," Ginsburg also said about the case. "This way of thinking reflects ancient notions about women’s place in the family and under the Constitution — ideas that have long since been discredited.”

Ginsburg reaffirmed her commitment to reproductive rights in 2016, when the court issued a decision striking down a Texas law, HB2 regarding health and safety standards for abortion providers that forced numerous clinics to close across the state.

“It is beyond rational belief that H. B. 2 could genuinely protect the health of women, and certain that the law ‘would simply make it more difficult for them to obtain abortions,'” Ginsburg wrote in a concurring brief to the majority opinion. “When a State severely limits access to safe and legal procedures, women in desperate circumstances may resort to unlicensed rogue practitioners, faute de mieux, at great risk to their health and safety."

Her brief also included another statement that was strongly in support of both abortion rights and Roe:

So long as this Court adheres to Roe v. Wade and Planned Parenthood of Southeastern Pa. v. Casey, Targeted Regulation of Abortion Providers laws like H. B. 2 that ‘do little or nothing for health, but rather strew impediments to abortion,’ cannot survive judicial inspection.

So, it's fair to say that Ginsburg supports Roe, even if she doesn't love it as a legal decision. And, more importantly, her commitment to protecting women's rights across the board has never been in question.

More like this
'The Capture' Is Finally Back – & S2 Looks Tense AF
By Sophie McEvoy and El Hunt
The Lionesses Are Calling For Equal Access To Football In Schools
By Sophie McEvoy
Everything To Know About Beyoncé's 'Renaissance Act II'
By Marina Watts
42 Black Owned Fashion & Beauty Brands To Support Today & Always
By Mekita Rivas, Shea Simmons, Kui Mwai and Dominique Norman
Get Even More From Bustle — Sign Up For The Newsletter