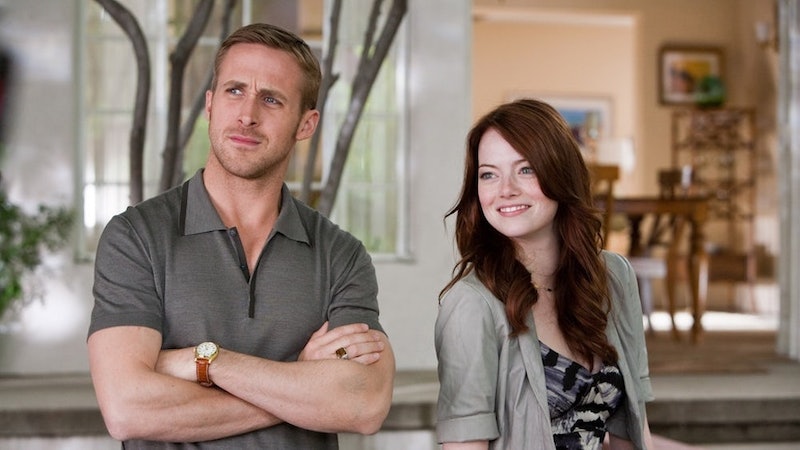 Everyone knows that no one puts Baby in a corner, but Johnny's moves apparently had a lasting effect on Ryan Gosling. It turns out, that Dirty Dancing lift in Crazy, Stupid, Love was inspired by Gosling's real life. Yes, according to the directors of that 2011 rom-com, Gosling once really did use that lift to pick up a woman — and not just literally.

In an interview with Entertainment Weekly, in honor of Valentine's Day, Crazy, Stupid, Love's co-directors Glenn Ficarra and John Requa shared some secrets from the movie. The biggest reveal being about the iconic Dirty Dancing move that Gosling's Cal pulls on Hannah, played by Emma Stone, in hopes of charming her. Yes, Cal considers Patrick Swayze the perfect aphrodisiac and funnily enough, so does Gosling.

When the actor first met with the movie's directors and writer Dan Fogelman he revealed that "he had done the Dirty Dancing lift in real life to a girl,” Requa said. “Me and Glenn turned to each other and said, ‘Ok, that’s going in the movie!” He’s like, ‘No you can’t put that in the movie.’ We put it in, much to his chagrin.”

While initially Gosling might not have been thrilled to see his IRL seduction move revealed on the big screen, he seemed happy to talk about the filming of that scene. Or, even to reenact it since he ended up lifting Al Roker on The Today Show in 2011.

When talking to EW, Ficarra admitted that shooting the scene, in which Gosling did his own stunts, was "harder than it looks, and it’s scary. Ryan really worked hard. He’s a trained dancer, so he was concentrating on making Emma feel safe.”

Apparently, that was no easy task since Stone revealed last year that she had a "meltdown" when filming the scene. “When we do Crazy, Stupid, Love, I know that we’re gonna do the Dirty Dancing lift," she said on The Graham Norton Show. "I don’t know, however, that I have an internalized phobia of being lifted over someone’s head at the height of about 6 feet." This, she revealed, is due to the fact that when she was a kid her gymnastics coach accidentally dropped her, leaving her with two broken arms.

In that same interview with British comedian Norton, Gosling revealed that her reaction to the lift was almost animalistic, explaining, "imagine if a possum fell out of a tree and tried to scratch your eyes out, it would be something similar." In the end, Stone admitted she ended up using a body double for that scene, but not before watching the 1986 movie Labyrinth to calm herself down.

In the end, that might have been the moment that Stone realized she had a real partner in Gosling. "I can’t even imagine what my life would be without Ryan," Stone said while at last year's Telluride Film Festival. "He’s so special. It makes me emotional. He’s so talented but he’s such a great person to work with because he’s so collaborative and excited about the process. He’s taught me a lot about being really generous." The two have appeared in two other movies together since Crazy, Stupid, Love — 2013's Gangster Squad and 2016's La La Land — and Stone seems more than happy to give it another go anytime.

Whether this Dirty Dancing move ever worked on Gosling's date in real life, we'll never know. It clearly had an affect on Stone, though, and for that we'll continue having the time of our lives watching their films.