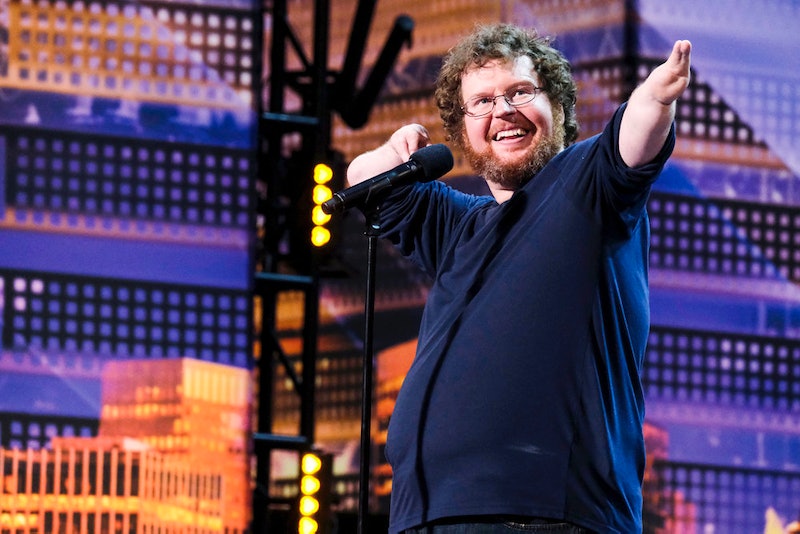 Instead of allowing his disability to inhibit him, Ryan Niemiller from America's Got Talent capitalized on it. The comedian — who, according to his website, was born with a disability in both arms — calls himself the "Cripple Threat of Comedy" and uses his stand-up to share his unique perspective in hilarious ways. He tours the country year-round "covering topics such as dating, trying to find employment, and attempting to find acceptance in a world not designed for him," his website reads. He's spreading crucial awareness for people with disabilities — but he's also making a lot of people laugh.

Much of Niemiller's material recounts actual experiences he's had while navigating life with his disability — and how others tend to react to it. The bits are funny, but they also bring awareness to how people with disabilities should and shouldn't be treated. In a comedy world that has long been dominated by non-disabled people, Niemiller is providing much-needed representation and perspective.

His YouTube channel, although thin in inventory, features a few of his acts ranging from 2014 to 2018, and upon clicking play on any of them, his tone and purpose are clear. In his most recent upload, a set from December, he tells the story of the time a new job required him to document his fingerprints as part of a background check.

Due to his disability, Niemiller doesn't have all five fingers on either hand, which, he said, sent the fingerprint specialist at the police station into a panic. "I should've called ahead," he told the crowd. He went on to explain how he followed a woman to the backroom to take his prints, and upon taking one of his fingers, she asked, "So, which one is that?" Fingerprint cards are usually separated by index, middle, ring, pinky and thumb boxes. "I don't know," he told the woman. "I was hoping you could tell me."

Niemiller said the woman then enlisted a more experienced employee who completed the job, and he left the station with a picture of his print card. "It looks like the saddest bingo card there ever was," he joked. Everyone laughed.

America's Got Talent hasn't provided much preview of his run on the show yet, but he's likely to do well, considering the success of past comedians with similarly unique takes like Season 10 runner-up Drew Lynch, who developed a vocal stutter after a baseball accident.

While Niemiller and the rest of the viewers anticipate his AGT journey, he's keeping everyone entertained and up-to-date on social media by live tweeting the show and frequently sharing his hashtag #ClubNubb. He's even showing lots of love for his fellow contestants by rooting them on, and was particularly thrilled to see viral musician Kodi Lee receive Gabrielle Union's golden buzzer. "I'm so proud of @Kodileerocks," Niemiller tweeted. "As someone who has a disability, representation matters, and you represented so damn hard. Thank you."

As the competition heats up, hopefully they'll get the chance to share the stage.