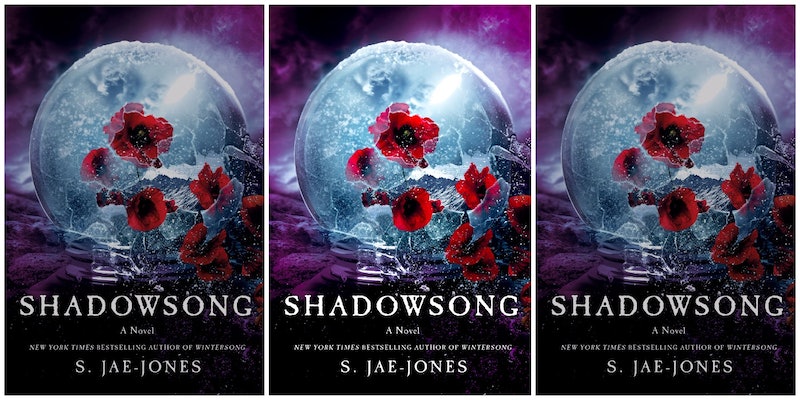 If you — like me! — fell absolutely head-over-heels for the world of the Goblin King in Wintersong, you're in luck: author S. Jae-Jones is returning to the Underground in the sequel, Shadowsong. Bustle is proud to reveal the cover and an exclusive excerpt from Shadowsong, coming next year from Wednesday Books.

It's been six months since Liesl left the Goblin King and returned to the world above. Now that she's back, she's determined to further her brother's music career — and her own. But there's something wrong with Josef; he's cold, distant, and withdrawn. And to make matters worse, Liesl hasn't been able to forget the Goblin King... or the music he inspired.

But then, troubling signs begin to indicate that the barrier between her world and the Underground is crumbling. So Liesl is forced to return the Underground to figure out what is happening — and what is the truth of the Goblin King.

You'll have to wait until January 30, 2018 to find out what's next for Liesl, Josef, and the Goblin King. But don't worry — Bustle has an exclusive peek at the cover, plus an excerpt from the novel. See it all below!

They say it rained on the day Mozart died.

God must see fit to cry on the days of musician’s funerals, for it was pissing buckets when we laid Papa to rest in the church cemetery. The priest said his prayers over our father’s body with uncharacteristic swiftness, eager to get away from the wet and the muck and the sludge. The only other mourners aside from family were Papa’s associates from the tavern, there and gone when they realized no wake was to be held.

Where were you, mein Brüderchen? Where are you?

Our father left us quite a legacy, Sepp — of music, yes, but mostly of debt. Mother and I have been over our accounts again and again, trying to reconcile what we owe and what we can earn. We struggle to keep from drowning, to keep our heads above water while the inn slowly drags us down to oblivion. Our margins are tight, our purses even tighter.

At least we managed to scrape together enough to bury Papa in a proper plot on church grounds. At least Papa’s bones would be laid to rest alongside his forefathers, instead of being consigned to a pauper’s grave outside town. At least, at least, at least.

I wish you had been there, Sepp. You should have been there.

Six months gone and no word from you. Do my letters reach you just one stop, one city, one day after you leave for your next performance on tour? Is that why you haven’t replied? Do you know that Papa is dead? That Käthe has broken off her engagement to Hans? That Constanze grows stranger and more eccentric by the day, that Mother — stoic, steadfast, unsentimental Mother — weeps when she thinks we cannot see? Or is your silence to punish me, for the months I spent unreachable and Underground?

My love, I am sorry. If I could write a thousand songs, a thousand words, I would tell you in each and every one how sorry I am that I broke my promise to you. We promised that distance wouldn’t make a difference to us. We promised we would write each other letters. We promised we would share our music with each other in paper, in ink, and in blood. I broke those promises. I can only hope you will forgive me. I have so much to share, Sepp. So much I want you to hear.

Your ever loving sister,

Another death, another funeral, another wake. Frau Berchtold was found dead in her bed last week with frost about her lips and a silvery scar across her throat. Do you remember Frau Berchtold, Sepp? She used to scold us for corrupting the good, God-fearing children of the village with our terrifying tales of the Underground.

And now she is gone.

She was the third this month to pass in such a manner. We all grow fearful of the plague, but if it is plague, then it is like no pestilence we have ever known before. No pox, no bruises, no sign of the disease, none that we can see. The dead appear unharmed, untouched, save for the silver kisses about their mouth and neck. There is no rhyme or reason to their passing; they are old and young, male and female, healthy and infirm, sound and unsound altogether.

Is this why you do not write? Are you healthy, hale, whole? Are you even alive? Or will the next letter with your name upon it contain nothing but heartbreak and another funeral to arrange?

The elders of the town mutter dire portents under their breaths. Elf-struck, they say. Goblin-marked. The devil’s handiwork. Mark our words: we are headed for trouble soon.

Goblin-marked. Silver on the throat. Frost on the lips. I do not know what this betokens. I once believed that love was enough to keep the world turning. Enough to overcome the old laws. But I have witnessed the slow unraveling of reason and order in our boring, backwards little village, the rejection of enlightened thought and a return to forgotten ways. Salt on every threshold, every entrance. Even the old rector has warded the steps of our church against evil, unbroken white lines that nevertheless blur the boundaries between what is sacred and what is superstition.

Constanze is no help. She isn’t much for conversation these days, not that our grandmother ever was. But in truth, she worries me. Constanze emerges from her quarters but seldom nowadays, and when she does, we are never certain which version of our grandmother we will meet. Sometimes she is present, sharp-eyed and as irascible as ever, but at others, she seems to be living in another year, another era altogether.

Käthe and I dutifully leave her a tray of food on the landing outside her room every evening, but every morning it remains untouched. A few bites may be taken of the bread and cheese, drops of milk scattered on the floor like fairy footsteps, but Constanze seems to take no sustenance beyond fear and her faith in Der Erlkönig.

Belief is not enough to live on.

There is madness in her bloodline, Mother would say. Mania and melancholy.

Sometimes, I fear there is a maelstrom swirling within me. A vortex, spinning around a truth I do not want to admit. I do not sleep, for I fear the signs and wonders I see when I wake. Thorny vines wound round twigs, the clack of invisible black claws, blood blooming into the petals of a flower.

I wish you were here. You always could straighten my wandering, rambling thoughts and prune my wild imaginings into a beautiful garden. There is a shadow on my soul, Sepperl. It is not just the dead who are goblin-marked.

Help me, Sepp. Help me make sense of myself.

The seasons turn, and still no word from you. Winter is gone, but the thaw is slow to come. The trees shiver in the wind, their branches still bare of any new growth. The air no longer smells of ice and slumber, but neither does the breeze bring with it any scent of damp and green.

I have not stepped foot in the Goblin Grove since summer and the klavier in your room has lain untouched since Papa died, the yellowed ivory and faded black keys unplayed.

I don’t know what to tell you, mein Brüderchen. I have broken my promises to you twice over. The first by being unreachable, the second by failing to write. Not words, but melodies. Harmonies. Chords. The Wedding Night Sonata is unfinished, the last movement still unwritten. When the sun is high and the world is bright, I can find a myriad excuses for not composing in dusty corners, in accounting ledgers, in stores of flour, yeast, sugar, and butter, in the quotidian minutiae of running an inn.

But the answer is different in the dark. Between dusk and dawn, the hours when kobolds and Hödekin make mischief in the woods, there is only one reason.

I have not been honest with you, Sepp. I have not told you the whole story, thinking I would do so in person. This is not a story I thought I could commit to words, for words are insufficient. But I shall try anyway.

Once there was a little girl, who played her music for a little boy in the wood. She was an innkeeper’s daughter and he was the Lord of Mischief, but neither were wholly what they seemed, for nothing is as simple as a fairy tale.

For the span of one year, I was the Goblin King’s bride.

That is not a fairy tale, mein Brüderchen, but the unvarnished truth. Two winters ago, Der Erlkönig stole our sister away, and I journeyed Underground to find her.

I found myself instead.

Käthe knows. Käthe knows better than anyone just what it was like to be buried in the realm of the goblins. But our sister doesn’t understand what you would: that I wasn’t trapped in a prison of Der Erlkönig’s making, but became Goblin Queen of my own free will. She does not know that the monster who abducted her is the monster I claim. She thought I escaped the Goblin King’s clutches. She does not know he let me go.

In all our years of sitting at Constanze’s feet and listening to her stories, not once did she ever tell us what came after the goblins took you away. Not once did she ever say that the Underground and the world above are as close and as far as the other side of the mirror, each reflecting the other. A life for life. How a maiden must die in order to bring the land back from death. From winter to spring. She never told us.

But what our grandmother should have told us was that it isn’t life that keeps the world turning; it is love. I hold onto this love, for it is the promise that let me walk away from the Underground. From him. The Goblin King.

I do not know how the story ends.

Oh, Sepp. It is hard, so much harder than I thought to face each day as I am, alone and entire. I have not stepped in the Goblin Grove in an age because I cannot face my loneliness and remorse, because I refuse to condemn myself to a half-life of longing and regret. Any mention, any remembrance of those hours spent Underground with him, with my Goblin King, is agony. How can I go on when I am haunted by ghosts? I feel him, Sepp. I feel the Goblin King when I play, when I work on the Wedding Night Sonata. The touch of his hand upon my hair. The press of his lips against my cheek. The sound of his voice, whispering my name.

There is madness in our bloodline.

When I first sent you the pages from the Wedding Night Sonata, I thought you would read the through-line in the music and resolve the ideas. But I must own my own faults. I walked away, so it is up to me to write the end. Alone.

I want away. I want escape. I want a life lived to the fullest—filled with strawberries and chocolate torte and music. And acclaim. Acceptance. I cannot find that here.

So I look to you, Sepp. Only you would understand. I pray you will understand. Do not leave me to face this darkness alone.

Yours in music and madness,

Master Antonius is dead. I am in Vienna. Come quickly.