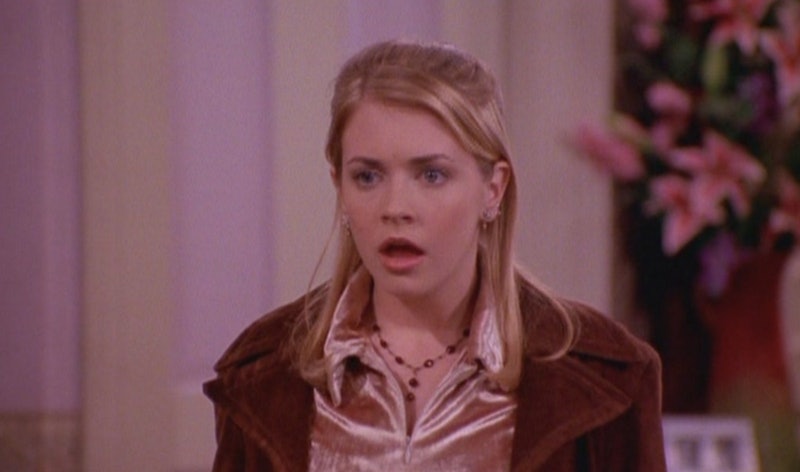 Remember how, way back in 2016, Melissa Joan Hart dropped some hints that a reboot of one of her most iconic shows wasn't out of the question? Well, now the news that Archie comic character Sabrina the teenage witch is likely to be on Riverdale suggests to me that this could be what Hart was talking about. Riverdale executive producer Roberto Aguirre-Sacasa told Entertainment Weekly:

Some people don’t even know that Sabrina is in the Archie family. There is absolutely a universe where Sabrina pops up in Riverdale or one town over in Greendale. Certainly, the priority is launching Riverdale and making sure that show is as good as it can be and as embraced as we want it to be. I’ll just tease that Sabrina has potential with a capital P.

And this follows just a matter of months after Hart, who played Sabrina in the TV adaptation in the '90s, dropping hints that perhaps a reboot wasn't out of the question. In late September, Hart told Entertainment Tonight:

There's a lot of talk about a Sabrina reboot. I feel like almost every day, somebody's calling me about it. 'Would we do it? Should we do it? How do we do it? ‌

If Hart argues that it feels like someone calls her about it "almost every day," presumably that's a lot of phone calls related to a reboot. Just a theory, but isn't this the ideal TV show to use to test the waters for enthusiasm for a reboot? The network airing Riverdale, the CW, wouldn't have to commit to a full series; this way they could gauge audience response to a new Sabrina based on a few different episodes.

This isn't all speculation on my part, though. According to io9, in January Riverdale showrunner Roberto Aguirre-Sacasa stressed at a panel that, while nothing was confirmed yet, they had hopes for a Sabrina The Teenage Witch reboot. Only this version would be more "like Rosemary’s Baby," possibly filmed in Salem itself.

Since the reboot would incorporate both Greendale and Riverdale, presumably Riverdale would be the perfect place to test the character in, especially since Riverdale's tonality sounds similar to the above:

The live-action series offers a bold, subversive take on Archie, Betty, Veronica, and their friends, exploring small-town life and the darkness and weirdness bubbling beneath Riverdale’s wholesome facade.

This said, it isn't exactly a flaw-free plan if you're a long time fan of Hart's show. For me, the whole point of the original TV adaptation of Sabrina The Teenage Witch was the contrast between the dark power magic could wreak and the wholesome vibes of the characters and the fictional town of Westbridge, Massachusetts. It's hard to imagine how the Sabrina we knew would fit into this new, darker take on the Archie comics universe. Presumably, she'd be a totally different character from the one we once knew.

Still, snaps to the Riverdale team for not just resting on their laurels. In an age of endless reboots, less nostalgia and more innovation sounds like a good thing. So no, a Sabrina The Teenage Witch reboot isn't written in stone. But, if we get it, old and new fans alike are likely — even after initial reluctance — to get hooked.