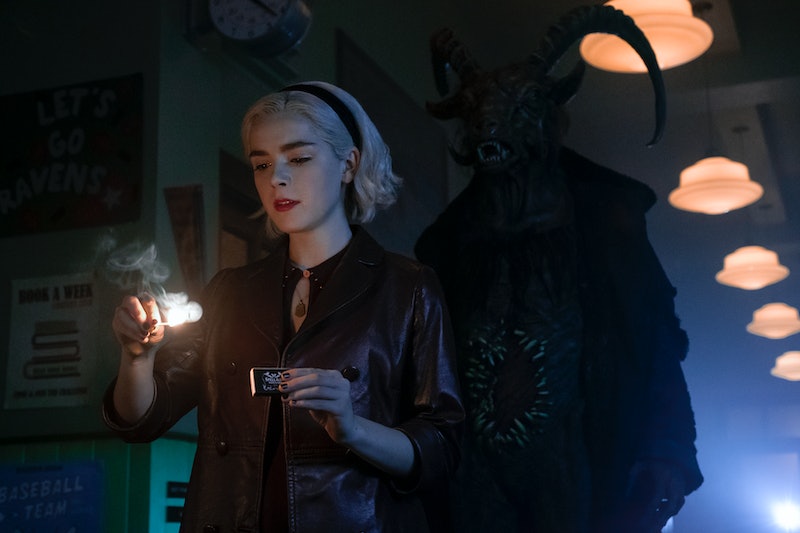 If you're Sabrina Spellman, committing to the Dark Lord is cause for a makeover. Sabrina's new look on Chilling Adventures of Sabrina Part 2 is edgier, complete with platinum blonde hair, darker makeup, and more mature clothing. But the young half-witch, half-mortal isn't just trying out a new look — series star Kiernan Shipka promises that Sabrina's physical changes are directly tied to her emotional and mental transformation now that she's signed her name in the Book of the Beast.

As fans saw in the game-changing Chilling Adventures of Sabrina Part 1 finale, Sabrina finally gave in to her witch side. But when speaking to Bustle along with a group of reporters on the Vancouver-based set last fall, Shipka reveals that Sabrina is leaning into the changes with enthusiasm. While Sabrina isn't going to look like a completely new person, Shipka loves how Sabrina is experimenting more with her style this season because of what it means for the character.

"She's not trying to be anything," Shipka says. "She knows so well who she is. I think that it's her expressing her true self in a lot of ways." So does that mean Sabrina is finally ready to hail Satan? "I do think there's that dark side in her," Shipka concedes. "I think she's really excited about it right now. She's pumped on it."

In the Part 1 finale, Sabrina was manipulated into signing her name in the Book of the Beast and committing to her witch heritage, forgoing her mortal life and friends. But Shipka promises that Sabrina was more in control of that move than fans might believe.

"It definitely wasn't surrendering, by any means," Shipka adds. "If anything, I think it was taking a step forward in her agenda. It was just what needed to be done. Sabrina definitely doesn't agree with the antics of the Church of Night and fights strongly to change that. That's pretty much always on her mind."

While Part 1 saw Sabrina fighting for equality, inclusion, and intersectional feminism at her mortal school, Part 2 finds the young activist fighting against the patriarchy of the Church of Night in her own subversive style. And she'll actually have some allies in those who were her enemies before, like the Weird Sisters.

When Part 2 begins, a lot has been shaken up in Sabrina's life. Not only do all her human friends know the truth about her witch side, but she's fresh off her breakup with Harvey, her first love.

"To a certain extent, there's that love that's always going to be there," Shipka says of Sabrina and Harvey's relationship. "She is torn up. I do think that she is a little broken. But I think that Sabrina's a fixer. She likes to fix things. She doesn't want the relationship to be awkward. I don't think we're going to see them as enemies, but we're going to see a very different Harvey and Sabrina in the second season, just because both of them have grown so much and lost people and gained things."

As for what Sabrina has gained, expect to see her grow even closer to Nicolas Scratch this season.

"Obviously Sabrina has this love for Harvey that will never go away but, at the same time, she's a young girl and she wants to have fun and Nick is hot and awesome and she loves him in many ways," Shipka says. "They're really fun partners in crime in the second season. Sabrina needs a warlock in the second season to help her get done a lot of the things that she needs to get done."

While Shipka won't spoil anything, she does reveal that Sabrina enlists some help this season in furthering her agenda within the Church of Night. "Her support system is largely coming from the witch side in the second season," Shipka adds. "I think Nick is one of the few warlocks that believes in her and that has her back and that doesn't look down on her and think less of her."

Could that support bloom into something more? Find out by streaming The Chilling Adventures of Sabrina Season 2 on Netflix when it drops Friday, April 5.

More like this
Nicola Coughlan Shared A Lady Whistledown Excerpt From ‘Bridgerton’ Season 3
By Grace Wehniainen, Alyssa Lapid and Sam Ramsden
The New Bachelor Will Be Announced Next Week & Here Are The Top Contenders
By Grace Wehniainen
The 'Bachelor In Paradise' Schedule Shifts To 4 Hours Every Week After The Season 8 Premiere
By Brad Witter
A New 'And Just Like That' Table Read Pic Confirms A Key Character's Return
By Jack Irvin and Grace Wehniainen
Get Even More From Bustle — Sign Up For The Newsletter