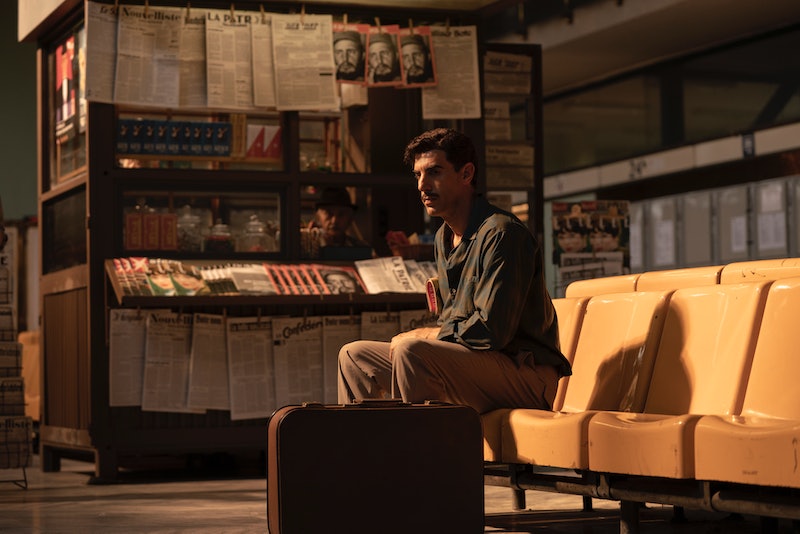 It's nothing new to see Sacha Baron Cohen give a performance that could be called transformative. His latest television series — Showtime's Who Is America — was built on making himself unrecognisable, but the actor's latest role in the Netflix mini-series The Spy is transformative in a much different way. The Spy sees Sacha Baron Cohen plays Eli Cohen in Netflix's The Spy, an Israeli spy that socialized his way into the sphere of influences of Syria's most powerful figures, including Syrian Prime Minister Amin al-Hafez, according to the Jewish Virtual Library.

While the story is exciting in its own right, the show's creator, Gideon Raff, tells Forbes that he took extra care when crafting the show's depiction of Cohen, who is seen as a hero by many, including him. "I've had books about Eli Cohen on my bookshelf ever since I can remember," Raff reveals, "There was always something really interesting about the story because it’s an extremely personal story of sacrifice and patriotism and yet, it always felt like it was bigger than the personal story." Raff says his research involved going to the sources that were closest to Cohen in his life, such as his still-surviving wife and children. "I met with them and I read a lot about it and I met with people that worked at the Mossad."

While Raff went to sources that were physically close to Eli Cohen during his lifetime — which was cut short when he was found guilty of espionage and executed by the Syrian government on May 18, 1965 —the story of Eli Cohen is well-known amongst people with a passionate interest in Israel military history, shared by sources like the Jewish Virtual Library and My Jewish Learning which feature detailed biographies of the spy.

Perhaps Cohen's greatest success is having played a major role in helping Israel acquire land under Syrian rule during the Six-Day War in 1967 — two years after his execution. Cohen had been collecting information under the guise of Argentina-based Syrian immigrant Kamal Amin Ta’abet, a man who just so happened to love hosting important political and business figures at his apartment, according to GQ Australia. During his time undercover, Cohen was able to visit the heavily restricted area known as the Golan Heights — a crucial part of Syria's larger defense strategy. Feigning compassion for the Syrian soldiers' lack of shade, he "gifted" the army eucalyptus trees to plant by their underground bunkers. That way, the Israeli forces knew where to aim, just like in the Netflix series.

These victories came at the cost of Cohen's life, whose public execution has not been forgotten over half a century later. According to Egypt Today, the quest to have Cohen's body brought from Syria to Israel for proper burial has gone on for decades, to no avail. While Cohen's life may be long over, his military achievements and espionage efforts have created a legacy unto themselves, and the international Netflix premiere of The Spy could go down as the most-witnessed celebration of Cohen's legacy ever created.