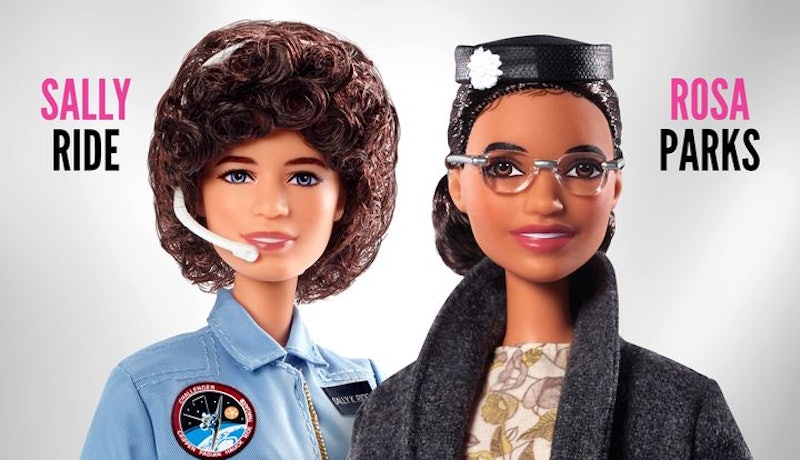 By amplifying important women from history as ideal role models, the toy company Mattel is trying to be more inspirational and educational. And this effort comes with some pretty cool figures from history. As part of Barbie’s Inspiring Women Series, feminist icons Rosa Parks and Sally Ride will be getting their own Barbie dolls.

Rosa Parks was an honored civil rights activist, who famously refused to give up her seat on a bus for a white man, sparking history-changing boycotts throughout the Jim Crow South. Sally Ride was the first woman and youngest American to travel to space on the Challenger Shuttle on June 18, 1983. Lisa McKnight, senior vice president and global head of Barbie, told HuffPost that “Both Sally Ride and Rosa Parks are changemakers, so these dolls celebrate their achievements, while also encouraging girls to challenge the status quo.”

The dolls will come with educational information, so that children can learn about these amazing stories and more. Both dolls are available for pre-order starting Aug. 26. The dolls cost around $30, while other Barbie dolls are about $20. Barbie is also spending this month honoring modern women role models, like actor Yara Shahidi, tennis champion Naomi Osaka, and visual artist Chen Man, as part of their Dream Gap Project Fund, a campaign to donate $1 for every Barbie sold during Barbie's 60th anniversary celebration to organizations supporting gender equity.

“As a brand that is dedicated to inspiring the limitless potential in every girl, Barbie is shining a spotlight on role models, historical and modern, to show them they can be anything," McKnight told HuffPost.

Ride isn't the only space and aeronautics pioneer in this collection. The Inspiring Woman collection also features Katherine Johnson, a NASA mathematician whose calculations led to the first U.S. space flights. She celebrates her 101th birthday on Aug. 26.

Another doll in the Inspiring Women Collection is modeled after Frida Kahlo, a Mexican artist and revolutionary. However, there was much controversy when Mattel first announced their plans to release a Frida Kahlo doll in 2018. In The Washington Post, Aditi Natasha Kini wrote that “Mattel’s version of Kahlo sanitizes her body and her history into an easily digestible, able-bodied, pretty sameness. This is Frida the celebrity, but it’s certainly not Frida the artist.” Relatives of Kahlo also attempted to stop the sale of these dolls in Mexico, arguing that Mattel didn’t have the right to use Kahlo's image. "The Frida Kahlo Corporation actively participated in the process of designing the doll, Mattel has its permission and a legal contract that grants it the rights to make a doll of the great Frida Kahlo,” a Mattel statement said, The Guardian reported.

In the past, Mattel has been criticized for making dolls that do not realistically portray women's bodies, and for lack of racial, ethnic, LGBTQ, and ability diversity. Campaigns like the Inspiring Women Collection and the Dream Gap Project are part of the company's efforts to diversify the dolls it sells. Mattel has also introduced Barbie dolls who use wheelchairs or with prosthetic limbs. In the end, it's important that kids are exposed to diverse dolls. But it's also important that they're exposed to extraordinary role models, especially ones that look like them. This new generation of Barbies making major steps in that direction.

More like this
24 History-Making Black Women You Probably Didn't Learn About In School
By Ayana Lage and JR Thorpe
15 Black-Owned Liquor & Wine Brands To Add To Your Bar Cart
By Alexis Morillo
6 Organizations Fighting Police Brutality That You Can Support Right Now
By Syeda Khaula Saad and JR Thorpe
These Artists Are Reimagining Black History Month To Create A Better Future
By Katie Mitchell
Get Even More From Bustle — Sign Up For The Newsletter
From hair trends to relationship advice, our daily newsletter has everything you need to sound like a person who’s on TikTok, even if you aren’t.