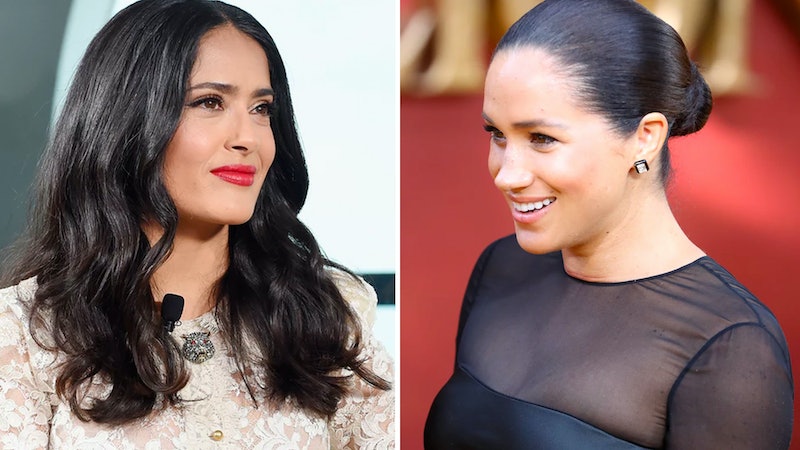 As part of Meghan Markle's British Vogue issue, the Duchess chose 15 women who she feels are "Forces for Change". One of these forces was Salma Hayek, who supports and champions women through being involved in numerous organisations and charities. In a recent article from CNN, readers learnt that Meghan phoned Salma Hayek about the British Vogue issue, and how she wanted the actor to be a part of it.

Hayek spoke of how she first talked to British Vogue editor Edward Enninful before speaking with Meghan. "I was in the car and he said, 'Listen, I'm going to put somebody on the phone. Are you in the car with people?' I said 'Yes.' He told me 'you cannot say the name of the person I'm calling.' Frankly, I thought it was a joke," the actor said. Before Meghan introduced herself, Hayek thought Enninful was going to pass her to Naomi Campbell.

"I thought they were pulling my leg or something, you know?" she continued. "I said, 'Oh, she's in London and he's gonna pass me to her.' But then it took a while for the other person to get on the phone. Then she got on the phone and introduced herself."

After Meghan began describing the premise for her Vogue issue and that it was a "project in support of women," Hayek thought that she was being asked to give advice or to asking if she wanted to team "up for a specific organisation she had in mind," CNN notes.

Hayek is involved in several charities and organisations supporting women, including the Kering Foundation and Chime For Change. She also began sponsoring an orphanage in Mexico in 2016 and is an advocate for refugees as People reports.

It wasn't until the Duchess actually revealed to Hayek that she was putting her favourite women on the cover of her issue and that she was one of them that it began to sink in. "I was like completely shocked. I did not see it coming that way. She started talking about how she's been watching me and why me," Hayek explained.

Out of the 15 women chosen for the cover, it turns out that Hayek was the only one who knew about it before the photo shoot. I mean, talk about keeping a big secret. "I felt very honoured when we did this photo shoot. No one else knew what it was for. Only me and the photographer, Peter Lindbergh, knew," the actor explained.

"And all the girls were getting their picture taken for the cover and they didn't know that Meghan was how they got there."

As cliched as it sounds, Meghan and Hayek's collaboration on this project sounds like the start of a beautiful friendship. When asked whether the Vogue issue could mean that she and Meghan would collaborate in the future, Hayek didn't rule it out. "Maybe. Maybe it's not something you're gonna see," she said, before continuing:

"I think we had a connection before we even talked to each other. The shock is that this person had been watching me and I had no idea. It's really beautiful and I really do think we have a special connection."