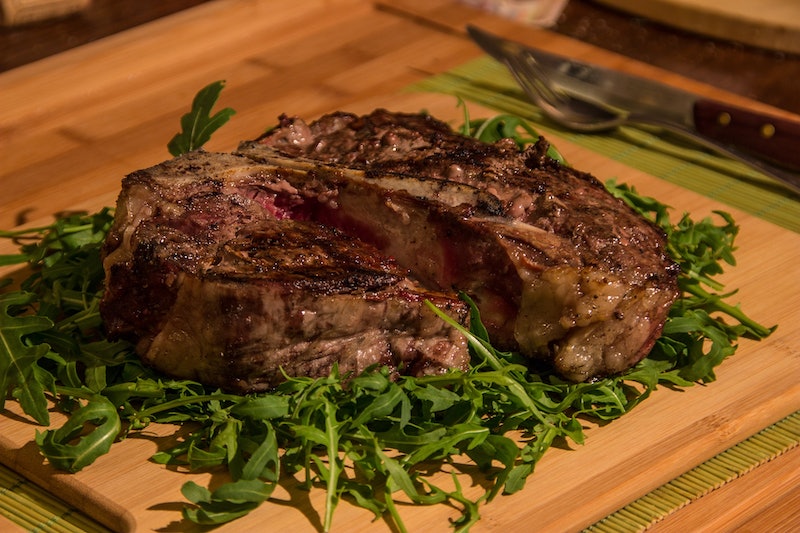 Turkish chef and butcher Nusret Gökçe captured the world’s attention with his sensual treatment of steak and meme-worthy flare for finishing dishes with a cascade of salt. Now the social media meat mogul, better known as "Salt Bae," is opening two new restaurants. Gökçe plans to bring his unique salt stylings to New York and London, Turkish media outlet Hürriyet Daily News reports, giving the multitudinous followers of his Instagram videos a chance to taste the real thing — and perhaps even meet the savory chef himself, round sunglasses, goatee, and all. (Commence freak out in five, four, three ...)

Salt Bae rose to viral fame on Jan. 7 this year when a 36-second long Instagram video of Gökçe slicing a sizable Ottoman steak and showering it with glittering salt crystals (his signature move) was discovered by the internet at large. Within 24 hours, clips of the now infamous video had circulated across social media, alongside the snappy hashtag "#saltbae." Within 48 hours the original video racked up over 2.4 million views and thousands of adoring comments. Two weeks since its original posting, the video has over 8.6 million views and 43,000 comments, turning Salt Bae into a social media phenomenon and the first official meme of 2017.

Along with the proliferation of Gökçe's videos spreading across Twitter, a still of Gökçe sprinkling salt soon became the meme equivalent of a mic drop, or signifying someone being “extra” or “the most.” The meme came about naturally, without any help from a PR company or social media marketing wiz. In the recent interview, Gökçe added that all the videos and photos that endeared him to the Internet were simply captured by the waiters at his restaurants.

Gökçe is co-partner in a chain of steakhouses called Nusr-et. He opened the flagship location in 2010, well before his brush with viral fame, and quickly expanded the brand, which currently has five locations across his native Turkey, plus one in Dubai. In an interview with Hürriyet Daily News, however, Gökçe revealed his plans to take his meat empire stateside in the next few months; indeed, he has pledged to become the “world’s greatest butcher.” While no exact locations, detailed plans, or a timeline have been announced for Gökçe's new steakhouses, you can bet that people will be lining up around the block to see his blessed salting when the time finally comes.

His seasoning trick, which has been featured on t-shirts, graffiti portraits, and mimicked lovingly on Twitter more than one can count, seems to have been born naturally. “Actually, that move at the end [salting] came automatically. I did not do that to show off," Gökçe told Hürriyet Daily News. "It is just my signature. You can think of it a kind of final touch for a painting. It was a final touch to the meat; I was blessing the meat."

Though Gökçe only speaks Turkish, he also suggests that he “could communicate with people through meat.” Which, I believe, is exactly what his carnivorous fans desire.