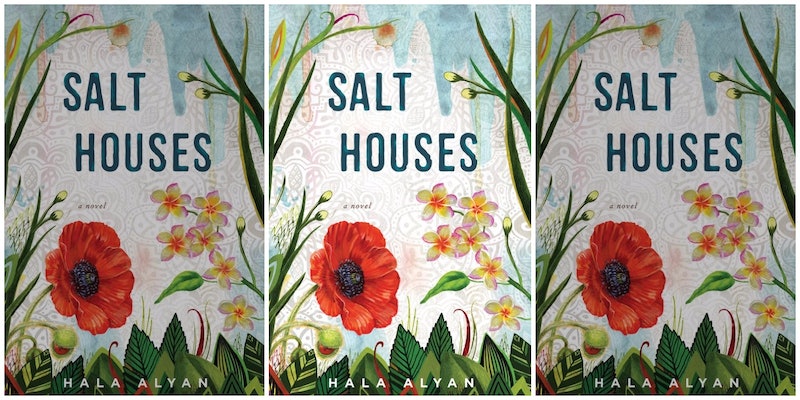 In Hala Alyan's debut novel, Salt Houses, the Yacoub family has a unique definition of home. Readers follow the family over six generations, from 1963 to 2014, as violence drives them from Palestine and forces them build (and rebuild) their lives in different parts of the world. Each chapter jumps forward in time and shifts point-of-view, and because of this unique structure, the book reads like a collection of short stories, each about a different member of the family.

"Really in the end, what I was doing was telling the story of one big character — which is the family," Hala Alyan tells Bustle.

The novel begins in 1963, in Nablus, Palestine, as an Arab woman named Salma reflects on her children — Widad, Alia, and Mustafa — on the night of Alia's wedding. In the next chapter, Mustafa struggles to balance his personal desires and a rising need for action against Israeli forces in 1965. This chapter is actually where the novel began for Alyan. She initially wrote it as a short story.

"I was curious about what it would be like to be a young man in that moment, living in what is now the West Bank," Alyan says. "And I kind of just fell in love with his sister and his mother... I sort of felt like I knew something they didn't know, which is that they were going to lose their house in a few years, and they were going to have to leave in a few years, and just felt very compelled to follow that line. I wanted to know what came before, how they got to that, and I wanted know what happened afterward."

Mustafa's sister, Alia, became a focal point of the novel. The following chapters are written from her point-of-view, as well as the points-of-view her husband, their children, and their grandchildren. Alia is a feisty — often surly — character, who is determined to get her way at all costs. Even when she is complaining or arguing, she has an intensity in the way she cares about her family.

Alyan says she loved writing from Alia's perspective, and particularly loved writing about her chaotic relationship with her youngest daughter, Souad. "They're just these really difficult women, and I have a thing for difficult women," Alyan says. "There's something very compelling about them and the stories that they often times have but don't get to tell. And I love the idea that I got to track them throughout their lives. It felt very much like a privilege."

Each of Alia and Atef's children forge their own path over the course of the novel. Their oldest daughter, Riham, stays near her parents in Jordan, where she discovers a deep connection to Islam, gets married at a young age to an older widower, and becomes a stepmother. Souad, studying in Paris at the time of the Kuwait invasion, impulsively marries her then-boyfriend and stays abroad. She and her brother, Kiram, both move to Boston, have children, and ultimately move their families to Beirut.

Another of Alyan's favorite characters to write was Linah, Kiram's daughter. She is 11 years old, and living in Beirut during the 2006 Lebanon War. Alyan was actually in Lebanon during this war, too, at the age of 19. "I had to really ask myself — take all the details that you remember, and now imagine that you were 10 years younger," she says. "What would be the things that would stand out to you? What would be things you'd be paying attention to? I love that idea of how boring it had been for the younger people. It's almost like they weren't aware of the fear as much as they were like 'This sucks. Our summer's ruined.'"

With history playing such an active role in the narrative, Alyan felt a responsibility to make sure everything was completely accurate. "In today's society, I think you see the word Palestine and there will be people that will bristle one way or another. I think it's an identity that is contested even as being an identity," Alyan says. "Writing about the history of a place that is so contested was an intense process... If I was going to allude to a certain kind of violence taking place in a conflict, I had to know that there were eyewitness accounts that those sort of things had happened. Because I think that when we write about these sort of identities and these kind of stories, it doesn't take a lot to discount it, unfortunately."

Throughout the novel, each character grapples with their own relationship to Palestine — even the characters who never lived there. Alyan's own immediate family experienced displacement, as have many of the clients that she works with in her therapy practice. These experiences influenced her writing. "It really comes down to the inheritance of memory and of what we think of as being the place that belongs to us," Alyan says. "I'm really interested in the idea of people attaching themselves to places they've never been to. So, if you think of somebody who's fourth generation American and like way back in the day people came over from Palestine, then you're talking about people whose attachment to Palestine is really a Palestine that's been handed down over generations. so it becomes almost like a photograph of a photograph of a photograph of a place. And yet, the identity still feels really strong and really salient for people."

However, while Alyan was definitely interested in exploring Palestinian identity, she did not want that to be the only theme of the novel. "The idea that they're Palestinian is not the exhilarating thing about them, right? It's that they're this flawed, screwed up, wacky family — and they also happen to be Palestinian," she tells Bustle. "It's a tough balancing act, because I can't pretend that their Palestenianism, that their diasporic connections, don't contribute to their identity and to them being who they are. It plays a big role in who they love and where they go and what they do with their lives."

Salt Houses by Hala Alyan is on sale now.

More like this
Your Guide To Watching 'Everything Everywhere All At Once' In The UK
By El Hunt and Sophie McEvoy
I Read Prince Harry's 'Spare' So You Don’t Have To: 11 Highlights To Know
By Marina Watts
Keke Palmer Shares The Sex Of Her & Darius Jackson's Baby
By Jake Viswanath
Who Is Allison Williams Dating After Her Divorce? She’s Engaged With A Child
By Jake Viswanath
Get Even More From Bustle — Sign Up For The Newsletter
From hair trends to relationship advice, our daily newsletter has everything you need to sound like a person who’s on TikTok, even if you aren’t.