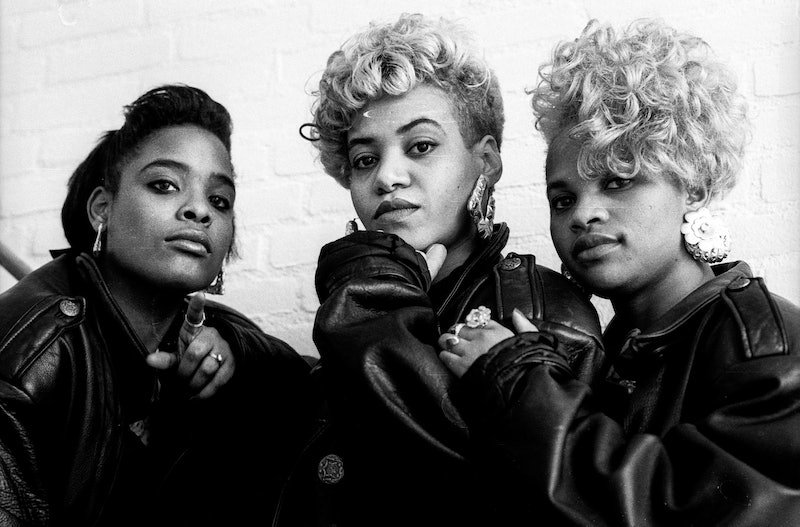 Salt-N-Pepa is regarded as a pioneering force of female rap. Back in 1986, Cheryl James (“Salt”) and Sandra Denton (“Pepa”), along with DJ Spinderella, became the first female hip-hop group to win a Grammy award and go platinum with their debut album Hot, Cool & Vicious and hit single "Push It." 30 years later, the trio keeps on achieving more firsts; in 2018, they became the first hip-hop act to land a Las Vegas residency, and they soon hit the road with fellow ‘90s R&B trio SWV on tour. Now, BET's Ladies Night, premiering April 30, is giving fans an inside look at the icons' journey together, and Salt-N-Pepa tells Bustle that the hope is for viewers to learn what the music industry is really like — especially for female artists.

“It's nice to have some seasoned, iconic women out there just kind of giving a little blueprint of the dos and the don’ts of the industries of hip-hop and R&B,” Salt explains, speaking alongside Pepa at the Viacom offices in New York City on April 18. “I think it was important to share our views, our struggles, our experiences, through the ups and the downs.”

The BET show, named for the tour made for '90s fans, shows Salt-N-Pepa, DJ Spinderella, and the women of SWV — Cheryl "Coko" Gamble, Tamara "Taj" Johnson, and Leanne "Lelee" Lyons — experiencing some deep bonding moments as well as challenging drama. “It’s hard enough to be in a group, now you got six girls together,” explains Salt. “This was a first for us and it was interesting to watch [SWV's] group dynamics and a lot of the challenges that they have. We identified with a lot of it, but we also... have our own challenges that play out on the show."

Between the tour with SWV, their own Vegas shows, and the added pressure of the Ladies Night team filming everything, Salt-N-Pepa admit that they overextended themselves. "They had us doing five days a week — not one week out [of] the month, every week,” Pepa says. Adds Salt, “I get anxiety in that environment because we really wanted to make Vegas great, and it was so much going on and then they add the cameras, it intensified my emotions."

In addition to performing, the group also worked behind-the-scenes to make their music and tour, adding to the stress. “The grind, the production — we put [a lot] into it because we're not just artists or talent. We are producers with everything. We are hands on to make this keep going," says Pepa. "And it's tough as women and bosses, because we have some men... [who] don't understand that we're being assertive, or not being bitches.”

The artists have dealt with sexism (as well as ageism — Salt is 53, while Pepa is 54) throughout their careers, and they take different approaches in their responses. Salt says that she focuses on simply making music she feels good about ("I feel like we can't compete with kids," she says), while Pepa doesn't let societal "rules" define how she wants to present herself. "If someone says, like, 'Oh God, she covered up,' I would be insulted," she says with a laugh.

However, the women are united in lifting up female rappers that have arrived in their wake, from Cardi B to Nicki Minaj. "I think it's great to piggyback on every female artist that comes out," Pepa says. "Give them notoriety. Let them be known because it's such a male-dominated field, still."

Salt-N-Pepa's continued success and motivation to succeed certainly sets an example for others. Just take their Vegas residency, I Love the ‘90s; it's a show that Pepa, for one, had been predicting would happen since the start of the group's career, despite people's skepticism. “The number one question for hip-hop was, ‘Would it last?’,” Pepa recalls the cultural thinking back in the late '80s and early '90s. “I used to always make this joke back then. I said, ‘We’re going to be in a casino performing in Vegas,’ and everybody was like, 'no.' That was always my vision somehow.”

Salt-N-Pepa is making it happen, and that's not all they're up to these days. There's a miniseries in the works based on their lives, and the women will hit the road once again this summer with New Kids On the Block. And although the artists have not released an album of new music in over 20 years, they hope to change that very soon.

“I think this year... we want to [release music]. We already have some music, and we would like to put it out there,” Salt explains. Adds Pepa: “We are. We in it, we're going to do it. And this is a great time for us to do it.” The world couldn’t agree more.