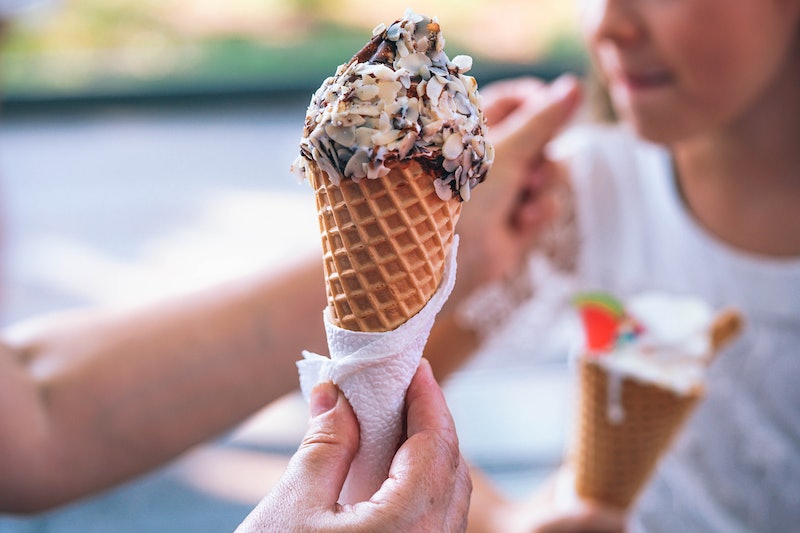 Most people, especially parents trying to get their children to choke down vegetables at dinner, would agree that far too much edible food winds up tossed in a landfill, but that doesn't make banana peels and celery leaves any more appealing. Luckily, that's where Salt & Straw's ice cream comes in. The Portland-based creamery has found a way to turn surplus produce into everyone's favorite sweet, summery treat, so you can fight food waste with every scoop.

Salt & Straw has locations in Portland, Los Angeles, and San Francisco. According to Eater, it's teamed up with nonprofits in each city to create special ice cream flavors made of "rescued" ingredients from local businesses. In Portland, for example, the creamery worked with Urban Gleaners to create flavors like Breakside Brewery’s Spent Grains & Bacon S'mores, which uses a base of pulverized spent grain — a byproduct of beer production — and bacon from a near-zero-waste pig farm. Other options include a vegan ice cream that utilizes a distillery's leftover cherries (Bourbon Distilled Cherries Ambrosia) and a flavor made of celery roots and leaves (Celery Root & Strawberry Celery Leaf Jam).

According to Los Angeles magazine, the creamery's Los Angeles locations offer their own flavors, such as the Salt-Cured Backyard Citrus Creamsicle. This tart ice cream uses unwanted citrus fruits from — you guessed it — Angelenos' yards.

Salt & Straw co-owner Tyler Malek told Fast Company he doesn't expect the project to end global food waste on its own, but that's not quite the point. The flavors are intended to draw attention to the problem, proving that it is possible to make something delicious out of food that would otherwise end up rotting in at a landfill.

According to the Food and Agriculture Organization of the United Nations, about one-third of food intended for human consumption is squandered each year across the world. The United States is one of the leaders in food waste; according to the Environmental Protection Agency's website, "more food reaches landfills and incinerators than any other single material in our everyday trash." I don't know about you, but I'm suddenly regretting every time I let leftovers go to waste in the back of the refrigerator.

If you're interested in Salt & Straw's rescued food project, you'll want to make a trip to one (or a few) of the creamery's locations soon — the flavors are only available until Jun. 30.