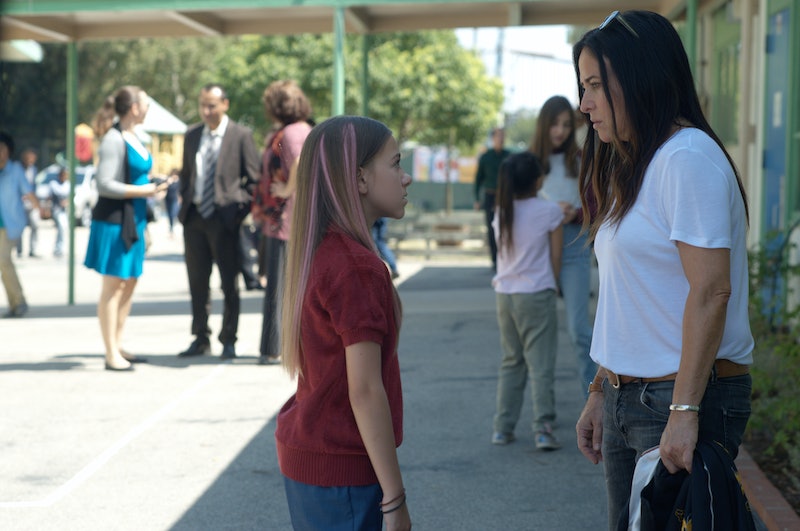 Spoilers ahead for Better Things Season 3, Episode 2, "Holding." Whether Sam (Pamela Adlon) realizes it or not, Duke is growing up on Better Things. As the youngest child, she's always been the sweet one. But, much to her mother's chagrin, Duke (Olivia Edward ) is starting to act out — a sure sign that she's starting to mature. During an event at school, Duke repeatedly has to ask her mom not embarrass her. And while that's a fairly normal thing for kids to ask their parents, it's soon revealed why Sam's daughter was so anxious in the first place.

Sam attends Science Night at Duke's school, where she begs her daughter not to leave her side because she "can't talk to parents." Viewers soon find out that Duke was bullied by a boy, and although she tells her mom that they're friends now, Sam's still seething that someone would hurt her baby. "I'm over it, so can you be, too?" Duke pleads. "He did a mean thing to me, not to you."

"Wow, that is a very, very grown-up thing to say," Sam responds, promising to be on her best behavior. Despite this, she butts heads with several parents, eventually asking Shak's mom to "step outside on the playground" so she can beat her up.

Ironically, Sam is the one acting like a child, while Duke is playing the role of an overwhelmed mom, pleading with Sam not embarrass her again.

This plot harkens back to several earlier scenes involving Sam's two older daughters: The first is when Sam begins commenting to a nearby couple about their clearly terrible date, much to her eldest daughter Max's (Mikey Madison) mortification. The second occurred when Sam gave a deeply embarrassing speech about womanhood and periods at Frankie's (Hannah Alligood) school. It's almost a rite of passage to be ashamed of your parents, and Duke finally joins the club in Better Things Season 3.

That said, Sam's youngest has always been a sensitive soul. Back in Season 2, Duke demanded to be eulogized alongside her mother, then got upset when everyone complimented her mom instead of her. So that she's starting to stand up for herself and defy Sam is a sure sign that she's becoming her own person. And while that's a difficult pill to swallow, Sam had to know that this would happen eventually.

While Sam's life is always hectic, Season 3 shows her in a new sort of flux. She recently broke up with a nice guy because she was scared it would become serious, Max has just left for college (out of state, no less), and her mom's health is continuing to degrade. The one constant in Sam's life is her two youngest daughters, but even they're continuing to evolve (because who doesn't?).

So when Duke announces that she's going to hang out with her friend, Pepper, until the next experiment and Sam asks her if she has to leave her alone, it's especially heartbreaking. Hopefully Sam will be able to accept the fact that her baby is growing up, and all of the changes that come with it, because it could mean better (or other, at least) things for her own life. She won't stop being a mother, but what being a mother entails is going to be totally different now that Duke is almost all grown up.