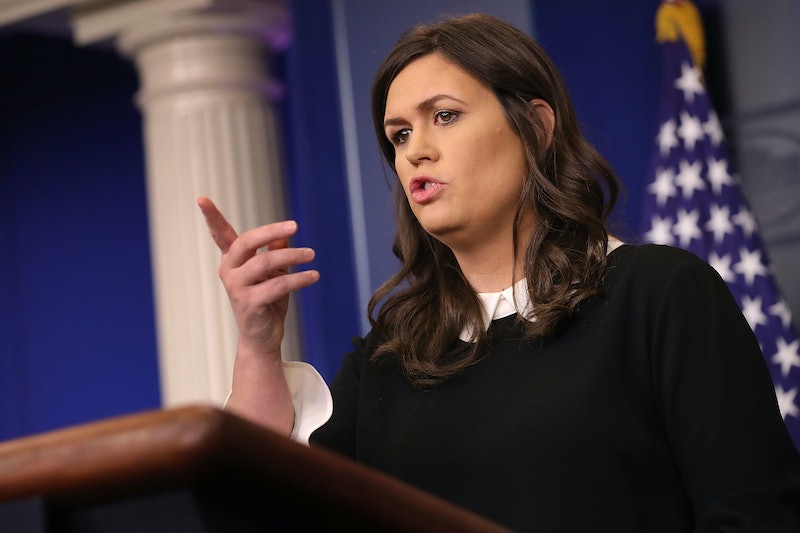 By now, you've probably heard about Donald Trump's former and controversial aide Sam Nunberg. He began working as a communications adviser for Trump in February of 2015, and had been fired by 2016. On Monday, following a series of rants about the Russia investigation, Nunberg called Sarah Huckabee Sanders a "fat slob" during an interview on NY1.

While speaking with NY1, Nunberg said, "You know what? You know what? If Sarah Huckabee wants to start debasing me, she's a joke. OK, fine, yeah, she's not attractive. She's a fat slob, OK, fine."

Nunberg then went on to say, "But that's irrelevant. The person she works for has a thirty percent approval rating, okay? So if she wants to start attacking me, she can do that, that's fine. But we know that's a joke."

Sanders has not responded to Nunberg's sexist description. The controversial ex-aide's comments arrive shortly after the White House denied Nunberg's remarks that implied Trump may have colluded with Russia during the 2016 presidential campaign. Trump has consistently denied any collaboration between his campaign and Russian leader Vladimir Putin's government, but Nunberg told NBC News on Monday that "I think that [Trump] may have done something during the election. But I don't know that for sure." He did not elaborate further.

In response to Nunberg, Sanders said, "I definitely think [Nunberg] doesn't know that for sure because he's incorrect. As we said many times before, there was no collusion with the Trump campaign. Anything further on what his actions are — he hasn't worked at the White House. I can't speak to him or the lack of knowledge that he clearly has."

Nunberg is no stranger to landing himself in the burning center of controversy. In 2016, Business Insider reported on Nunberg's Facebook account, revealing his history of racially incendiary posts. He had called Rev. Al Sharpton's daughter a racist slur and a comment on former president Barack Obama. Nunberg called him a "socialist Marxist Islamo fascist Nazi appeaser." The social media posts cost Nunberg his position as communications adviser to Trump. In a statement to CNN, he denied that those posts were his own and said that "anything that was posted under my name does not mean I posted it."

The controversy still lingered in 2017 when Nunberg ultimately apologized on MSNBC, noting, "I will apologize and I have apologized and I also want you to know that somebody of the MSNBC family, Reverend Sharpton forgave me. And I was fired and I suffered serious consequences."

In a conversation with CNN's Gloria Borger on Monday, Nunberg flat-out said he would not follow a grand jury subpoena that was directly related to the ongoing federal investigation on possible collusion between Trump and Russia. Nunberg said, "Screw that. Why do I have to go? Why? For what?"

Adding to that, Nunberg said, "I'm not a Donald Trump fan. He treated me like crap."

Perhaps the most stunning incident from Nunberg's back-to-back CNN appearances on Monday was the network's Erin Burnett asking if Nunberg had alcohol before appearing on-air. He denied it but Burnett said, "I have smelled alcohol on your breath."