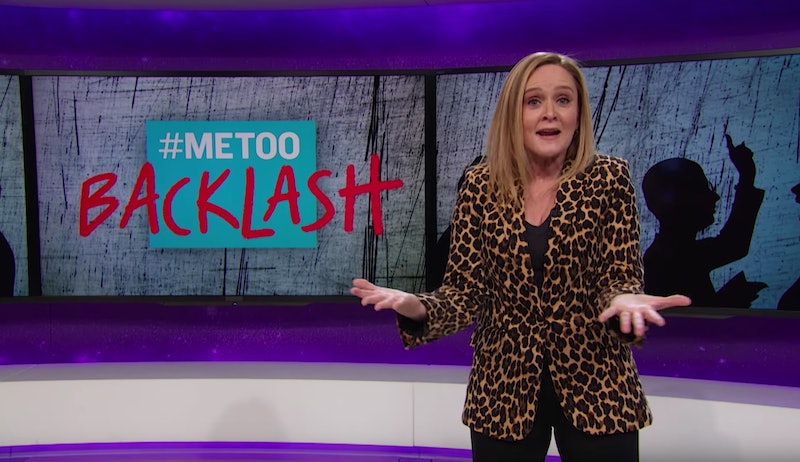 On Wednesday, late night comedy show host Samantha Bee addressed #MeToo backlash and the Aziz Ansari story that's being fervently debated this week. She defended Ansari's anonymous accuser, saying that he should have been looking for her nonverbal cues and that the encounter could still be legitimately upsetting without qualifying as rape.

Bee, like everyone else online this week, was reacting to a piece published on Babe.net accusing Ansari of sexually assaulting her on a date. Ansari is a comedian best known for his roles as Tom Haverford on Parks and Recreation and Dev Shah on Master of None. The woman — whose real name is not revealed, but who goes by Grace in the article — alleges that Ansari repeatedly made sexual advances while ignoring her cues that she didn't want to have sex. In a statement responding to the article, Ansari said that he and Grace "ended up engaging in sexual activity, which by all indications was completely consensual."

While most of Grace's cues were nonverbal, some were not. She alleges that she told Ansari she'd rather have sex "next time" and, when he asked if she was OK, said, "I don’t want to feel forced." But a lack of the literal word "no" has had many critics rushing to Ansari's defense, saying that he shouldn't be expected to have known how she felt. The New York Times, for example, ran an oped called "Aziz Ansari is Guilty. Of Not Being a Mind Reader."

Bee disagrees with that rationalization. In the segment, she argues that people should work to read their partners' verbal and nonverbal during sexual encounters. "If you don't want to tune into your partner's feelings throughout sex, maybe you shouldn't be f**king a person at all," Bee said in the segment. "May I suggest a coin purse or a ziploc bag full of grape jelly?"

Neither Grace nor Bee accuses Ansari of rape. Instead, Grace calls the event "sexual assault" and labels the evening "the worst night of my life." Bee argues that a sexual encounter doesn't need to involve rape to be deeply distressing.

"Here's the number of people who are putting rape and harassment and bad dates into one bucket: Nobody. Literally nobody is saying they're the same," she said. She argued that we should be "setting a higher standard for sex than just 'not rape.' And women get to talk about it if men don't live up to those standards. Especially if that man wrote a book about how to sex good." She was referring to Ansari's popular book Modern Romance: An Investigation, in which he writes about how sex and dating have changed in the digital age.

Bee also argued that Grace shouldn't be criticized for not leaving earlier in the night. "It's harder than you think to leave when you're uncomfortable or scared," she said. Many have used this defense to stand behind Grace, saying that uneven power dynamics can make it difficult for victims to change something that hurts them or that they don't like.

"We know the difference between a rapist, a workplace harasser, and an Aziz Ansari," Bee said towards the end of the segment. "That doesn't mean we have to be happy about any of them."