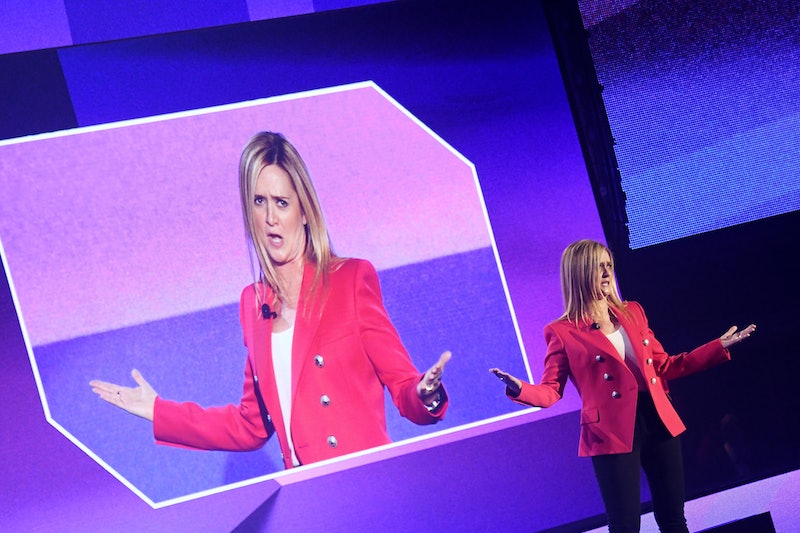 After The New York Times and The New Yorker published exposés of rape and sexual harassment allegations against Harvey Weinstein (claims he has denied), numerous late-night talk show hosts have addressed the subject. Stephen Colbert described Weinstein as a "human Shrek" and "bad person," while Jimmy Kimmel and Jimmy Fallon both cracked jokes at Weinstein's expense. But in a late-night world largely populated by men, the women of Late Night with Seth Meyers and Samantha Bee delivered the most powerful condemnations of Weinstein. As women, they were able to attest to the pervasive nature of sexual harassment in every walk of life in ways their male colleagues could not.

In her segment on Weinstein, which aired Wednesday night, Bee did not attempt to disguise her anger or frustration. Following Weinstein's statement responding to the initial Times story about the allegations — in which he attempted to blame his alleged behavior of women on the culture of the '60s and '70s — Bee slammed him for painting himself as a victim.

“Oh, give me a break, White Cosby," Bee said. "Nobody asked for your ‘all about mea culpa.’ Don’t blame the ’60s and ’70s for your shitty decision making. It’s serial sexual harassment, not a Monkees tattoo.”

Both parties have had their share of sexual harassers and predators. This is about men. Sorry, woke bros, but guys can be creeps, #NotAllMen. The extent of their creepiness seems to be a surprise to everyone except women.

But Bee's segment on the issue focused on more than Weinstein. She also broadened the scope to talk about the extremely pervasive nature of sexual assault:

We women have known men were gross since our sixth grade gym teacher said "good job" at the end of class and then massaged our shoulders that were somehow on the front of our bodies. And it doesn't get any better in adulthood, because sexual harassment is rampant in every profession imaginable: medicine, finance, technology, academia, publishing, restaurants. We tried to find one place where women were safe so we Googled "sexual harassment Antarctica" — and we found this article from five f--king days ago. You can't even go to the most remote part of the planet without some dude swinging his cold shriveled dick your way.

It was this part of her segment that made it clear why late-night TV, along with every other industry, needs more women. Women all over the world, in almost every single profession, know what this feels like. Bee was able to tackle this subject so skillfully because as a woman, she can speak to these experiences — while Colbert, Kimmel, and Fallon, with all their good intentions, could not.

Neither could Seth Meyers, but three female show-writers on Late Night — Amber Ruffin, Ally Hord, and Jenny Hagel — definitely could, and did. Ruffin, Hord, and Hagel have previously discussed sexual harassment on the show, and they returned on Monday to discuss Weinstein.

Ruffin started the conversation by asking him what he thought of the allegations made against Weinstein, and the following dialogue ensued:

Meyers: I was disgusted and shocked. How did you feel?

Ruffin: Well, I was disgusted and not shocked.

Hord: I was disgusted and shocked that it took this long to become a story.

Hagel: I was disgusted and shocked that people were shocked.

This opening exchange further highlighted why the absence of women in media spaces must be remedied. Ruffin, Hord, and Hagel then went on to applaud all the women who have come forward about Weinstein. They also dismissed Weinstein's claim that he was going to double down on the NRA and Trump, noting that their "shared politics" with Weinstein did not make his sexual assault OK.

The three women concluded with a critical point: that men who don't occupy positions of power are also sexually harassing women everyday, even if we don't see headlines about them. Consequently, they called for sexual harassment training, and for people to believe women when they come forward to talk about sexual assault. "Also, men could just stop being such creeps," Hord suggested.

It is worth noting that many men — including the male talk show hosts mentioned here — have been quick to condemn Weinstein and to express their shock and disgust. However, Bee, Ruffin, Hord, and Hagel all made it clear that the truly shocking thing is how often cases of sexual assault and harassment go ignored.