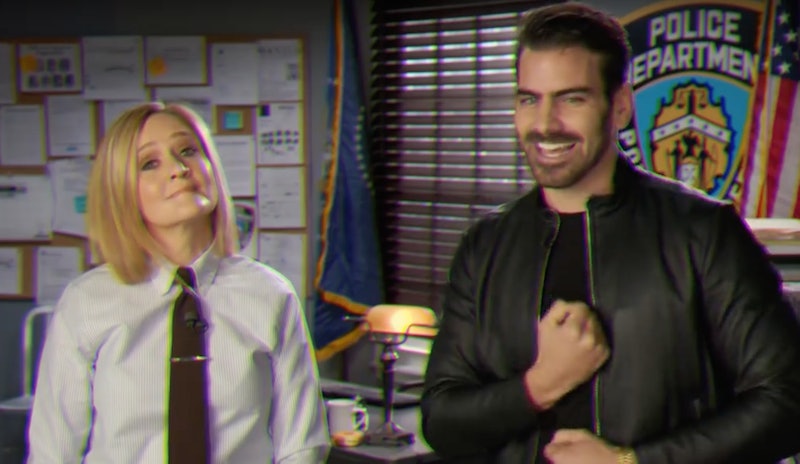 Although it's not often talked about, people with disabilities are more likely than others to be victims of police brutality. Comedian Samantha Bee brought awareness to the issue on the Wednesday segment of her show, Full Frontal. Reminding viewers that "Deaf Lives Matter," Bee addressed how police bias can affect the Deaf community.

Bee brought in some glamorous backup in the form of Nyle DiMarco, an activist who became the first Deaf winner of America's Next Top Model in 2015. DiMarco has a big presence on social media and uses it to advocate for the Deaf community; he was just nominated for a Shorty award for being an activist influencer. He's also worked on an app to teach American Sign Language and started a nonprofit that works to empower Deaf people, in part by giving parents of Deaf kids access to information about early bilingual education (i.e. education in both American Sign Language and English).

On Bee's segment, DiMarco broke down some of the common ways that police officers can mistreat Deaf people. "As a cadet, your training barely covered the importance of how to interact with America's 1 million Deaf citizens," he began. An additional 10 million people in the United States are hard of hearing.

"Lesson number one," DiMarco explained, "American Sign Language is naturally big and expressive. But some officers mistake it as wild or aggressive." In 2014, for example, a Deaf man named Jonathan Meister was confronted by police while he was picking up his stuff from a friend's porch. When he tried to use ASL to explain the situation, the officers restrained him. Meister fought to get free so that he could use his hands to communicate, at which point the police allegedly beat and Tasered him until he was unconscious (the police department stated that the officers did not mishandle the situation).

It's important to remember that ASL is not the same thing as English, as DiMarco noted on Full Frontal on Wednesday. He explained, "Many Deaf people can't read or write English fluently because of 'language deprivation.'" While some Deaf people will choose to write down English to communicate with those who are not hearing impaired, DiMarco says you should never ask a Deaf person to write down what they're trying to convey.

You also shouldn't ask people to read your lips. "Deaf people reading lips is an impossibility," Opal Gordon, a Deaf activist, told Full Frontal. "There's no way. It's something hearing people dreamt up. It's too easily misunderstood."

Instead, DiMarco said, "Call an interpreter. And call a certified one, because there are a lot of ways you can get this wrong." The 2010 Americans with Disabilities Act requires that governments and other institutions that serve the public provide interpreters for people with communication disabilities if the institutions are unable to communicate effectively with them.

Statistics vary but tend to suggest that at least 25 percent of the people killed by police have disabilities, according to Vox. But many police departments around the country last year began special training to learn how to appropriately interact with Deaf people.

"The Deaf and hard of hearing communities really want to form this alliance and work with law enforcement," Gordon told Full Frontal. "We're all Americans and we all have to work together."