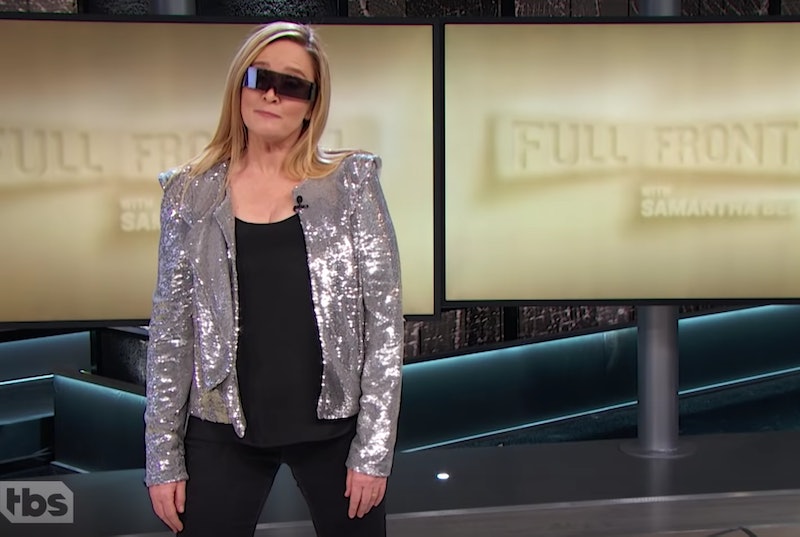 The blue wave brought in by the midterm election may mean more Democratic lawmakers take office in January, but GOP leaders in multiple states quickly went to work ensuring the opposing party didn't gain too much power. On Wednesday night, Samantha Bee warned Americans about the downfall of democracy by "traveling back in time" from 2068.

"I've traveled back in time to warn you that 2018 is the year the downfall of American democracy began," the comedian said on Full Frontal with Samantha Bee. "In 2068, America hasn't been a democracy for a very long time. I can barely remember when we used to vote for American Idol instead of just killing aspiring singers in a field until one of them rises victorious and bloody to sing one televised song, and then is also killed."

Bee first pointed to Florida, where Republicans stalled a successful ballot measure that restored voting rights for people convicted of a felony. Despite voters passing the proposal, The Tampa Bay Times reports that Secretary of State Ken Detzner said the legislature should have a say in the matter.

"It would be inappropriate for us to charge off without direction from them," Detzner told reporters earlier this month.

Up next: Wisconsin. State Republicans approved multiple bills that give more power to the legislature after Democrats won both the races for governor and attorney general in November. "Power-hungry politicians rushed through sweeping changes to our laws to expand their own power and override the will of the people of Wisconsin who asked for change on November 6th," Gov.-elect Tony Evers said in a statement to CNN. Republicans in the Wisconsin state Senate also rushed to approve 82 of the current governor's appointees in a single day just before Evers takes office.

"All of this might seem like it flies in the face of voters, but the Wisconsin Assembly's Republican speaker, Robin Vos, had a really good reason," Bee explained. She then played a clip of Vos telling the state Assembly that they're about to have "a very liberal governor who is going to enact policies that are in direct contrast to what many of us believe in."

"Yeah, if you let the other party take power when they win, it'd almost be like an election had happened," Bee said.

Michigan Republicans took a similar approach to those in Wisconsin after Democratic women won the races for governor, attorney general, and secretary of state.

"Don't worry, they'll let the ladies decide where to put the tampon dispenser in their bathroom," Bee said. "Once they build them a bathroom."

Over in Ohio, GOP lawmakers are seeking to force people trying to get an amendment on the ballot to obtain hundreds of thousands of signatures in the winter. In Utah, Republicans are vying to tweak a medical marijuana bill to limit edibles to a chewable or dissolvable gelatin cube, among other oddities. "This sh*t was everywhere," as Bee put it.

"I rented a time machine and came back here to tell you 2018-ers to take all these abuses of power and the system really f*cking seriously," Bee said. "You should be worried by how brazenly Republicans now ignore the will of voters."

More like this
Watch Jacinda Arden’s Devastatingly Honest Resignation Speech
By Sam Ramsden
Eurovision Has Been Given A Whole New Look Ahead Of Its Liverpool Debut
By Bustle UK
Man Meets Politics: ‘Boy Meets World’ Star Ben Savage Is Running For Congress
By Jake Viswanath
8 Charities To Donate To During Black History Month
By Alexis Morillo
Get Even More From Bustle — Sign Up For The Newsletter
From hair trends to relationship advice, our daily newsletter has everything you need to sound like a person who’s on TikTok, even if you aren’t.