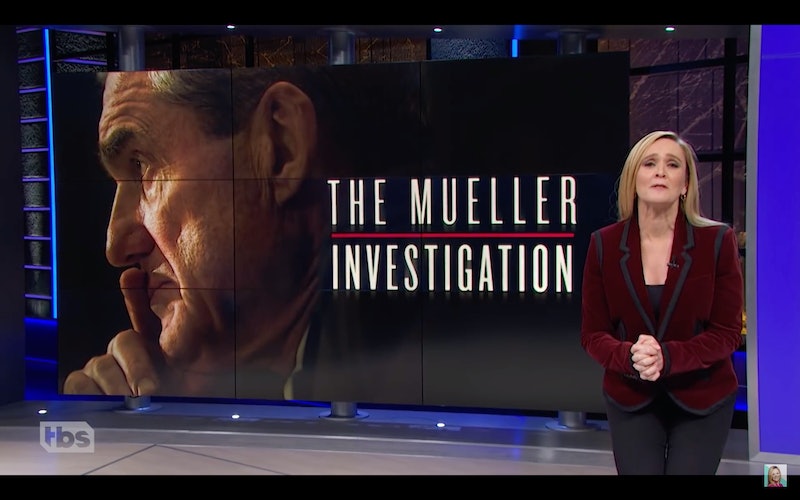 After weeks away from your television screen, the only woman of late-night comedy is back! To honor her return, Samantha Bee celebrated the Russia investigation's latest developments, including the withdrawn plea agreement of former Trump campaign manager Paul Manafort and Roger Stone's alleged collaboration with WikiLeaks.

In late November, Special Counsel Robert Mueller accused Manafort of "lying ... on a variety of subject matters" after signing the plea deal to cooperate with the investigation. "Finding out that one of your star witnesses has been lying to you might seem embarrassing to the special counsel, like if you got cheated on by your boyfriend, Ed Hardy," Bee said.

But special counsel super fans — what Bee has dubbed "True Mulliacs" — have another idea. "Maybe he wanted Trump and Manafort to share information so he could show they're both lying the same lies," Bee mused, before playing a clip that claims there's no line in Manafort's plea agreement that bars him from sharing his information with a third party, unlike, say, former Trump campaign adviser Rick Gates's plea agreement.

While a news anchor said this was still a bit too close to a conspiracy theory, Bee said she's ready to go all in. "Well, I am prepared to go there, and I am pretty Hollywood conspiracy stuff," Bee said.

After all, Bee is a member of "the Muellitary," meaning she's one of the special counsel's super fans. "Robert Mueller, you sneaky son of bitch," Bee said. "I never thought I would be so turned on by a man who looks always like he has mumps."

"If it is what happened," Bee said, referring to Mueller's alleged long-game of setting Manafort up with the opportunities to commit perjury, "it is absolutely allowed. Despite what you may have heard on Fox News, Mueller does not have to save Trump from incriminating himself."

Enter Fox News host Sean Hannity, who is taking this as an opportunity to invent a new word for "perjury traps" calling it "testi-lying."

Not so fast, Bee said. "No, 'testi-lying' is how women have to pretend that balls aren't gross. They look like Muppets and they taste like Muppets," Bee said.

Despite her truth bombs about testicles, Bee still wanted her views to understand the potential fallout of Manafort's alleged lying. "What Hannity is talking about is lying to federal investigators, and it is a crime. We don't know if any of this will come back on Trump in the end, but at least a few more of the people who surround him will go to jail," Bee said. "And in the spirit of the holidays, let me just say, it is fun to watch these stooges squirm."

And one of those, as Bee called them, stooges? One-time Trump adviser Roger Stone, who has been on TV recently to deny any collaboration with WikiLeaks. (Watch the clip to see what Bee thinks is Stone's tell when he's lying.)

The inner circle could be turning on one another, and that is a holiday miracle, Bee said. "One Trump associate after the other is turning out to be in deep, deep trouble. So this holiday season, as the Trumps gather around the blood tree, Trump will probably be at least a little afraid that it'll be his last Christmas in the White House," Bee said. "Mueller Christmas, everyone."