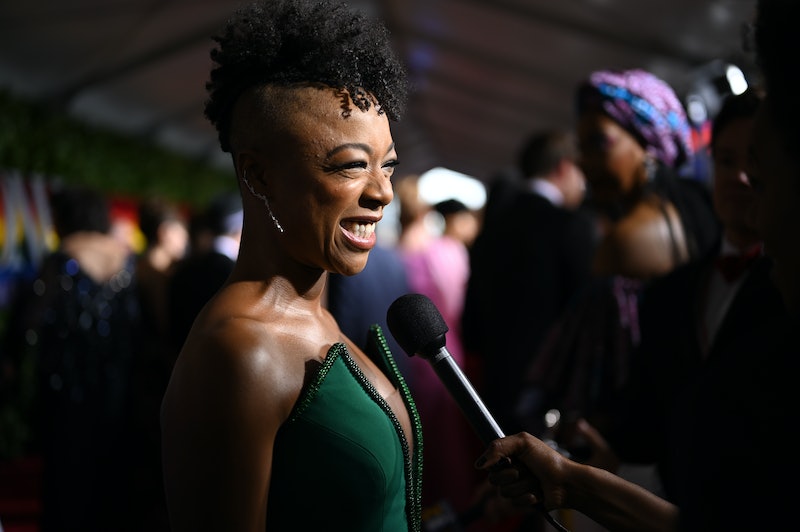 Get ready to turn as emerald as Elphaba. Samira Wiley's 2019 Tony Awards dress will make you green with envy — literally. Wiley, who is beloved for her work in both Orange Is the New Black and The Handmaid's Tale, wore an unforgettable, emerald green gown to the ceremony. Wiley was on hand as a presenter at the event on June 9.

The bodice of Wiley's gown, which was created by Pamella Roland, had a unique construction. It was strapless yet featured a sparkly trim and a deeply dipping V-neck that looked like panels. The bottom half of the dress boasted a major slit, which was also trimmed in glitter that was slightly darker than the rest of the fabric.

Rather than pile on huge necklaces, gobs of bangles, or overly blingy and dangling earrings, Wiley allowed the fabulous shape and design of her jewel-toned dress to take center stage. She nixed an overload of accessories in favor of a few rings and baring her glowing shoulders and arms. It was a simple but beautiful look, and it's actually a repeat fashion move for Wiley. She never buries herself in a bunch of jewelry. Instead, she lets her hair, makeup, and outfit tell a cohesive style story. It's a sartorial signature that totally and unquestionably works for her.

Wiley paired her short, natural curls with lovely eye makeup that matched her dress and shoes. She finished her Tonys beauty look with a slick of nude lip gloss and luminous cheeks.

Wiley's small and sparkly clutch matched her chic dress. Her strappy and silver heels provided a subtle metallic contrast to the bold color of her dress. They were also a terrific complement to her drop earrings. Wiley was easily one of the best dressed celebrities to waltz down the 2019 Tonys red carpet.

That's usually the case, though. Wiley's Tonys look somewhat mirrored her fashion M.O. at recent red carpet events. At the 2019 Vanity Fair Oscars party back in February, she shimmered in a metallic silver gown. It had long sleeves but also featured a dipping V bodice that was similar to her Tonys dress. Clearly, the actor likes — and looks amazing in — this particular silhouette.

At the 2019 Screen Actors Guild Awards in January, Wiley went with an anything but basic LBD. Her criss-crossed Georges Chakra Haute Couture gown boasted a ruffly, ethereal hem and a statement slit. Once again, the actor skipped bold accessories. Yes, you are seeing a pattern that is a proven success.

At the 2019 VH1 Trailblazer Honors, Wiley once again wore a stunning strapless dress. This black and silver dress frock almost functioned like an optical illusion. It looked like a melted zebra print and was another winning look for the actor.

Wiley's emerald-hued Tonys dress may have been the color of a precious gem. However, she showed fans that you can keep the accoutrements low key and still blow the roof off with your look. Ultimately, her ensemble will leave you eagerly awaiting her next red carpet appearance. She brings it every single time.

More like this
Florence Pugh Just Recreated Winona Ryder's 'Beetlejuice' Wedding Look
By El Hunt
Kylie Jenner Wore A Stunning Corset Dress For Paris Couture Week
By Dominique Norman
'Love Island' Tanyel's Latex Versace Dress Was Gifted By A Former Islander
By El Hunt
Kylie Jenner Rocked A Very Kim Kardashian-Esque Outfit At Couture Week
By Allie Fasanella
Get Even More From Bustle — Sign Up For The Newsletter
From hair trends to relationship advice, our daily newsletter has everything you need to sound like a person who’s on TikTok, even if you aren’t.