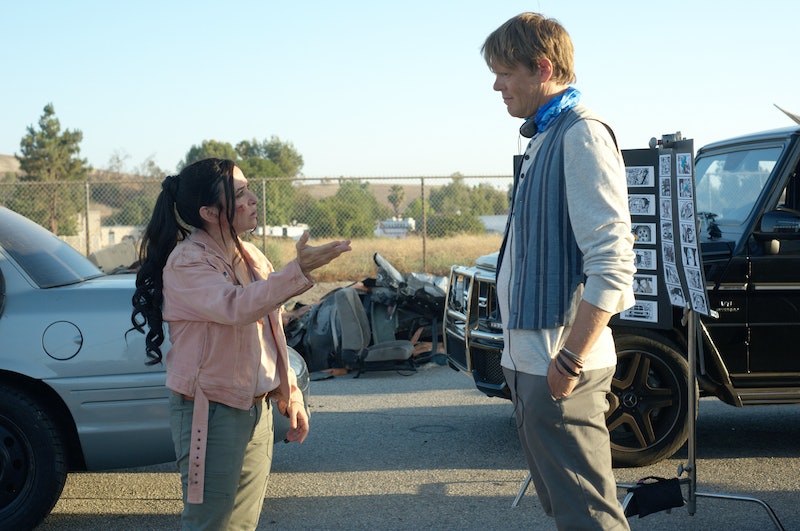 Spoilers ahead for Better Things Season 3, Episode 4, "Monsters in the Moonlight." Sam Fox (Pamela Adlon) is not to be trifled with, and she finally gives the director a piece of her mind this week on Better Things. Audiences have seen her on the set of this zombie movie, Monsters In the Moonlight, twice now, but she finally snaps after participating in a stunt that may or may not have been legal. Sam's speech on Better Things sheds light on not just how bad conditions on set can be, but how terrified everyone is to speak up.

It's already been made crystal clear that the Monsters in the Moonlight set is not exactly up to union standards. There's only one porta-potty for the entire crew (except the director), and a few episodes ago, Sam learned that she was making significantly less than her male costar. But the final straw was a dangerous car-driving scene, which she is continuously assured is not a stunt. Sam, her co-star, and the child actor playing their daughter are all put in harnesses, which the director then orders them to take off.

The vehicle they're "driving" is clearly a stunt car, but a crew member named Nikki keeps referring to it as a "pod car" and that it is no way a stunt. And every time Sam voices her growing concerns, Nikki dismisses her, saying, "You're so funny!" But after she and her two costars veer all over the highway into oncoming traffic, a 23-year-old pod driver at the helm above, both Princess and Dante immediately throw up.

After the whole ordeal, she marches up to the director, Tibor, to give him a piece of her mind. "Was that legal, what just happened?" she asks, agitated. "Aren't you supposed to be protecting everybody a lot more than what just happened?" Even worse, Sam then discovers that they had a safety meeting that morning, which they didn't invite her to, and she meets the stunt coordinator, whom she'd never met before. She says:

"The point is, we are making a multi-million dollar, blockbuster movie, and everybody's scared! And nobody's going to say anything! And we're all supposed to be feeling really lucky...to be working with you, and I don't feel lucky.... People aren't being taken care of — they're being sh*t on!"

But even after her inspiring speech, which visibly resonates with many of her coworkers on set, Sam doesn't get so much as an apology from the crew.

Sam is right — the corner-cutting that they've been getting away with on set may have disastrous, deadly consequences. Furthermore, this storyline is directly pulled from Adlon's own life. In an interview with the New Yorker, the Better Things showrunner explained that in the 1990s, she was in a monster movie called The Gate 2: Trespassers. She had to perform what was clearly a stunt (but was not labeled a stunt), where she was pulled through the ceiling wearing a harness. Adlon was rendered unconscious, and after speaking out, she received an $800 stunt fee, per the article.

"This was, like, my MeToo response," Adlon told the publication, referring to Sam's Better Things rant. "Which I think is more rampant than the other stuff, and nobody talks about it." She continued, saying, "It's producers, it's studios, it's directors. Everybody's afraid to say something. People are afraid for their jobs."

So although it remains to be seen how Sam's speech will effect the Monsters in the Moonlight set (if at all), at least she can rest assured that she's spoken out. And fortunately for Adlon, the awful experiences she's had during shoots have allowed her to create a much healthier environment on her own show. "I look at the people who work on my show as my children," the Better Things showrunner told Bustle in an interview. She continued, saying, "[I want] my actors to feel safe, for them to get direction from me in a nurturing way as opposed to directors who come in and have nothing to offer, or directors who come in and they're so heavy-handed. My crew's able to operate at a very high frequency."

This seems like a direct jab at directors like Tibor, who makes his young, female assistant follow him around with an umbrella, shading him like he's Queen Victoria. "I'm just modeling a kinder, more efficient, more artful way of running a show," Adlon told Bustle. And thank goodness she is, since there are more Tibors where he came from.