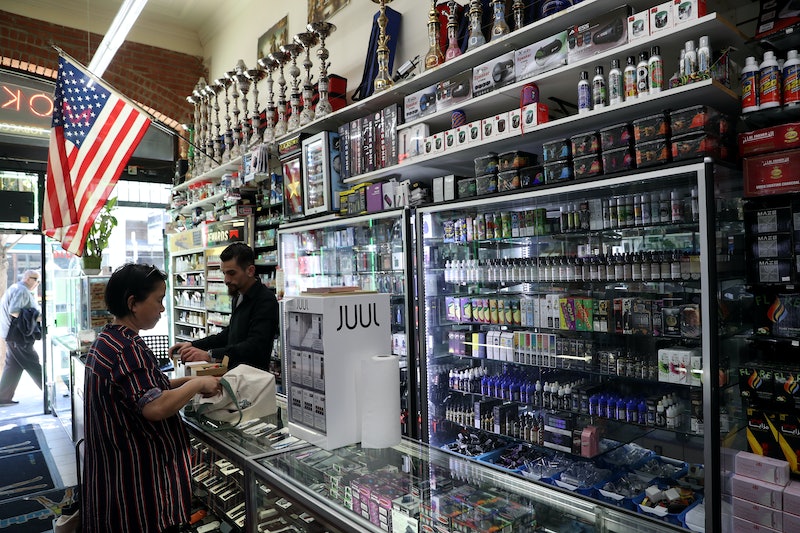 On Tuesday, a California city took an unprecedented step in its push to combat youth nicotine addiction. San Francisco banned the sale of e-cigarettes, becoming the first city in the country to enact this type of measure. The city's board of supervisors voted unanimously in favor of the ban.

CNN noted that the ordinance bans the sale of e-cigarettes in physical stores and online, if the product is sent to an address in the city. The measure will go into effect 30 days after Mayor London Breed — who has previously expressed strong support for the ban — signs it.

"I support the legislation ... to suspend the sale of e-cigarettes in San Francisco until the Food and Drug Administration concludes a review of the impacts of vaping on public health," Breed said to CNN prior to the vote on Tuesday. "There is so much we don't know about the health impacts of these products, but we do know that e-cigarette companies are targeting our kids in their advertising and getting them hooked on addictive nicotine products."

Notably, the top manufacturer of e-cigarettes, Juul, is based in San Francisco. The company strongly condemned the ordinance outlawing the sale of its product in a statement to the network on June 25.

The new law will "drive former adult smokers who successfully switched to vapor products back to deadly cigarettes," Juul said in its statement to CBS MoneyWatch. Furthermore, it will "deny the opportunity to switch for current adult smokers, and create a thriving black market instead of addressing the actual causes of underage access and use."

However, Shamann Walton, a board of supervisors member and co-author of the ordinance, noted to The New York Times that he believes that a ban on the sale of the product is required in order to stop teenagers from becoming addicted to it.

“We’ve worked for decades to decrease tobacco usage and try to end nicotine addiction,” Walton said to the paper. “Now you have this device loaded with nicotine and chemicals that’s drawing people to addiction. We need to keep it out of the hands of young people.”

As CNN described, the ordinance specifically prohibits the sale of any e-cigarettes that haven't received a premarket review from the U.S. Food and Drug Administration (FDA). So far, no electronic cigarettes currently on the market have undergone this review, as the FDA has postponed the review process, The New York Times noted. As CNN indicated, the new ordinance will actually be fully implemented six months after the mayor signs it, so there is still time for the FDA to conduct a review of the product in that period if it so chooses.

The FDA did not offer comment on San Francisco's new ordinance, but said in a statement to CNN that "the FDA has and will continue to tackle the troubling epidemic of e-cigarette use among kids."

According to a Centers for Disease Control and Prevention (CDC) report released in February, there has been a substantial rise in tobacco use among American middle and high schoolers that has been "driven by a surge in e-cigarette use." The report further revealed that "there were 1.5 million more youth e-cigarette users in 2018 than 2017, and those who were using e-cigarettes were using them more often."

Time will tell how much of an impact San Francisco's new ordinance will have on curbing youth e-cigarette use — and whether it will prompt the FDA to take further action on the matter.

More like this
Here’s What Health Means To People In 2023
By Isabella Biedenharn
Here’s Where The NHS Nurses’ Strike Currently Stands
By Sophie McEvoy
Watch Jacinda Arden’s Devastatingly Honest Resignation Speech
By Sam Ramsden
What The UK Blocking Scotland’s Gender Recognition Bill Means
By Sam Ramsden
Get Even More From Bustle — Sign Up For The Newsletter
From hair trends to relationship advice, our daily newsletter has everything you need to sound like a person who’s on TikTok, even if you aren’t.