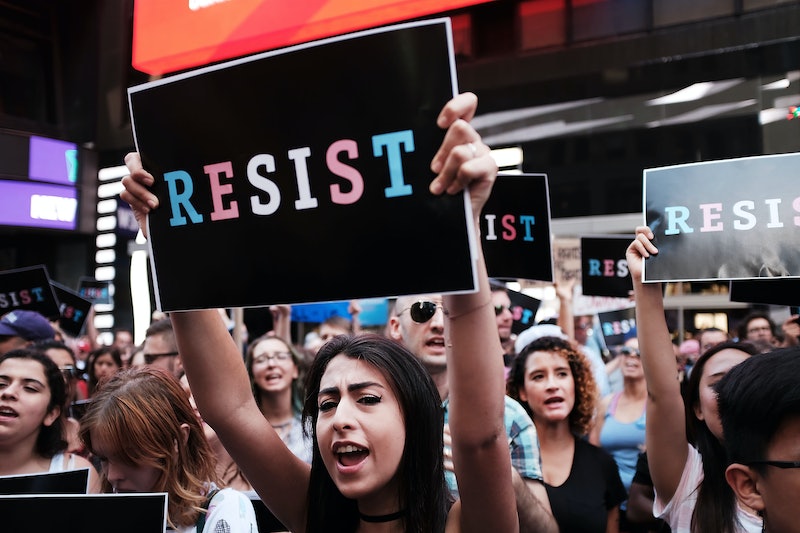 On Thursday, the city of San Francisco sued the Trump administration over its recently-finalized "conscience" rule, which would make it easier for health care professionals to refuse certain types of health care because of their religious beliefs. San Francisco's lawsuit against Trump's "conscience" rule argues that the regulation is unconstitutional, and should be blocked from taking effect.

The rule in question would allow health care workers to opt-out of procedures or treatments that violate their personal religious beliefs, such as abortion, sterilization, or administration of birth control. It applies not only to physicians, but to anybody with an "an articulable connection to a procedure, health service, health program, or research activity." Opponents say the regulation could result in patients being denied lifesaving care, and pave the way for physicians to refuse treatment to LGBTQ patients.

“At its core, this rule is about denying people medical care,”San Francisco City Attorney Dennis Herrera said in a statement. “This administration is willing to sacrifice patients’ health and lives — particularly those of women, members of the LGBTQ community, and low-income families — to score right-wing political points. It’s reprehensible."

The Trump administration first announced the proposed regulation in 2018, and immediately drew strong objection from reproductive rights groups. However, the rule was only finalized on Thursday.

"People’s health should not be a political football," Herrera said in his statement about the city's lawsuit. "The intent of this new rule is clear: it’s to prioritize religious beliefs over patient care, thereby undermining access to contraception, abortion, HIV treatment and a host of other medical services. We are not going to let the Trump administration push our country back to 1940s health care.”

The city is arguing that the new regulation violates several provisions in the Constitution, including the Administrative Procedure Act, the spending clause, and the separation of powers principles; Herrera said that if San Francisco doesn't comply with the new regulations, it risks losing $1 billion in federal funds.

Fatima Goss Graves, President and CEO of the National Women’s Law Center, called the new regulation "an underhanded attack on the health and lives of patients," and pledged to fight it.

This rule allows anyone from a doctor to a receptionist to entities like hospitals and pharmacies to deny a patient critical – and sometimes lifesaving – care. Personal beliefs should never determine the care a patient receives. This is a vicious and underhanded attack on the health and lives of patients, particularly targeting women and LGBTQ individuals. We will fight against it until all patients get the care they deserve.

Democrats slammed the new regulation as well, with Speaker of the House Nancy Pelosi saying in a statement that it amounts to "an open license to discriminate against Americans who already face serious, systemic discrimination."

“Since Day One, this Administration has waged a cruel campaign of intolerance and discrimination targeting the civil rights of our most vulnerable communities," Pelosi said. "House Democrats fully, flatly reject these attacks on LGBTQ Americans and on the rights of all Americans to get the health care they need and will fight these hateful actions."