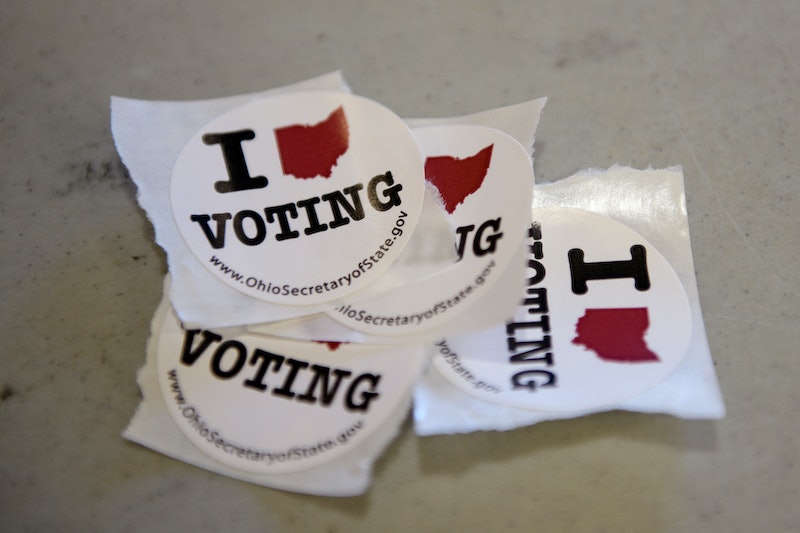 City officials in Ohio are officially shaking it up with their calendar, and they're doing it for a good cause: voter participation. Specifically, the city of Sandusky, Ohio is making Election Day a paid holiday every year, according to The Hill. The news comes after a recent public meeting in the city, as reported by The Sandusky Register, in which city officials confirmed that not only was Election Day a newly recognized paid day off, but that Columbus Day was given the ax in exchange.

According to The Sandusky Register, city manager Eric Wobser said, "We are swapping them to prioritize Voting Day as a day off so that our employees can vote. It’s also because Columbus Day has become controversial, and many cities have eliminated it as a holiday.”

Election Day generally falls on the first Tuesday in November; the local publication reports that this new rule will take effect next fall. In a Facebook post, the city of Sandusky released a statement that read,

Sandusky is proud to recognize Election Day as a holiday. What better way to celebrate the value of our employees and citizens than by removing barriers for them to participate in the greatest of American innovations, our democracy.

The role of Columbus Day in U.S. culture has been increasingly unpopular in recent years, given the extreme suffering his journey inflicted on Native Americans. According to Time, four states celebrate some form of Indigenous Peoples' Day instead of Columbus Day (Minnesota, Alaska, South Dakota, and Vermont), and over 50 cities do as well, as of 2017.

It appears that Americans might be all for this idea, too: A poll conducted by Hill.TV and the HarrisX polling company revealed that a majority of voters supported the idea of Election Day being deemed a national holiday. Specifically, 63 percent of Democrats, 50 percent of Independents, and 48 percent of Republicans supported the idea. Another poll by Pew Research Center found an even higher level of support for the idea, with two-thirds of voters supporting the measure; the research center also noted that a majority of industrial democratic countries currently hold their elections on the weekends, which adds some depth to the issue of voter turnout in America.

As it turns out, there's a chance Election Day will become a nationally recognized holiday in the near future. Per CNBC, the first bill introduced by House Democrats in the new year included, among other things, a proposal to make Election Day a nationally recognized holiday. The news network also notes that the only reason Election Day was initially established as a Tuesday tradition was because America was an agrarian culture at the time of its founding, and weekends were largely saved for religious services.

After House Democrats introduced the bill, Congresswoman Anna Eshoo said to CNBC of the Election Day measure, "Congress should do everything it can to make it easier for Americans to vote, not harder. That’s what this bill does.”

So, the Election Day holiday may be coming to a city near you next fall.