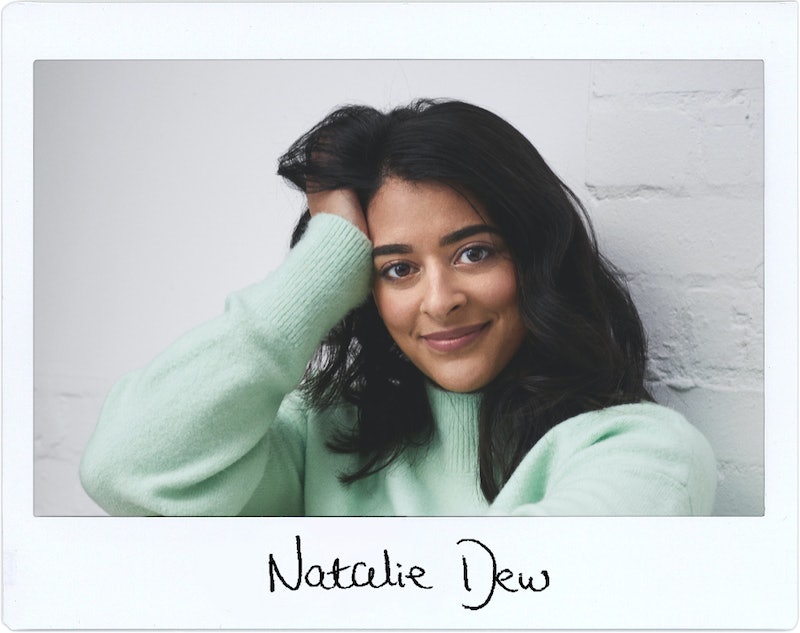 When celebrities hang out with Bustle writers, we want to give them the chance to leave their mark. Literally. So we hand them a pen, a piece of paper, a few questions, and ask them to get creative. This time, actor Natalie Dew is leaving her mark in the Bustle Booth.

While there's no exact recipe for a great comedy, Natalie Dew is confident that Sandylands has the perfect ingredients to leave you in a fit of giggles. Mainly because that's exactly what happened to her when she first read the script. She says, “It was weird and bonkers and I genuinely laughed when I read it.”

Also starring Sophie Thompson, Simon Bird, and Sanjeev Bhaskar, the new Gold comedy tells the story of Emily, who returns to her hometown to work out where her missing father has gone. However there’s a twist. He isn’t missing at all and she then has to try and hide him with hilarious consequences. “Emily’s a really fun character because she’s at the age where she’s still trying to figure herself out but she also really needs looking after herself,” says Dew, “it’s that nice balance of trying to be grown up but completely failing at adulting.”

An accomplished actor of both stage and screen, Dew has previously appeared in shows such as Gavin and Stacey and has been nominated for a Laurence Olivier Award for her performance in Bend It Like Beckham: The Musical. For her, acting has always been a passion. “I’m an only child and my parents put me into drama class so I could meet other children. As I got older it was the only constant in my life. I wasn’t bad at school but I wasn’t great and nothing else filled me in the same way that acting did,” she says, “I didn’t have a back-up plan so I genuinely don’t know what else I would have done.”

From comedic roles in shows like Sandylands to playing some of Shakespeare's most well known parts in Twelfth Night and Romeo & Juliet, Dew says it’s the variation in her job she loves the most. “I’m trying to be better at doing things that scare me,” Dew says, “if you can do any role that scares you a little bit the sense of achievement once you’ve done it is so great.”