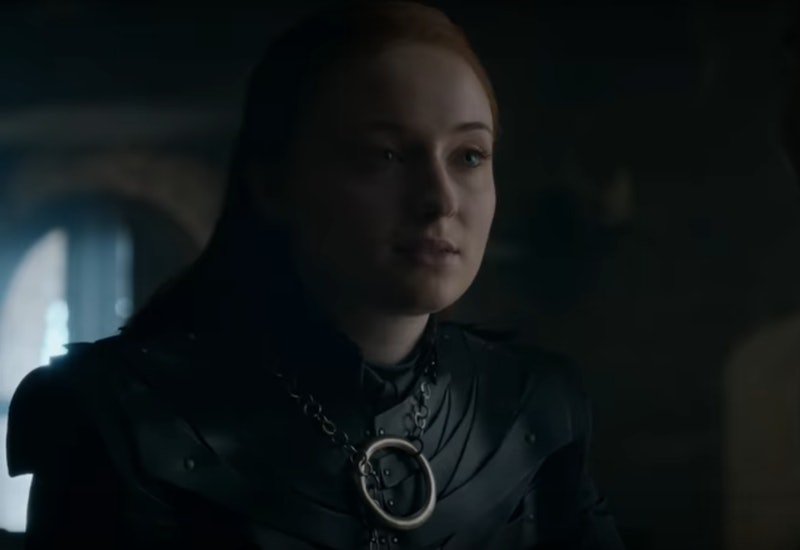 People who have been sucked into the wormhole of Game of Thrones plot details are always in search of the minuscule pieces that make up the story of Westeros. As fans of the show dig deeper for clues about what’s to come in the final season, the meaning behind Sansa Stark’s chain necklace has been revealed. And the hidden message makes total sense.

Fans already know Sansa’s had one of the most drastic character developments on the show and her necklace is symbolic of her transformation. According to Refinery 29, the eldest Stark sister has actually been sporting the chain necklace in question since Season 5 of the show. However, the chain necklace gained more attention as a statement piece in Sansa's constricting jet-black leather outfit in the second episode of Season 8.

The jewelry piece is a large chain featuring a circle with a slim shard of metal through the middle. And while it's not new to fans, no rock can go unturned for significance in a piece of jewelry that’s been seen in the last three seasons.

Game of Thrones costume designer Michele Clapton spoke in an interview with Refinery 29 on how each individual piece that makes up the jewelry has meaning behind it.

“The circle is often used to represent unity and commitment,” Clapton said. “They are associated with women's strength.”

The needle in the middle, Clapton explained “is [Sansa's] link to the strength of her sister that she previously didn’t understand.”

Sansa and Arya were at odds end (figuratively and literally) with each other nearly the entire series. At the start of the series, then-Sansa was dreaming about marrying into the Baratheon Family while then-Arya had hopes of becoming a knight. Until the two were reunited at their home in the North in Season 8, they couldn't find common ground. But white walkers are quite the motivator for seeing eye-to-eye.

The detail doesn't only pay tribute to Arya's trusty sword, but also to Sansa's seamstress skills. “She’s always used a needle to explain what’s going on,” Clapton said in an interview with Vox.

Clapton also told Refinery29 that the chain itself represents Sansa’s overall imprisonment. Between being under Cersei Lannister's watch to being forced into not one, but two arranged marriages to Tyrian Lannister and Ramsay Bolton, it makes sense as to why the chain consumes her entire body.

All of Clapton's details are completely intentional with messages to explain a moment in the character's lives. In the earlier seasons of Game of Thrones, Sansa was an innocent teen who dreamed of tying the knot. Clapton chose a color palette for Sansa's costumes to reflect light, airy pastels while the Stark family was still intact.

However, as Little Finger took her away to wed the infuriating Ramsay Bolton, Sansa's style became much darker, heavier, and armor-like for Season 8. Sophie Turner who plays Sansa explained to Entertainment Weekly in February that the character would be be getting a thick leather ensemble.

“We liked the idea of it being very protective and she buttons herself up,” Turner said. “I wanted her to have a bit of armor and be a bit more warrior like. She’s like the warrior of Winterfell.”

Sansa may be bundled up in leather and ridden with large body jewelry, but when the true fight presents itself this season, she'll hardly need the armor.