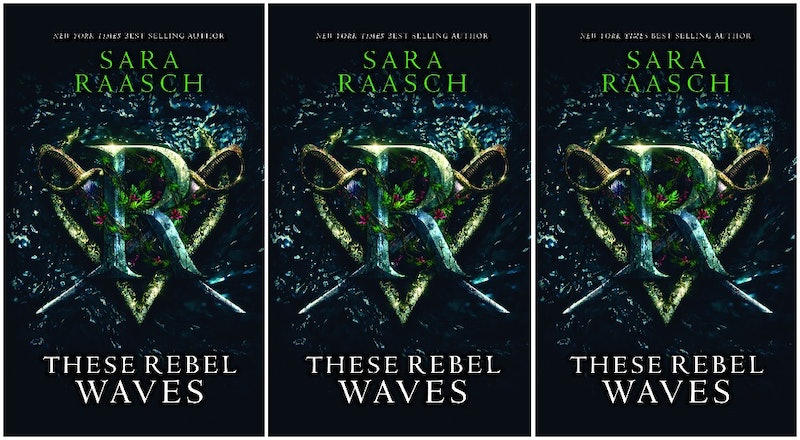 Pirates, forbidden magic, revolution, and most of all, fervent religious belief are all intertwined in Sara Raasch's upcoming fantasy novel These Rebel Waves. Even better? These Rebel Waves is only book one of the Snow Like Ashes author's new fantasy duology — and not only has Raasch given Bustle an exclusive look at book one's cover, but she has written a personal statement about why she decided to tackle the power of belief in her new series.

Inspired by the Spanish Inquisition, Raasch's duology takes place on the magic-rich island of Grace Loray, which five years ago overthrew its oppressor country, Argrid. Argrid is a country ruled by religion and has an inherent fear of Grace Loray's enchanted properties. So, when an Argridian delegate vanishes during peace talks, the country quickly places blame on Grace Loray's people and their magic.

Trapped in the middle of this reinvigorated war are three teenagers: There's Adeluna, a soldier who helped overthrew Argrid; Devereux, a pirate, or "Stream Raider," who deals in magic and becomes a target in the Argridian diplomat's abduction; and Benat, the Crown Prince of Argrid and a heretic, who is obsessed with Grace Loray's magic.

The only bad news here is we'll have to wait until July 3, 2018 for Balzer + Bray's release of These Rebel Waves. But don't worry, we have an exclusive reveal of its stunning cover to tide (pun totally intended) you over.

Plus, read further for Raasch's own personal statement on her motivation for writing These Rebel Waves:

"In middle school, one of my friends went to a summer camp that taught her how to sneak into North Korea.

My high school history teacher made our grade dependent on how many people we could convert to Christianity. At a volleyball game, another of my friends kissed a boy, and the instructors locked her in a closet until they decided “what to do with her.” In lieu of Spanish class one day, my teacher packed every girl into one classroom, while a male teacher stomped on a white rose and declared that that was us if we had sex before marriage.

Looking back now, I see the misogyny, abuse, and manipulation in that behavior. But at the time? I believed.

I believed so blindly in the faith of my formative years that none of those incidents (or the dozens more like them) raised any alarm bells. Of course we had to train children to break into dangerous regimes—the people there needed us. Of course teachers should shame girls for sexuality in any form—boys were so plagued by other responsibilities, they needed us to be modest. Of course schooling should have been secondary to saving lost souls—the war between God and the Devil raged daily, and while we were the chosen ones, the blessed few, the rest of the world ached in an absence of light. They needed us.

Religion played a role in my first published series, but my upcoming duology, These Rebel Waves, examines one particular and critical facet: belief. I know what it is to believe so deeply in a cause that the very idea of questioning its rightness is unfathomable. I know what it is to be told that certain groups are enemies, or lacking, or any number of adjectives that put them into a distinct us versus them mentality. I know what it is to devote yourself to a cause with soul-deep, all-consuming fervor so that you no longer exist outside of your belief. You do not question. You accept. Obey.

In These Rebel Waves Lu, Ben, and Vex all deal with the various stages of belief shifts. Lu has unfettered faith in the government she helped bring to power; Ben has to hide his disagreement with an oppressive and murderous dogma; Vex has been so beaten apart by institutions promising salvation that he has chosen not to believe in anything.

So much of our current world demands sides. Are you an us or are you a them? And if you pick the wrong side? How dare you, foolish gentle soul, pick left when you should have picked right? Up instead of down? Red instead of green?

Through These Rebel Waves, I hope to show the other side of belief. The gray side. The questioning, the analysis, the awareness. The magnificent mess of being wrong, and the horror of being right. The danger of assuming malicious intent from them or in assuming faultlessness from us and the perfect brilliance of being you.

So what do I believe now?

More like this
We’ve Entered The Hot Boy Reader Era
By Samantha Leach
Netflix Shut Down 'Bridgerton' S3 Rumours About A “Very Dark” Storyline
By Bustle
Jessica Simpson On The Time She Was Pursued By A Backstreet Boy & An *NSYNC Member
By The Editors
'That '90s Show' Star Callie Haverda Got Advice From Mila Kunis & Ashton Kutcher
By Brad Witter
Get Even More From Bustle — Sign Up For The Newsletter
From hair trends to relationship advice, our daily newsletter has everything you need to sound like a person who’s on TikTok, even if you aren’t.