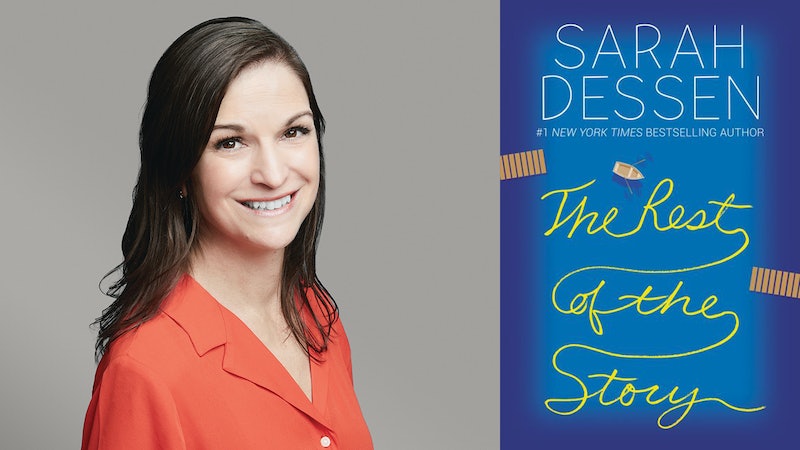 "When you lose someone, you often worry about forgetting them," author Sarah Dessen tells Bustle. "There aren't going to be any more memories, so you cling ever tighter the ones you have."

Grief and memory fuel her fourteenth novel, The Rest of the Story, out June 4, 2019 from Balzer + Bray. A #1 New York Times bestseller, Dessen is known for her summery tales about first love, first loss, and complex families, and her latest book certainly delivers on all three fronts. Below, check out an exclusive interview with Sarah Dessen about her new novel, plus find all the information you need to meet the author on tour this summer.

In The Rest of the Story, Dessen introduces readers to Emma Saylor, a teenager who doesn't remember much about her mom, who died when she was 12 years old. The only thing she recalls is the stories her mother told her about North Lake, where she grew up. Now, years later, Emma is going to the lake for herself — to stay with her mom's family, whom she hasn't visited since she was a little girl. And once she arrives, she realizes the community is far more divided than she thought: Her mom lived in the working class side of town, but her dad grew up in the wealthier Lake North resort. Emma feels torn between the two communities and two different parts of herself — and then she meets Roo, her best friend from her younger days. And he just might hold the key to her family history.

Below, get the scoop on Sarah Dessen's tour dates, and find out why she loves setting books in the dog days of summer:

Bustle: So many of your books are set during the summer — what is it that draws you to that season?

Sarah Dessen: I think it's from my own high school years. There was so much potential in a summer back then, and in those three months it seemed like anyone and anything could change. People you'd gone to school with since pre-K went away to camps or on trips and came back transformed, like you could just see the world on them. Maybe I wish my own summers still had that much possibility?

This novel tackles class in an interesting way: Emma Saylor is, in many ways, the girl from both sides of the tracks. What challenges will Emma Saylor face throughout the summer, as she feels herself torn in two directions and into two different people?

I tried to really tie everything in this book to family: how what you deal with there is the primer, often, for your interactions with the rest of the world. Emma Saylor's only known one parent for most life. When she goes to stay with her mom's relatives, she meets not just the people she comes from, but also experiences the world they life in, much different from her own. I live in a town bordered by a lot of rural areas: I had classmates in my own high school whose parents were deans, and some whose parents were farmers. Seeing the wide potential of things can help you find your own place, which is what Emma Saylor is struggling with as the novel begins.

There was so much potential in a summer back then, and in those three months it seemed like anyone and anything could change.

Many of your novels have dealt with grief. In this case, your protagonist's mother has been dead since long before the start of the novel. Despite the years that have passed, I imagine it's something Emma carries with her heavily. How will she deal with her grief as she comes to understand the family she never really knew?

When you lose someone, you often worry about forgetting them. There aren't going to be any more memories, so you cling ever tighter the ones you have. But what if, years later, you suddenly discover there are a whole bunch of stories about that person that you never heard? Every one adds the tapestry of a life, filling in details we wouldn't have otherwise. And Emma Saylor, given the chance, wants to hear them all. Stories are how she remembers.

This is your fourteenth book! Does it ever get easier writing them? What would be your advice for authors who aren't sure if they have another book in them?

NO, it doesn't! This one was the hardest yet, I swear. I started it after another book had imploded, so I was totally terrified. I had to just go on faith, which is really the only thing that the writing every book has had in common. The basic fact is, writing novels is hard. You have to really want it, and keep showing up, even on the bad days. If you're staring at the screen and feel like you have nothing, take a break. A walk. Run errands. Your writing mind is still at work, even when it feels like it's not. Something will come.

The Rest of the Story by Sarah Dessen is out June 4, 2019, and available for pre-order now.