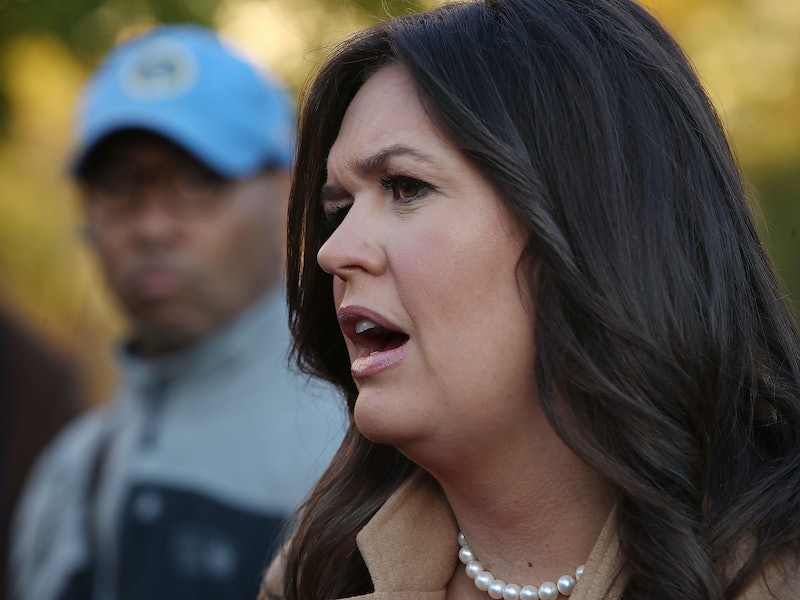 On Tuesday, at Politico's 6th yearly Women Rule Summit, Eliana Johnson posed a question for the White House press secretary: can women have it all? Sarah Huckabee Sanders told Johnson that she certainly thought they could. "I think it would be a true disservice to every woman in the country if we ever believed anything differently," Sanders said.

The press secretary mentioned her oldest daughter, who is 6 years old, and said, "I want my daughter to see that if she wants to do anything in this world, she's capable of doing that. She's capable of having and raising a family and doing that in a powerful way. But I also want her to know that if she wants to have a career, she can do that. But if she doesn't, that's OK, too."

Sanders added that it was "absolutely vital" to "empower women [and] help them believe they can have everything." Yet despite Sanders' optimism, studies paint a bleak picture for how little society helps set women up for success. For women from financially struggling backgrounds, especially women of color, "having it all" is hard to come by.

Considering the gender wage gap, how maternity leave is not guaranteed in America, and the financial vulnerability of single working moms in the country, the question of whether women can "have it all" is one without a simple answer. A 2014 study carried out by career analyst and the author of Getting Real About Having It All, Megan Dalla-Camina, showed that 40 percent of professional women said they were "hanging on by a thread." Similarly, a 2015 Pew Research study showed how work-life balance was more difficult for working mothers.

Johnson also asked Sanders about President Donald Trump's rhetoric toward female journalists and if the latter thought those comments were appropriate at all.

Over time, Trump has insulted several women in the news media, including one instance where he called veteran White House correspondent April Ryan "a loser." This is apart from Trump calling CNN reporter Abby Phillip's question about his acting attorney general, Matthew Whitaker, a "stupid question" as well as once commenting on the physical appearance of an Irish journalist.

Sanders seemed to evade Johnson's question. She said, "Look, the president’s had an equal number of contentious conversations with your male colleagues. The president is certainly not singling out women. And frankly, I think it's actually a detriment when we do that."

"Women wanted to be treated equally," she added, "and we have a president that certainly does that. He’s not going to hold back." Americans elected Trump "because he's a fighter," according to Sanders.

Still, Johnson pressed further. She asked again if Sanders agreed with the president's behavior as a professional. At this point, Sanders responded, "I don’t always find the behavior of the press to be appropriate, either."

Trump retaliates, Sanders said. "I think that the president is somebody who’s a fighter," she told Johnson. "When he gets hit, he always hits back." But while Sanders may have been satisfied with her own answer, the audience applauded Johnson for not backing down from her original question about Trump's attitude toward women in media.