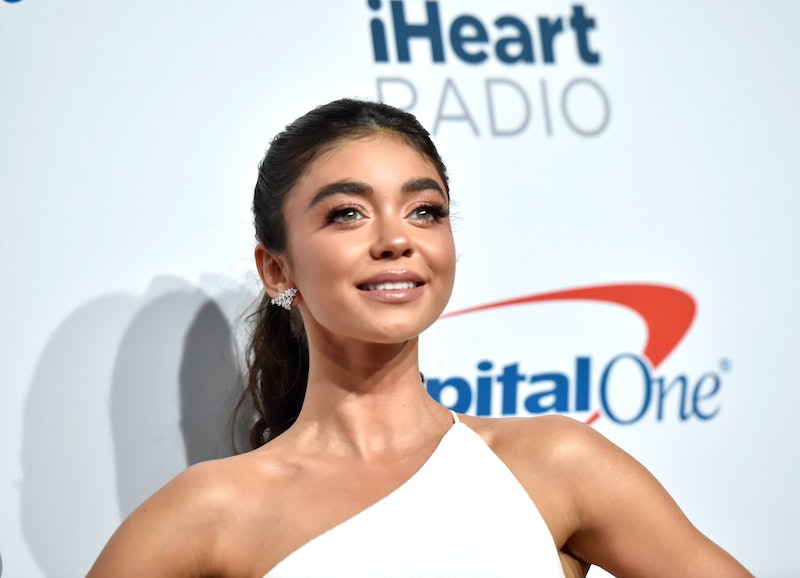 Following a SELF profile in which she discussed her mental health struggles stemming from managing her chronic illness, actor Sarah Hyland talked about having suicidal thoughts on The Ellen DeGeneres Show, Entertainment Tonight reports. The 28-year-old Modern Family star opened up during her Jan. 4 appearance on Ellen, telling DeGeneres she was “very, very, very close” to death by suicide.

“[A]fter 26, 27 years of just always being sick and being in chronic pain every single day and you don’t know when you’re going to have the next good day, it’s really, really hard,” Hyland told DeGeneres, according to Entertainment Tonight. "I would write letters in my head to loved ones of why I did it and my reasoning behind it; how it was nobody’s fault. I didn’t want to write it down on paper because I didn’t want anybody to find it. That’s how serious I was.”

"Reaching out to friends is important," April Foreman, a psychologist and board member of American Association of Suicidology, tells Bustle. "They can help you validate your depression and need for care, check in on you, and be with you when you need it."

More than 41,000 people die by suicide every year, according to the National Alliance on Mental Illness (NAMI). Suicidal thoughts can affect people regardless of their age, gender, or background, says NAMI, but feelings of shame and stigma keep people from talking openly about their suicidal feelings or experiences with loved ones dying by suicide.

Mental health stigma has made it nearly impossible to talk about death by suicide because people often feel afraid or ashamed to even mention it. And that stigma can have harmful consequences, according to Mayo Clinic. People sometimes don’t seek the treatment they need, people might not understand what their loves ones are going through, and health insurance often doesn’t adequately cover mental health needs, says Mayo Clinic.

That’s why it’s such a big deal that Sarah Hyland talked about her suicidal thoughts with a friend as a first step in getting help. When mental health and death by suicide become a part of everyday conversation, it’s a gamechanger for ending the stigma surrounding mental health. And that makes it feel safer to not keep those feelings inside anymore.

In Hyland's case in particular, Foreman notes, kidney disease and related health issues, as Hyland went through, can be a factor in feeling suicidal unto itself. "This is VERY common for people in need of, and getting kidney transplants," she tells Bustle. "It is important to have a suicide safety plan, and for family and friends to be on that plan and know how to help if someone with kidney disease or renal failure becomes suicidal."

If a friend does feel safe enough to tell you they are thinking about death by suicide, Melinda R. Paige, Ph.D., LPC, NCC, CPCS, assistant professor in clinical mental health counseling at Argosy University in Atlanta, previously told Bustle to avoid the urge to tell your friend you understand how they feel because it’s impossible to truly understand the pain your friend might be going through. No matter how well you know your friend, Paige said, it’s important to respect the differences between your two experiences.

Instead, Paige recommended, it’s helpful to show empathy by saying something like, “I’m so glad you told me,” because that acknowledges the pain they’re going through. The most helpful thing that was said to me when I was at my lowest was when my therapist told me, “I’m so sorry you’re hurting right now.” Paige said it can be a relief to have someone acknowledge their suffering, and reaching out to friends can be invaluable as a first step in getting help.