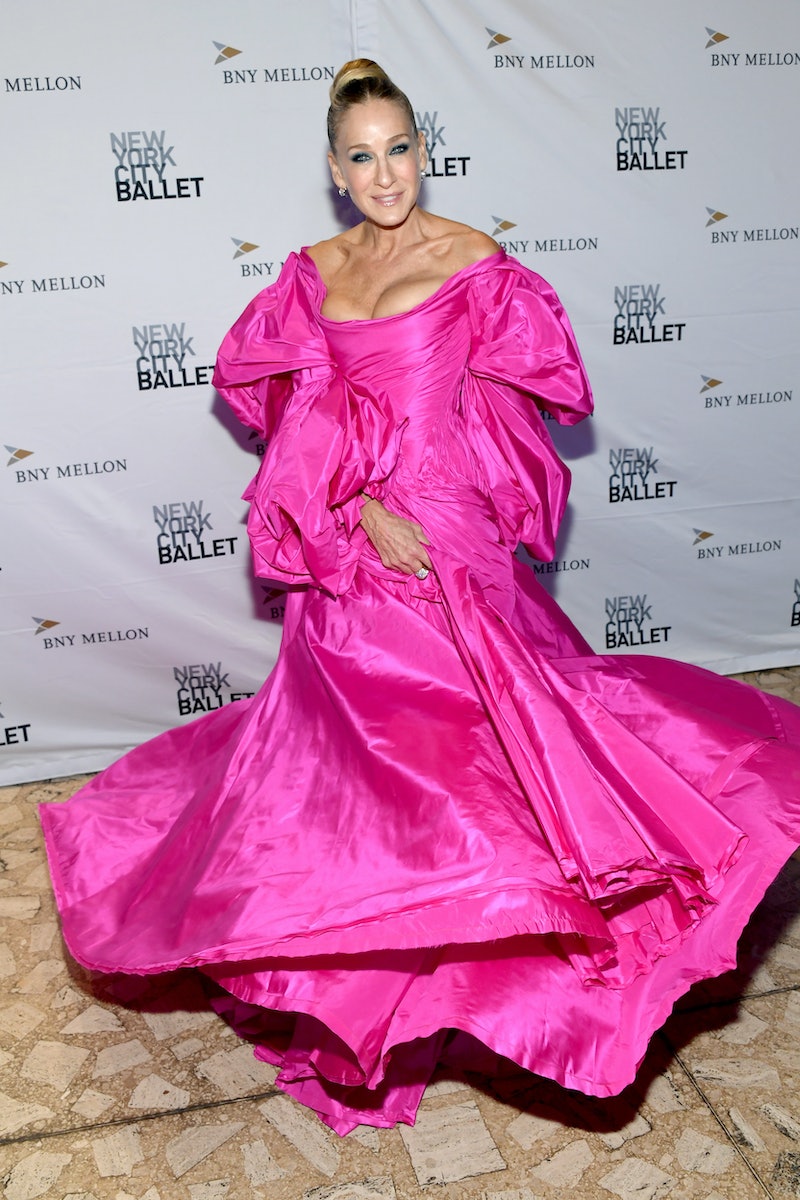 It may be 15 years since Sex and the City ended, but the iconic fashion moments from the show still live on. Sarah Jessica Parker just wore mismatched shoes, channeling an infamous Carrie Bradshaw moment. Parker recreated the show's pivotal shoe moment while attending New York City Ballet’s Fall Gala on Sept. 26. The actress stepped onto the red carpet in a voluminous Zac Posen fuchsia gown, which was complete with '80s-like puff sleeves and a trailing train.

Before heading into the gala, Parker lifted her skirt to reveal two mismatched strappy heels. One was the same hot pink color as the dress and featured a rhinestone buckle. The other was a contrasting chartreuse hue. Both of the sandals were from Parker's shoe line, SJP by Sarah Jessica Parker, but they weren't selected from two different pairs of shoes. Instead they were designed as mismatched.

The SJP heels are called Rogue, because that's exactly what they are. They defy style rules. Rogue will be available to purchase in spring 2020, and you can sign up for the waitlist on the SJP by Sarah Jessica Parker website.

In case you haven't watched Season 3 of Sex and the City recently, the iconic style moment happened during a Los Angeles trip where Carrie stepped out in a mismatched pair of Christian Louboutin shoes. One shoe was a metallic red and the other was a bright teal. As Carrie walked through L.A. in her contrasting shoes, fans were left wondering whether the move was intentional or a costume design mistake. As Vogue said of the moment, though Carrie was known for her eclectic sense of fashion, but the mismatched shoes were bold even for her.

In June 2019, Parker settled the style debate by commenting on an Instagram post from @EveryOutfitOnSATC. The account documented the best outfits worn on the HBO series, and the polarizing shoe look eventually hit followers' timelines.

Parker confirmed that the mismatched shoes were an intentional styling choice, done in collaboration with SATC's costume designer Patricia Field.

"We had two pairs of what I believe are [Christian Louboutin] strappy sandals," Parker said in the comments. "Pat and I chose to do one of each. Perhaps both were so delicious in color and seemed in harmony with the dress, but also simply because we loved doing one of each."

Field also made an appearance in the comments, lending her side of the story. "[Sarah Jessica Parker] and I decided to use one of each because we could not choose which one was best and they were both perfect with the dress."

While @EveryOutfitOnSATC might have finally put the Great Shoe Debate to rest, it turns out the account is intimately tied to the Rogue mismatched heels. According to the brand's site, a portion of Rogue's proceeds will be going to charity in partnership with one of the brand's favorite Instagram accounts — @EveryOutfitOnSATC. SJP by Sarah Jessica Parker did not announce which charity it will be donating to, but more information is coming soon.

Carrie's mismatched heels have been making waves for over a decade, and now you will be able to copy the look come spring.