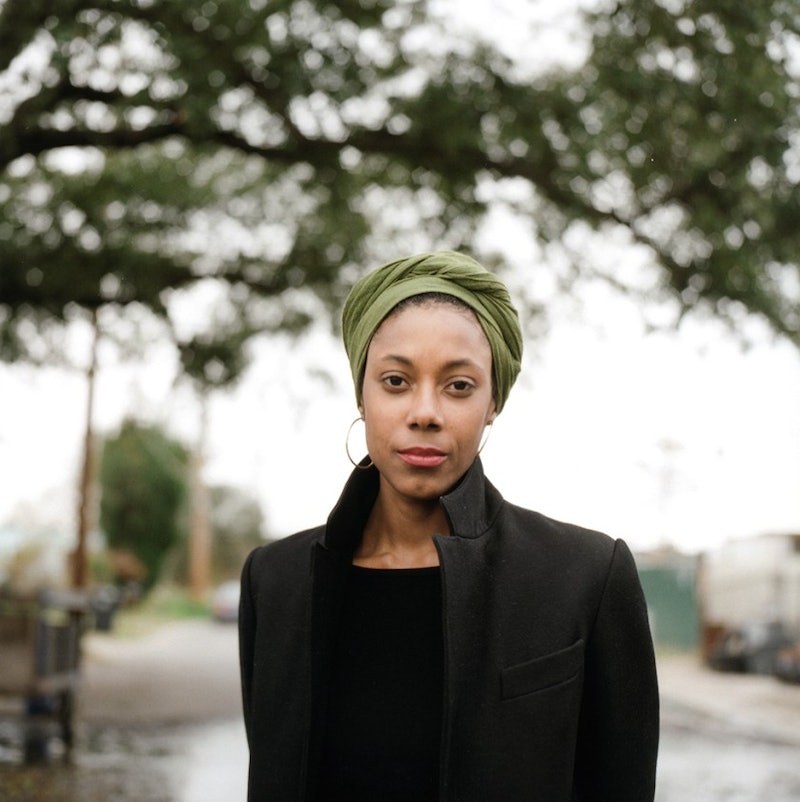 "I think everyone has a yellow house, really,” says author Sarah M. Broom, of her debut memoir, The Yellow House. Meticulously researched, The Yellow House tells the story of a section of New Orleans that many readers will not be familiar with, New Orleans East, and specifically, the yellow shotgun house the author grew up in. "I wanted people to think about home, to think about the places we’re wedded to that we have these strange relationships with," Broom tells Bustle. "I wanted people to think about family and what it means to come from a place that everyone thinks they know. I hope it connects. I hope people find whatever their own yellow house is and ponder that."

Stemming from an eponymous New Yorker essay published in 2015, The Yellow House transports readers to 4121 Wilson Avenue, New Orleans, where Broom’s mother purchased the yellow house in 196 — although, as Broom learned researching her memoir, it wasn’t always yellow. Generations of Brooms would live and grow up there. The author is the youngest of twelve siblings, all born between the 1940s and the 1970s. In a way, Broom describes, this memoir was written for them. "I have nearly 50 nieces and nephews who are young people in the world, so I just think about having this history of New Orleans written down," Broom says. "Honestly, those are the people who I need to make very proud."

The Yellow House reads like the best family lore, the kind passed down through generations — the relationships, the strife, the losses and victories. In fact, Broom had to research nearly all of it. She returned to New Orleans again and again, drove to her father’s hometown of Raceland, Louisiana, combed through library and church archives, and compiled hundreds of hours of audio recorded interviews with her family members and former neighbors.

"I’m a research fool," says Broom. "I love research, I love archives, I love libraries. Most of what you see in [the first section of The Yellow House] — which is the world before me, what the world was like before I was born — none of that detail existed. For instance, I knew that my grandmother didn’t know her mother, but that was the extent of the family lore. My grandmother was not really a person, she was all these small facts. I had to craft this sense of her from all of the evidence I found. I knew that my mother was married once before and obviously had children with someone named Webb, but I didn’t know anything beyond that. I only had the skeletal frames of stories."

"My siblings had completely different relationships to this place, their sense of the house is so different from mine."

The story that surprised Broom the most? The fact that the indelible yellow house of her memory wasn’t always yellow. "I sat [my sister Deborah] down and said: 'Oh, you know, I want to interview you about what life was like in the yellow house.' And she said: 'What yellow house? The house I knew was green!'"

"I discovered this whole layer of time when the house I know so well was a different house — and it was a green house," Broom continues. "It just helped me understand all the layers. My siblings had completely different relationships to this place, their sense of the house is so different from mine. It gave me a bit more of a sense of the complexity.”

Much of that complexity involves Broom’s feelings — and the feelings of her mother, her siblings — about their home. They were proud of their home: their ownership of it, the history it witnessed, the way Broom’s mother thoughtfully arranged and cared for the items (and people) inside it’s walls. But Broom also writes that the house was structurally unsound, updated by careless builders, and also caused her family so much shame as well: the Broom children, for example, did not ever have friends over, and often had their friends’ parents drop them off on the corner, out of view of the yellow house.

"I want to be able to say: I’m from New Orleans, and it’s a great city, and I know how to second line, but also, there’s all of this dysfunction that we need to somehow resolve."

"I was agitated by it. I couldn’t figure out how I belonged to something — how I, in a way, owned something — that I felt didn’t represent me fully," says Broom. "I had grown up as a kid hiding a house, and the thing about shame is that it makes you feel so helpless. This kind of agitation I feel about the house, it’s the same agitation I feel in my returns and departures to New Orleans. It’s the same agitation I feel, frankly, about being American: feeling that there are things we do very well, and that there are things I’m absolutely embarrassed of that are horrifying.”

Horrifying, for example, that most of the people Broom grew up with, are, as she writes, now in jail or under the ground.

"Ultimately in the book I’m trying to get at the ways in which we can have stories that are devoid of this nuance, which gives the texture of a place. I want to be able to say: I’m from New Orleans, and it’s a great city, and I know how to second line, but also, there’s all of this dysfunction that we need to somehow resolve."

The Yellow House isn’t just the story of Broom’s family and their relationship to this little, yellow shotgun house. It’s also a story of New Orleans East — a kind of overlooked area within New Orleans’ city limits, that, as Broom describes in her memoir, is so overlooked it doesn’t even garner the post-Katrina disaster tourism that the Lower 9th Ward does, despite the fact that it was just as devastated by the storm and its aftermath.

"Why isn’t it on any maps?" Broom says, of New Orleans East. "Why is it not talked about? Why is it not included? It was interesting to think about the city of New Orleans in all of its vastness and know that [the East] wasn’t on the mouths of people."

"In a way the book is an autobiography of that place. I think about the houses we live in now and how little history we have; we’re making that history in these houses."

Broom’s memoir has been described as "more than a Katrina novel"; in fact, it reads more like an anti-Katrina memoir: Broom resurrects the landscape, the homes, and the history that Hurricane Katrina razed.

"The yellow house was such a specific place," she says. "Not all places are alike — maybe not everybody believes that, but I believe that. And that house contained so much history. That’s sort of what made it special. In a way the book is an autobiography of that place. I think about the houses we live in now and how little history we have; we’re making that history in these houses. I think I’m still wrangling with the idea of home and feeling that somehow there is a kind of existential displacement that I always feel."

But recently, in an almost too-perfect twist of fate, Broom herself has become the proud owner of a little, 650-square-foot yellow house of her own — one with its own uniquely New Orleanian story and history that the author will undoubtedly add to over time. "It’s a little shotgun house and it’s very yellow — yellower than the original yellow house," Broom says. "I never thought I wanted a yellow house, ever. But it’s so tiny, it just contains everything you need and nothing more, and it has a great history too. I’m really sort of in love with this yellow house. It’s quickly becoming one of my favorite places in the world to be."