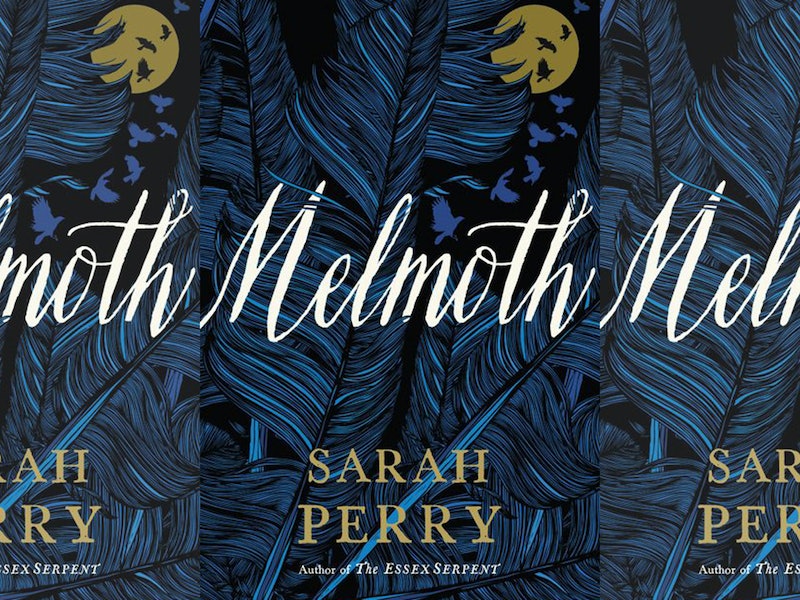 You, like me, have probably had moments where, standing at the crossroads of a difficult decision, you made the wrong turn and picked the easier path, despite its consequences. What if, in those moments of weakness, there was someone standing on the road with you, watching? Not a guardian angel to guide you, or a fatherly Santa Claus character to judge you, but a dark robed figure with bare and bloody feet, there only to witness your sins. That is the kind of watcher at the center — or rather, lingering in every dark corner — of Sarah Perry’s new novel, Melmoth. A chilling but surprisingly hopeful story about loneliness, despair, guilt, and consequence, Melmoth forces you to look at yourself and the people around you and ask a difficult question: How have your actions and, perhaps more importantly, your inaction helped keep the wheel of injustice turning?

Helen Franklin — described as "forty-two, neither short nor tall, her hair neither dark for fair; on her feet, boots which serve from November to March, and her mother's steel watch on her wrist" — is an Englishwoman living a quiet, mostly solitary life as a translator in Prague. That is, until Karel, one of her only companions, comes to her with the story of Melmoth the Witness, a dark legend he learned about after receiving a mysterious letter from a dead man.

Melmoth: A Novel by Sarah Perry, $27.99, Amazon or Indiebound

According to the ancient tale, Melmoth was among the women who came to Christ’s tomb and witnessed him rise from the dead, and the only one to later deny what she saw. She was punished for her sin, cursed to walk the earth alone until the return of Christ at the Last Judgement. "But what you must remember is this: that she is lonely, with an eternal loneliness which will end only when our world ends, and she receives her pardon,” writes Perry about the myth and the cursed woman at its center. “So she comes to those at the lowest ebb of life, and those she chooses feel her eyes on them. Then they look up — they see her watching — and she holds out her arms and says: Take my hand! I've been so lonely!"

It is clear that Karel has been changed — physically, mentally, and emotionally — by the knowledge of this legend, but that doesn’t stop him from handing it and the letter from which he learned of it to Helen. She takes it and, soon enough, she too is consumed by the story of Melmoth and the dark memories from her past it drudges up. Then, Karel disappears, leaving nothing more than his heartbroken wife and his extensive research on Melmoth behind. The more Helen reads about the Witness — in a document about a German boy in Czechoslovakia whose choices sent his Jewish neighbors to a concentration camp during World War II, in a journal detailing the actions of an Ottoman official during the Armenian Genocide, in other letters and witness accounts — the harder it is to ignore the something or someone lurking in the darkness of her own life. Is it her own guilt, fear, and paranoia that is making Helen see the shadowy figure, the blue-eyed jackdaws, and the ghosts of the past, her own and others? Or is Melmoth more than just a story?

In a passage about the sensation of knowing Melmoth is there watching, Perry offers the perfect description for the way it feels to read her book: "a kind of frightened longing, like a man who sees a lover he has hopelessly longed for, and in his lover's hands a noose." It's a heartbreaking novel, one filled with fear and regret and horror, one that forces readers to confront some mankind's greatest atrocities, past and present. And yet, its gorgeous lyricism and stunning prose make it difficult not to fall deeply for Melmoth, just as its fascinating characters and nested storytelling make it impossible not to get pulled into its darkness.

Like the best gothic works, Melmoth puts readers in the thick of that darkness with little more than a flashlight, and asks you to make out what you can of the shadows. Throughout the novel, the narrator implores readers to "look," to see things even characters in the novel either cannot or are too afraid to see. When Helen finds herself unable to confront the presence of Melmoth, it is the readers who are left with the task. "And since she will not look, you must — there, beyond the railing — no, a little further still: between the parked car and this — wait, and grow accustomed to the dark; and yes, there you have it, do you not," the narrator asks. But what is it exactly that you see in Melmoth?

A spine-tingling story about despair and regret, Melmoth delivers a clear warning to readers: do not look away, do not close your eyes. Not because there is a monster lurking under the bed, or a ghost hiding in the closet. Because injustice is all around, and, as Perry writes, "if there is only us, we must do what Melmoth would do: see what must be seen — bear witness to what must not be forgotten."