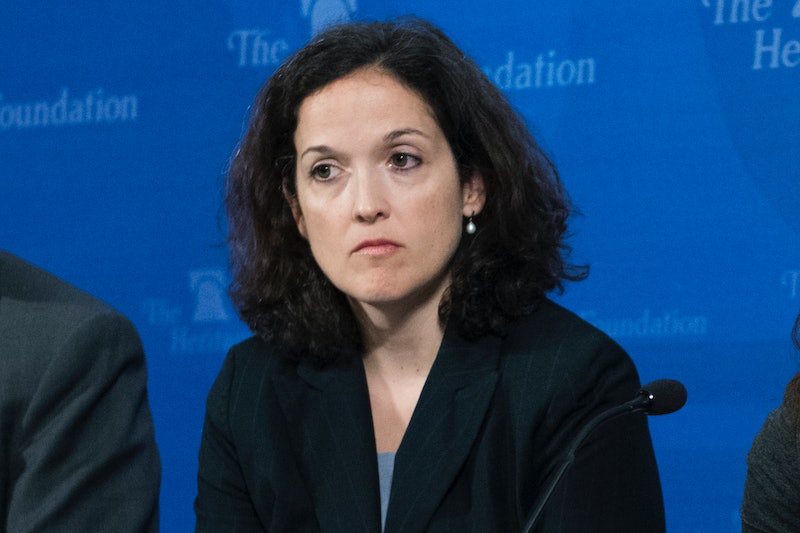 President Trump has confirmed more than 150 lifetime federal judges across the United States since being sworn into office in 2016. Pro-choice advocates say most of his nominees are well-known for their opposition to abortion access, and that Trump's nominating strategy is part of a larger anti-choice plan to land an abortion ban in front of the Supreme Court — and overturn Roe v. Wade. On Dec. 4, the Senate will vote to confirm another Trump nominee with a reputation for opposing abortion, Sarah Pitlyk, to the U.S. District Court for the Eastern District of Missouri.

Pitlyk is a Missouri lawyer who has reportedly expressed anti-choice views throughout her career. She was part of the St. Louis Lawyers for Life from 2017 to 2018, and is a special counsel at the Thomas More Society, an anti-choice law firm that advocates for religious freedom. In 2015, she helped defend the activist who created heavily doctored videos accusing Planned Parenthood of fetal tissue trafficking, according to The Daily Beast. Even after the videos were debunked, Pitlyk continued to describe Planned Parenthood's work as “baby parts trafficking," The Daily Beast reported.

Pitlyk also clerked for Supreme Court Justice Brett Kavanaugh, and came to his defense when he was accused of sexual misconduct by multiple women during his Supreme Court confirmation process. (Kavanaugh has denied all allegations.) She also co-authored an amicus brief on behalf of Catholic theologians and ethicists that supported Hobby Lobby's right to deny employees health coverage of contraception based on the owners' religious views. She also argued on behalf of her clients that using contraception is "evil" and a "grave moral wrong."

In another brief, Pitlyk argued on behalf of a number of anti-choice organizations that oppose gestational surrogacy, when a person carries a pregnancy for someone else. “Surrogacy diminishes respect for motherhood and the unique mother-child bond, encourages exploitation of women, and it commodifies pregnancy and children,” Pitlyk said, according to the Thomas More Society website. “Surrogacy also weakens society’s natural abhorrence of eugenic abortion.”

Also for The Thomas More Society, Pitlyk argued in support of Iowa's six-week abortion ban, which was later ruled unconstitutional. In another abortion case, she argued that it's a “scientific fact” that “human life begins at the moment when a human sperm fertilizes a human egg,” according to HuffPost, though there's no science that conclusively supports that claim.

In a custody case related to in vitro fertilization and frozen embryos, Pitlyk also expressed views that pro-choice advocates say indicate that she might oppose the treatment entirely. She said the trial court’s judgment, which granted custody of frozen embryos to the father rather than to her client, the mother, “treated the embryonic children as inanimate objects, not human beings with the same interests as other unborn children,” The Daily Beast reported. She said her client's children would also “have to navigate the murky psychological waters of knowing that they had similarly situated siblings who died at the hand of their father.”

Planned Parenthood Action Fund says Pitlyk has "spent her career trying to roll back our sexual and reproductive health and rights." The nonpartisan American Bar Association also opposes her confirmation, writing in a letter to Sens. Lindsey Graham and Dianne Feinstein, "Ms. Pitlyk does not meet the minimum professional competence standard necessary to perform the responsibilities required by the high office of a federal district court judge."

Senate Majority Leader Mitch McConnell has scheduled a confirmation vote for Pitlyk for Dec. 4 or 5, according to HuffPost. In an October hearing, Democratic Sen. Mazie Hirono questioned Pitlyk on some of her "strongly held views," to which Pitlyk responded, “My personal views have no role in my place as a judge."

Sen. Tammy Duckworth, a Democrat from Illinois, also wrote a letter to all 99 of her Senate colleagues that urged them to vote against Pitlyk's confirmation. “As a mother who struggled with infertility for years and required IVF to start my family, I would be one of the many Americans who could never enter Ms. Pitlyk’s courtroom with any reasonable expectation that my case would be adjudicated in a fair and impartial manner,” Duckworth wrote.

The only Republican senator who currently plans to vote against Pitlyk is Maine Sen. Susan Collins, who wrote in a statement that she questions, "given [Pitlyk's] pattern of strident advocacy, whether she could put aside her personal views," HuffPost reported. Given that Pitlyk has the votes to be confirmed, it's anticipated that she will become the latest anti-choice Trump nominee to hold a federal bench seat.

More like this
Prince William Condemns “Unacceptable” Comments Made To A Black Guest At Buckingham Palace
By Shahed Ezaydi
Amanda Gorman Shared A Powerful Message On Meghan Markle’s Penultimate Podcast
By Darshita Goyal
The David Beckham Qatar Controversy, Explained
By Sophie McEvoy
Here's How To Support Jewish People Amid Rising Antisemitism
By Hannah Orenstein
Get Even More From Bustle — Sign Up For The Newsletter