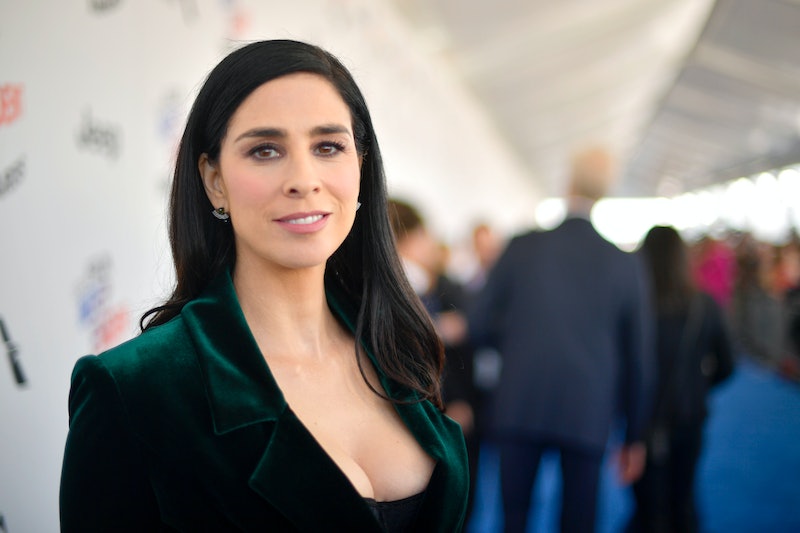 After going to the radiologist for what should’ve been a routine exam, Sarah Silverman’s bad mammogram experience has now gone viral after the comedian posted the details on Instagram, People reports. “I had a sh*tty time at my mammogram appt [sic] today,” Silverman said in her Instagram post. “[The radiologist] opened my gown and put gel on my breasts and smeared it around with his bare hands.”

Silverman goes on to explain in her post how the radiologist then tried to talk to her about her chest X-ray with both of her breasts exposed. And when he performed her ultrasound, Silverman said, “when he glides the ultrasound wand thing over my breasts, he drags his fingers on them.” When Silverman asked the radiologist if it was necessary for him to touch her breasts with his ungloved hands during the exam, the radiologist told her “no,” but he does it for balance.

In both instances, the comedian spoke up for herself and told the radiologist that she was not OK with what was happening. Silverman said she didn't think the radiologist was attempting to harass her in any way, but that every medical provider should be aware of the power dynamics at play in the patient-caregiver relationship. “I truly don’t think he was getting off on it,” Silverman said in her post. “But it is his job to be aware that this is vulnerable for a woman.”

Silverman’s Instagram post has racked up more than a hundred thousand likes since she published it on Feb. 6, starting an important conversation about a patient’s rights while in the exam room and how important it is to speak up if you think something’s not OK. If you’re not sure how to protect yourself from sexual harassment or assault while receiving medical care, here are a few important things to know.

First of all, if you are ever harassed or assaulted while receiving medical care (or in any situation, for that matter), it is not your fault. And presenting you with preventative measures is in no way placing the blame or burden on survivors. The only people who are responsible for harassment or assault are the perpetrators. But arming yourself with protective measures might help you escape a bad situation. If you’re unable to use these measures, and harassment or assault occurs, it is still not your fault.

Amiel tells Bustle reports of sexual harassment and assault often share a commonality: the patient was alone with the provider during the exam. You can request another health care provider — such as a medical assistant, nurse, or patient care technician — be present during an exam, says Amiel, or you can bring a friend or family member. During more intimate procedures, such as OB/GYN visits, Amiel says it’s routine for providers to pull in another staff member to supervise. If you’re not comfortable receiving care from a specific provider, Amiel says it’s your right as a patient to refuse care from that provider.

While the burden shouldn’t be on you to know what’s right from wrong in an exam room, it is helpful to arm yourself with information. Know exactly what the exam or procedure you’re about to get should (and should not) entail so you can speak up if something doesn’t seem right. That’s how Silverman was able to advocate for herself during her exam — she knew that her mammogram experience wasn’t the norm.

When a mammogram ultrasound is performed, "the transducer is generally the only thing that touches the woman's breast,” Richard Reitherman, medical director of breast imaging at MemorialCare Breast Center at Orange Coast Medical Center in Fountain Valley, California, told Women’s Health. Dr. Reitherman also told Women’s Health that it was unusual for both of Silverman’s breasts to be exposed; usually the technologist or radiologist will uncover only the breast the ultrasound is being performed on. And Silverman shouldn’t have been alone with a male radiologist, says Dr. Reitherman. Standard practice is for a female radiologist to do breast ultrasounds or for a female to supervise a male radiologist who’s doing a breast ultrasound, according to Dr. Reitherman.

However, being informed is not as easy as it sounds. Medical gaslighting is an all-too common problem, according to Health, and it happens when medical professionals try to downplay or blow off your symptoms or basically tell you you’re not feeling what you know you’re feeling. And the scary truth is that there’s a distinct gender bias to medical gaslighting, leaving women across the country undertreated or misdiagnosed, says Health. And even though you have the right to choose your own provider, not everyone has the privilege of choice. Sometimes you’re limited by insurance networks, location, transportation, or simply time.

But the bottom line is that “sexual harassment or assault when receiving medical care is absolutely inappropriate and illegal,” Amiel tells Bustle. “You can report sexual or physical assault to the local police, you can report the provider to their state licensing board, where they may have their license revoked or receive disciplinary action, and you can also report this directly with the facility. Many health care facilities have a process for documenting and reporting complaints of any provider misconduct.”

However you decided to stand up for yourself, Silverman says just advocate for yourself. “All this to say speak up,” Silverman said in her post. “Trust that thing in your gut that tells you this sh*t ain’t right.”