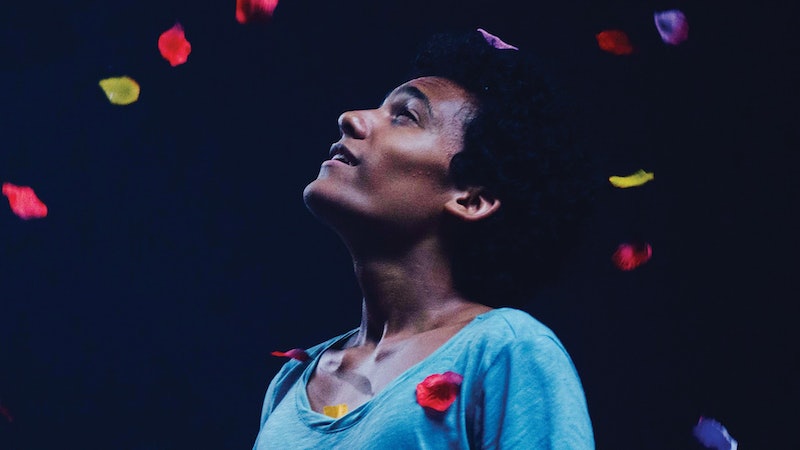 The term "safe space" is used so often these days, and sometimes with sarcasm or malice, that it can be easy to forget how essential and necessary they can be for those suffering from discrimination. Thankfully, in the new film Saturday Church, which was runner-up for the Audience Award at this year's Tribeca Film Festival, a vital safe haven for LGBTQ youth takes center stage. The striking coming-of-age musical, written and directed by Damon Cardasis and starring Luka Kain as a teen named Ulysses, is not only a moving tale, but a much-needed reminder of how important spaces where people can be themselves truly are.

In the film, Ulysses, a gay teen exploring his identity, finds his life thrown into turmoil when his father dies and his homophobic aunt steps in to help take care of him and his younger brother. He ends up finding a new family at "Saturday Church" — a weekly program for LGBTQ youth in need of a meal and a place to just be themselves. And while his home life doesn't initially reach the atrocities that many of his new friends have faced, they welcome him when he needs to be welcomed. "There's a safe space for them," Kain says, speaking recently via phone. "They can eventually find a family even if the one they're with now can't accept them, or they feel that they can't come out."

Kain adds that he hopes that this film will reach young audience members in similar situations as Ulysses who need this message and a place like Saturday Church. The movie's program is based on a real one in New York City's West Village, where Cardasis volunteered for a few months. He praises the program for giving those in need meals, job training, housing and more; he even recalls one time witnessing a mini vogueing competition, which inspired the cathartic musical numbers that appear in Saturday Church. "Some of these kids have gone through sort of horrific moments in their life," he recalls, "and when they're performing and they're dancing it's sort of like utter joy."

The music in the film works to give Ulysses an added escape, as well. Fantasy in and of itself is a kind of safe space that you create for yourself, and for Ulysses, since music is something that he shared with his late father, it's something he clings to after his dad's death. "I had always had the idea," Cardasis says, "that his home life was sort of drab and depressing and bleak and he would use glimpses of beauty in his life sort of bleed into fantasy."

In order to cast the film, Cardasis used traditional search methods, but also reached out to different houses in the ballroom community. "The most important thing was that the film felt authentic and not exploitative or voyeuristic at all," he explains. "There's so many talented diverse actors out there you don't have to pull from the same pool." The movie features almost exclusively people of color, as well as many LGBTQ actors, and for many of the cast members, this was their first time acting.

For Kain, who was cast through traditional channels, the story has a personal connection. "I have a sister who's trans," he says, "who actually came out right after the film finished filming. I really hope that I can connect to her and have this resonate with her. That would be one of my greatest achievements, in my opinion."

Both actor and director hope that the movie's depiction of church, too, shines a light on what the institution can be at its best. Sadly, church is not always a welcoming space, especially for the LGBTQ community or anyone with different views or values, but as the film shows, it can, and should, be a sanctuary and a safe haven. "My mother is an Episcopal Priest and she has a Parish in the South Bronx," Cardasis says, "and I'm gay — and so religion and sexuality are things that have always been part of my life, but in a different way than I think most people because my mother is very liberal."

"Obviously, I know that religion is a major cause of sort of despair for a lot of LGBTQ youth," he continues, "and a lot of people have been on the receiving end of abuse because of religion." Seeing this behavior firsthand was one of the reasons the filmmaker decided to make Saturday Church. "These kids that were living on the streets," Cardasis explains. "A lot of them had been kicked out of religious households because of their sexuality and yet there was another church that was taking care of them and not judging them because of their sexuality."

Showing an accepting church on screen is important not only for those who need those resources, but for those who are able to contribute money or time to programs and safe spaces like the ones in Saturday Church, many of which are "barely scraping by," according to Cardasis. Without these programs, people suffer; Saturday Church shows us what happens in the absence of this kind of safe space, when Ulysses is kicked out of his house in the middle of the week and is left on his own until he can return to church.

And while Ulysses' time in the program helps, the movie doesn't provide a specific "answer" or "fix" to his life problems, because that's not realistic. "The film doesn't necessarily show that Ulysses has accepted himself and will live happily ever after," Kain says, "but it does show that he has a sense of identity and that will get him through the hard times — because there will inevitably be many more, I'm sure."

Without giving anything away, Saturday Church does have a hopeful ending — and a pretty dazzling one at that. The movie may not be a fantasy, but it does provide plenty of powerful inspiration.

More like this
Christina Perri Had No Idea Her 'Twilight' Song Is On YouTube's Top 100 Chart
By Radhika Menon
How Director Quinn Shephard Turned Dylan O’Brien Into A “Viral Weed Blogger”
By Samantha Leach
Angourie Rice Unleashes Her Inner Control Freak
By Jessica Derschowitz
At 14, D'Arcy Carden Was Sneaking Out To Parties & Crying Over Kurt Cobain
By Ivana Rihter
Get Even More From Bustle — Sign Up For The Newsletter