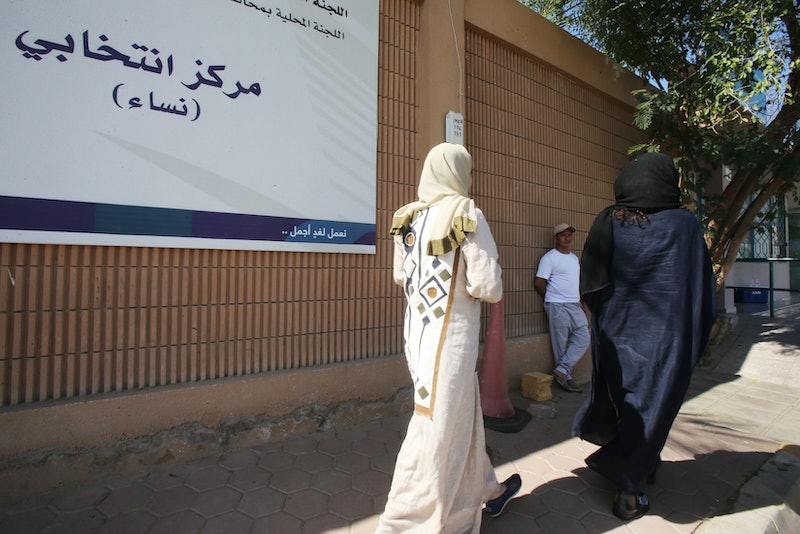 Saudi Arabia has reportedly renewed its crackdown on advocates and intellectuals, according to the Saudi human rights organization, ALQST. The organization announced on Friday that Saudi Arabia arrested two U.S. citizens supporting women's rights activists in the country, along with several other individuals.

As Vox reported, the two dual Saudi Arabia-U.S. citizens arrested in the crackdown are Bader al-Ibrahim and Salah al-Haidar. The outlet indicated that Ibrahim is a writer and doctor and Haidar is a journalist. Notably, Haidar is also the son of Aziza al Yousef, a Saudi feminist activist currently on trial in the country for her women's rights advocacy, theWashington Post reported.

The Washington Post added that a U.S. State Department spokesperson confirmed that two Americans had been arrested in Saudi Arabia, and that the United States has “already engaged the Saudi government” regarding the issue. Bustle reached out to the State Department for further comment on the matter.

In addition to the two U.S. citizens, Vox revealed that six other Saudi nationals were also detained, including five men and a pregnant woman. The outlet added that all of the arrested individuals reportedly have links to Yousef.

As NBC News described, those who were arrested are not at the forefront of activism in Saudi Arabia, but have instead voiced their support for reform initiatives around women's rights and other issues. Lynn Maalouf, Amnesty International’s director of research for the Middle East, told the New York Times that their arrest could signal that Saudi Arabia is increasingly cracking down on dissent, regardless of international criticisms. “By targeting them, they are signaling to their entire people that there will be zero tolerance of any form of criticism, let alone questioning, of the state’s authoritarian practices," she said to the paper.

Maalouf further condemned the arrests in a statement to the Washington Post. "The Saudi Arabian authorities are shamelessly targeting those citizens who are part and parcel of the society’s vibrant intellectual, artistic, activist landscape,” she said, per the paper.

The Irish Times noted that last week's arrests come amidst the ongoing trial for 11 prominent women's rights activists who were charged with violating Saudi Arabia's cybercrime laws in conducting their advocacy work denouncing Saudi Arabia's male guardianship laws, among other initiatives. Many of the activists on trial have been detained since last spring, though three, including Yousef, were recently temporarily released, NBC News noted. The outlet added that some of the individuals arrested last week had reportedly been supporting the activists who are on trial.

Yahya Assiri, the director of ALQST, expressed confusion to the New York Times when discussing last week's arrests, noting that it was strange that they came after Saudi Arabia had decided to temporarily release three activists from custody. "It’s just bizarre,” Assiri said to the paper. “They released Aziza [Yousef] and they arrested her son. I couldn’t understand that.”

It remains to be seen whether Saudi Arabia will comment further on last week's arrests or on the ongoing trial of the 11 women activists. Since the trial is largely closed to foreign journalists, it is unclear whether or not it's close to a conclusion.