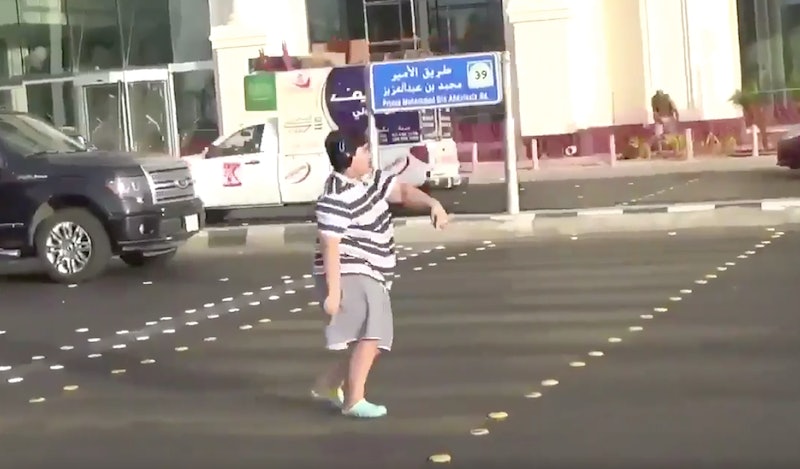 According to Bloomberg, a teenager was recently detained in Saudi Arabia after dancing to the Macarena. A video of the 14-year-old, in which he dances on a crosswalk in the Saudi Arabian port city of Jeddah while drivers waiting at a red light watch him, went viral after it was published last year, leading authorities to arrest him on Tuesday for violating public decency laws.

The boy has since been released without facing any formal charges, and Sabq Online Newspaper reported that the teenager's father promised to ensure his son respected these rules in future. The government-linked newspaper also referred to the boy as a legal Arab resident of Saudi Arabia. A Saudi Interior Ministry spokesman told CNN in a statement the teeanger and his guardian had signed a pledge stating that "that the teen will not engage in behavior that could endanger his life and the life of others again."

Col. Atti bin Attia Al-Qurashi, a Saudi police spokesman, reportedly told Sabq that the boy's dancing was “a disruption of traffic and violation of public morality." The Saudi Okaz newspaper reported that the teenager was "showing off" by dancing as a dare from his friends.

As the Washington Post pointed out, Saudi Arabia is currently at a crossroads between conservative traditional values and increased cultural stimulation. The Sunni kingdom's 31-year-old crown prince, Mohammed bin Salman, has encouraged cultural events like concerts, which were previously banned for more than 20 years. But the boy's arrest for dancing reveals that even with bin Salman's efforts, Saudi Arabia is still heavily influenced and governed by a tradition in which Western art — particularly music and dance — is not generally perceived as favorable.

Another example of the influence of tradition took place earlier this month, when a Saudi performer was reportedly arrested after "dabbing" at a concert. According to AJ+, the performer was detained because Saudi authorities believed that dabbing "encouraged drug abuse." Like the teenager in the Macarena video, the performer was later released.

According to the Washington Post and the Arab News, the public reactions to the boy's arrest were rather mixed. Some Saudis described the boy as a "hero" on social media, while others appeared to believe that he was "discourteous," and called for him to be punished. Many, however, seemed to agree that the teenager was just a kid who did not deserve to be arrested for his actions.