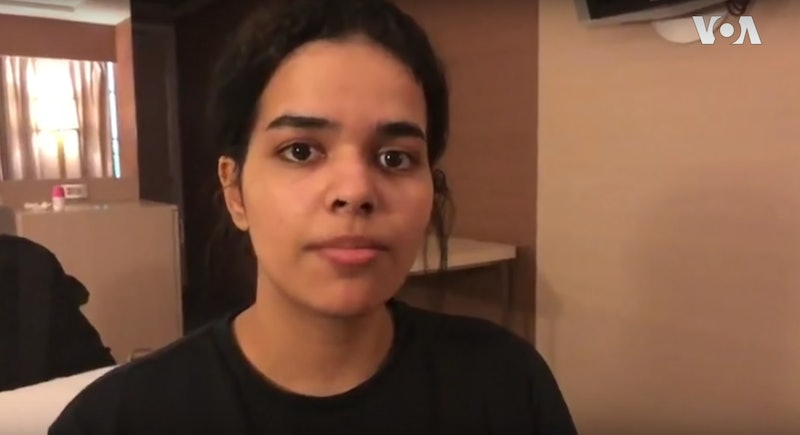 After spending two days pleading for freedom from an airport hotel in Thailand, Saudi teen Rahaf Mohammed Alqunun has been granted asylum in Canada. Alqunun had fled from her family and was attempting to seek refuge from them in Australia, but was stopped and detained en route by Thai authorities. For two tense days, Alqunun faced the possibility of deportation, which she believed would result in her death.

Alqunun accused her family of physical and psychological abuse, saying that they once locked her in a closet for six months for cutting her hair in a way they didn't approve. According to The New York Times, her father denied this. Saudi Arabia, a deeply patriarchal theocratic monarchy, doesn't allow female Saudis to leave the country without the permission of a male "guardian," but Alqunun was able to escape while her family was on vacation in Kuwait. She said in no unclear terms that she would be killed, either by her family or the Saudi government, if forced to return to her home country.

But from her hotel at the Suvarnabhumi Airport, Alqunun launched a social media campaign to rally support for her cause. This resulted in the United Nations granting her refugee status, and on Friday, Canadian Prime Minister Justin Trudeau announced that his country had granted her asylum.

After being detained at the airport in Bangkok, Alqunun was stopped by a group of men, who she believed to be Thai security officers. They told her that her family had filed a missing person's report and that she'd be forcibly flown back to them on Monday morning. Alqunun says that one of the men confiscated her passport, although Maj. Gen. Surachate Hakparn, the head of Thailand's immigration agency, told the New York Times that this wasn't the case.

In the meantime, authorities put Alqunun in a hotel room at the airport and didn't let her leave. From there, she used social media to draw attention to her case. Friends and activists deployed the hashtag #SaveRahaf to signal boost her detention, and Alqunun recorded videos detailing her alleged abuse in Saudi Arabia and treatment by Thai authorities.

On Tuesday, Alqunun's father — who Thailand's immigration chief said is a provincial governor in Saudi Arabia — and brother arrived in Bangkok. Her father attempted to convince Thai and UN officials that Alqunun needed medical treatment and should be returned to him and her brother, the Times reports. Alqunun, who has accused her brother of beating her regularly, refused to see either of them.

UNHCR, the United Nations' refugee agency, applauded the decision of the Canadian government to offer asylum to Alqunun, and confirmed that the 18-year-old "left Thailand en route to Canada today."

“Ms. al-Qunun’s plight has captured the world’s attention over the past few days, providing a glimpse into the precarious situation of millions of refugees worldwide.” UN High Commissioner for Refugees Filippo Grandi said in the statement. “Refugee protection today is often under threat and cannot always be assured, but in this instance international refugee law and overriding values of humanity have prevailed.”